Recessions are bad news. For most of us, anyway…

Recessions are bad news. For most of us, anyway…

A recession is a significant decline in economic activity. That may sound anodyne, like many financial expressions do. But the effects of a recession can be very nasty, ranging from widespread job losses to personal and corporate bankruptcies, slashed government spending, property price plunges and stock market crashes.

Most of us end up considerably worse off. In fact, the only people who flourish are the likes of insolvency practitioners and distressed debt buyers.

But we can help. There’s a great indicator that warns when the economy is set to crumble. And we have some sound advice about how to protect your wealth from the ravages of recession…

Stock markets have been too bearish

Predicting a recession can be a difficult business.

For example, it’s often said that the stock market has predicted nine out of the last five recessions. Put another way, it’s been too bearish almost half the time (and has then recovered when it realised it was being too pessimistic).

When people start spouting about inverted yield curves, it’s tempting to pour yourself another drink and do something – anything – more interesting.

But please bear with me for a moment.

The yield curve measures the difference between the returns paid on short and long-term government debt. It represents a split between the views of central bankers who set policy rates and bond markets that determine longer-run borrowing costs.

The latter will generally be higher than short-term rates. This is because they include the extra compensation that investors demand for the risk of locking away their money for a more extended period.

But this can change. If investors begin to anticipate weaker future growth than they’d previously expected, they’ll accept lower longer-run yields than before. If policy rates remain the same – or even nudge up – the yield curve will flatten.

If long-run yields drop below policy rates, the yield curve is said to ‘invert’. That’s the early-warning signal for a recession. And all of the last seven US recessions have been preceded by an inverted yield curve.

So what’s happening this time round?

Take a look at the following chart, for which I owe many thanks to Bloomberg: 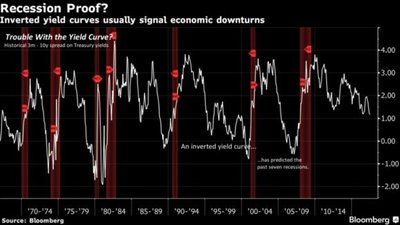 The white line is the one to watch. Measured by the scale on the right, it shows the difference in yields between US debt securities that mature in 10 years’ time and those with a three-month duration.

As you can see, that gap has now compressed to just over 1%. That’s down from almost 4% in the wake of the last recession.

It’s one heck of a move.

Two years ago, America’s central bank began its rate-raising process. This has picked up pace in 2017 and has filtered through into America’s government bond market.

The two-year US Treasury yield is now at its highest level since 2008. But 10-year yields are actually lower than they were a year ago.

One key element here is the profitability of commercial banks. These tend to borrow short-term and lend money over long periods. So a flattening yield curve is bad news for bankers.

And we know from a decade ago what happens if these financial institutions suffer. They have a knack of passing the pain round onto everyone else.

Investors are now preparing for a Fed funds rate hike in December and further rises in 2018 as inflation nudges higher.

In turn, Wall Street bank Morgan Stanley cautions that the US yield curve will flatten even more next year. It predicts the 30-year yield is heading for record lows of 2%.

That’s below the level of the global financial panic, “the euro-zone crisis or the height of enthusiasm for ‘secular stagnation’,” says chief cross-asset strategist Andrew Sheets.

Does the yield curve always get it right?

How good is the yield curve as a recession indicator?

Sure, as with everything else in economics, the situation is never quite as simple as it first appears. There are a few caveats, as Capital Economics notes.

The yield curve is a less reliable indicator outside the US. Economic growth can remain strong for a while despite a flattening yield curve. And inversions can over-predict recessions, or at least be very early indicators.

But the research team at Wells Fargo Securities has focussed on a specific aspect of the yield curve – the threshold between the Fed funds rate and the 10-year Treasury yield.

As the Fed funds rate rises, the threshold is breached when it touches/crosses the lowest level of the 10-year Treasury yield in that particular interest rate cycle.

When this has occurred in the past, the Wells Fargo measure has successfully predicted all recessions since 1955, on average 17 months ahead of the event. In contrast, the conventional inverted yield curve theory missed two recessions in that time-frame.

What’s more – and here’s the key bit – the Wells measure has predicted several recessions before the yield curve has started to invert. So it doesn’t need to wait for inversion to predict an economic downturn.

OK, maybe the Fed funds rate won’t be increased until 2017. Chances are, though, that this would simply delay the threshold breach. Or perhaps everything feels too good at the moment for a recession to start. But don’t be fooled by current trends.

A business cycle has “never gone longer than 8 to 10 years”, says Mark Vitner, Wells Fargo’s MD and senior economist. “Recessions start at the peak of the business cycle.”

In other words, watch out for the US Fed’s December move. It could be crucial.

What should you do to protect your portfolio?

As I explained in the DR last week, the next recession could well produce another round of negative interest rates. And these would be a great recipe for a major rally in…you’ve guessed it…gold.

Over to our own precious metals expert Simon Popple…

He believes he’s found a huge gold opportunity for you. More details soon.

The government needs to get housing right this time

Why I'd never recommend this dodgy biotech stock

Economy
Author Jim RickardsPosted on 15th November 2018
I don’t say that to be hyperbolic. I’m not looking to scare people. It’s just an honest assessment, based on the numbers.