“Would you accept unpopular and difficult ‘Thatcherite’ economic measures for four years if you believed they would restore the UK’s dignity and lead to true and consistent economic growth post-Brexit?”

That was the question we asked you in our recent poll. And the response has been amazing, for which many thanks. I can’t get anywhere close to publishing all your comments, so I’ve summarised a few below that represent your different views.

So what was the result of the poll?

Read on to find out…

And let’s start with some real doom and gloom from ‘M’ (not James Bond’s boss!)

“You’ve concentrated correctly on Britain’s economic stagnation”, he says. “Our productivity performance is dismal and much of that is due to two areas of socio-cultural demise. One is the lack of intellectual (and financial) investment in learning at the workplace. The second is the expectation of immediate success. This pervades the whole of British society. No one seems to want to work hard and improve.”

“We’re an absolute laughing stock around the world. An egotistical Tory party faction forced a referendum based on half-truths and lies, without a plan of what we’d want to achieve if we left a 480m populace market. The electorate had no idea of the consequences of leaving the EU but voted as a ‘mid-term’ against the government – and ‘jingoistically’. The Labour Party let Militant back into its structure and would want to take the country back to pre-Thatcher.”

“We are the sick man not only of Europe but the rest of the world. I am very pessimistic about our future. We do not have the drive or intellect to trade very successfully in the wide world. I’m even pessimistic about remaining in the EU – would you want a troublesome member like the UK? We will slip further and further down the order of economies and our influence at world forums will diminish.”

Wow! I’m often bearish, but even I’m not as depressed as that. Nor are others:

“Your article isn’t true”, says ‘U’. “The UK is doing better than ANY country in Europe. And Nancy Pelosi doesn’t speak for America, she was playing to the gallery when in Ireland. Trump hates her. The UK is only sick politically, thanks to the House of Commons and Labour in particular who have tried to use Brexit for their own ends and have not worked on behalf of the country. The Conservatives have done badly due to internal squabbling.”

‘V’ agrees. “I’m puzzled by the statements in your email – they’re almost completely erroneous. Productivity in the UK has not been in decline in recent years – quite the opposite. Also, Thatcher’s economics of monetarism were not based on Hayek’s hypothesis, but that of Milton Friedman. Friedman was a disciple of Hayek but his principles were later disowned by Hayek, who believed them to be crude.”

As does ‘R’, who says “I don’t agree with your accusation that the UK is the ‘sick man’ of Europe again. It’s Europe that is sick… I’d actually say that so is all the supposedly democratic developed Western World.”

But in the UK, “it’s becoming increasingly obvious that there’s a huge disconnect between politicians and the general public. British politicians no longer represent what were once-established groups defined by wealth or financial aspirations. Labour no longer truly supports the “working class”. Neither does the Tory Party support business and the so-called “middle class”. In fact the latter, much vaunted by Thatcher, is slowly but surely vanishing.”

“Our politicians support the agenda of the global elite, who’re getting richer by either moving work to where cheap labour is or cheap labour to where the work is. And the global elite are allowed by politicians to pay only a fraction of the tax they should, so the gap between ‘haves’ and ‘have nots’ just gets ever-wider. Meanwhile, productivity is getting worse all the time and not just in the UK (a point that’s usually overlooked, as you have on this occasion).

“If things continue as they are, we’re likely to see significant ‘civil’ chaos at best. Someone like Thatcher is exactly what we need right now!”

To clear up the productivity point: in the last five years, Eurozone productivity is up 3% while in the UK it’s improved by 3.7%. The US, in contrast, shows a 5.5% gain.

“The only way out of this dreadful impasse is for a visionary leader of the stature of Churchill or Thatcher to come forward with total focus, guts, determination and common sense to bang heads together and lead us to an honest, resolute and independently-successful future”, says ‘G’. “We’re still one of the greatest nations on earth but weakness and vacillation has been allowed to triumph. Let us replace all our leaders as soon as possible.”

But not every subscriber agrees about Mrs T…

“Although Thatcher’s policies resulted in significant economic benefits for many in UK society, it wasn’t the same story for everyone”, says ‘N’. “Many of the areas that were home to industries Thatcher shut down in the 1980s have never recovered from the extensive job losses and have suffered decades of poverty. Thatcher’s actions precipitated the start of ‘benefit culture’ with successive generations of families where nobody has ever had a job.”

“While we need renewal, revitalisation, fresh thinking and better leadership in the UK, I think a Thatcher-style period would only serve to deepen existing divisions.”

I’d say that most businesses that closed in the Thatcher era wouldn’t have survived much longer anyway. And with UK unemployment now at a 44-year low, surely some job opportunities have arisen for most families in Britain!

“Implying that Thatcherism offers the only answers to difficult problems, and that Thatcherites are the only people who can face up to hard decisions, is the worst kind of nostalgic nonsense”, says ‘J’.

“All the economic problems we have now, from socially-corrosive income inequality, lack of affordable housing and the exacerbated north/south divide, to asset bubbles, banks that are too big to fail, PFI financing and the creation of fake markets (such as train franchises) can be laid at the door of Thatcher and her Hayekian crusade. Thatcherism seems to me to be entirely the wrong hard choice to be calling for.”

All the problems? It’s almost 30 years since she was forced out of office. Even if the above issues were her legacy, surely we’ve had enough time sort them out since?

Anyway, this article stemmed from the Brexit debate, so let’s return to it now.

“I voted Remain and still would”, says ‘H’. “There are parts of European policy I disagree with such as the Common Agricultural and Fisheries Policies, but I think it better to argue from within. I believe we’d have more support now, especially from Northern Europe. By the way, polling of those too young to vote in the referendum shows a large majority in favour of Remain. Surely we should look to the future through the eyes of those who are the future.”

“I voted Remain but believe we have to carry Brexit through”, says ‘I’. “That’s democracy. Anyway, when (if) we Brexit, the UK should rip off the Swiss ideas of banking and become a bigger tax haven than all the others in the world put together. We have the means. Just need the will. The EU will moan and scream, then dump cash into the UK.”

And on the ‘young people’ front, ‘D’ asks “did you know as much about the world and politics when you were 20 years’ old?  I didn’t”.

Anyway, most of you remain in the Leave camp. Here are some of your views…

“The EU has shown its true colours… bullies, interested not in the economic health of its members but just in its ambition to enhance the federal cause and in its determination to keep the EU stitched together by making an example of us to deter other leavers”, says ‘ML’.

“The EU’s auditors still cannot account for billions of euro which get lost every year. Would the country’s remoaners join such an organisation if we weren’t already members? Would the remoaners like to see the influence of Parliament reduced to that of a parish council? Because that’s what will eventually happen unless we get out now.”

“It is time to make the UK great again. But to do so, we first have to remove from office the worst Prime Minister in living memory. I know we’re against our MPs, the Civil Service, the Bank of England and the Treasury, but for the sake of our country this is a fight we have to win. Brexiteers must up their game because we’re losing it.”

So what to do?

“Here’s a very simple solution”, says ‘J’. “Leave without a deal. Immediately declare that we won’t be charging any tariffs for anything from any European country – immediately solving the Ireland ‘hard border’ issue. Allow resident Europeans to stay if they wish. Europe would look very mean /stupid if it didn’t fully reciprocate. So no need for a customs union – which effectively leaves us ruled by Europe!”

That idea contains far too much common sense for our politicians to adopt it!

But is Brexit just a symptom of much greater issues? Some of you reckon so too.

“Brexit isn’t the biggest problem facing us”, says ‘S’. “A bigger threat to our well-being is the socialist idea that has crippled the UK by breeding a generation who are more intent on seeking state benefit than putting in their fair share of work. Whatever happens with Brexit, this problem will take generations to overcome, if at all. But getting out of the EU will give us a better chance.”

A nice controversial note on which to end!

Wait – I nearly forgot. Here’s the result of the poll. And I warn you – it’s quite a dramatic conclusion: 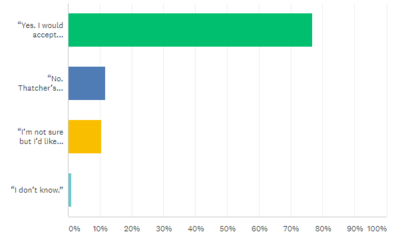 77% for Mrs T. Seems that for our readers, Thatcherism still rules, OK!

Prohibition Made Them Billions