What used to be Britain’s Budget Day has now been downgraded to the above, rather desiccated, title – the full UK Budget is now published in November.

But there’s still a choice to be made. Listening to Chancellor ‘Spreadsheet Phil’ Hammond at the House of Commons, or enjoying the Cheltenham Festival (to find potential winners before the festival ends tomorrow, check out this from our betting expert.

Tough one (not!). But someone here at Agora has to take a view on what the Spring Statement means for you. And yours truly has drawn the short straw. So here goes…

First, overall impressions. The usual form for official financial progress reports is that the government in power claims that it’s doing a good job. The opposition says precisely the opposite. Neither is usually correct.

The 2018 Spring Statement is no exception.

Mr Hammond was upbeat. He said the UK economy has reached a turning point and claimed that the 2017 +1.7% GDP growth rate, which compared with earlier estimates of +1.5%, showed that “forecasts are there to be beaten and we should make it our business to do it again“. Insisting there’s “light at the end of the tunnel“, he produced upgraded projections for growth while predicting falling inflation and borrowing.

Well, Mr Chancellor, you might be describing your current mood as “most positively Tigger-like“. Yet I’d hardly call 1.7% particularly praiseworthy growth. In fact, the UK’s doing worse than anyone else in the G7 group of leading countries.

Yeah, right. And how quickly would the economy implode if Jeremy Corbyn & Co. got into power and spent much more (borrowed) money like mad?

Oops, sorry, I’m at risk of getting into politics here. Which I try to avoid.

The bottom line is that there wasn’t much to see in the Spring Statement.

The papers that accompanied the Chancellor’s speech did include an alarming note that the UK will save no money from leaving the EU over the next five years. And that it could be paying its Brexit divorce bill until at least 2064. Even this latter point is illusory, though. In fact, almost all the separation costs will be paid by 2023. Financial forecasting, though, is big business. A whole army of analysts is employed to work out whether the

Due to shrinking confidence in UK Treasury estimates, nowadays the official forecasts are provided by the independent Office for Budget Responsibility.

And the OBR view is a bit non-committal, to say the least.

Although the UK “has slightly more momentum in the near term, thanks to the unexpected strength of the world economy, there seems little reason to change our view of its medium-term growth potential”, it says. “While the budget deficit looks likely to [be] almost £5bn lower this year than we expected in November, this implies smaller downward revisions for future years. The government’s headroom against its fiscal targets is virtually unchanged“.

That’s OBR-speak for ‘we can’t think of a good reason to change our forecasts’.

The OBR also says that Brexit “appears to have slowed the economy, but by less than we expected, thanks in part to the willingness of consumers to maintain spending by reducing saving. But it is important not to put too much weight on estimates of economic activity either side of the referendum…because ‘bottom-up’ measures of GDP growth differ [on] whether growth slowed, speeded up or remained stable between 2016 and 2017“.

That’s more OBR-speak for ‘we got it wrong but we’ve tried to find a good excuse’.

Britain faces a “woeful growth outlook by past standards“, according to one such observer, with “potentially massive dislocation for the economy just around the corner. And all subject to huge, Brexit-related uncertainties“. Indeed, economists generally didn’t share Mr Hammond’s sanguine stance.

So is it too kind to the Chancellor to call his Spring Statement a non-event?

For one thing, I’ve never bought into all the Brexit gloom. That’s not because I believe the government is doing a great job at the negotiating table. The real reason is that I’ve always seen the UK leaving the EU as more of a political than an economic event. It makes politicians feel more important than they really are.

Second, forecasts by the ‘experts’ are often well wide of the mark. And this is where the real problem for Britain lies, as I’ll come to in a moment.

To illustrate the point, perhaps the OBR’s best contribution to the Spring Statement was this brilliant chart: 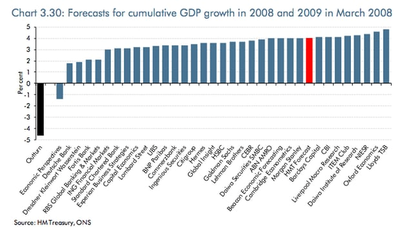 It’s largely self-explanatory. The names along the bottom axis are the great and the good of the financial forecasting community (including HM Treasury in red). And the columns indicate the various estimates for GDP growth in 2008+2009.

The black line on the extreme left shows what actually happened.

Only one of the assembled company – Economic Perspectives – was anywhere near getting it right. This truly horrendous forecasting failure was just a decade ago.

As the OBR notes, there have been seven recessions over the last 61 years. This suggests there’s a 50% chance of one occurring within the next five years. That doesn’t just apply to the UK, though. It’s a global concern.

To make matters worse, UK consumer credit is still growing at an alarming 9%-plus clip, some three times faster than either prices or wages. You won’t have heard about this in the Spring Statement, but it’s another major risk for Britain.

A cocktail of strongly rising debt and renewed recession would mean that all bets on the economy and the stock market would come right off. This remains a time to be very cautious in managing your portfolio.

The SEC lowers the boom on bitcoin

Will you choose to cash in on Canada's 'green rush'?

Economy
Author Pieter CranenbroekPosted on 17th July 20175th July 2018
The creation of crypto-currencies like bitcoin, which aren’t controlled by central authorities, is a game-changer.

Economy
Author Jim RickardsPosted on 12th April 20185th July 2018
One of the most famous passages in American literature occurs in Chapter 13 of Ernest Hemingway's The Sun Also Rises. It takes place in...