Uber and Volvo just officially unveiled their self-driving car (though we got a sneak peek of it last year when it was involved in a brief murder investigation).

The XC90 SUV was developed in partnership with Uber and Volvo, with the end goal being to “one day” replace Uber drivers with fully driverless cars.

(That’s what happens when you ask your employer to treat you like a human being. They replace you with a more efficient machine that doesn’t need healthcare or minimum wage.)

The reveal heavily emphasised the SUV’s various safety features, which would normally make for a pretty boring presentation. But the XC90 has killed before. And so investors need to be assured the murder mobile isn’t going to go on a killing spree once they set it loose on the road.

iRobot (didn’t do it): Last year, an XC90 on a test drive was in a fatal collision with a pedestrian. The car was equipped with Volvo’s collision avoidance system but was turned off for the test. After a brief investigation, the accident was found to be the fault of the test driver who was supposed to take over in an emergency but wasn’t paying attention.

The XC90 is capped at 90kph. And comes with backup and steering systems as well as a backup battery. If any one system fails, the others will take control of the vehicle and bring the car to a safe stop (theoretically).

“We believe autonomous-drive technology will allow us to further improve safety, the foundation of our company,” said Håkan Samuelsson, president and chief executive of Volvo. “By the middle of the next decade, we expect one-third of all cars we sell to be fully autonomous.” 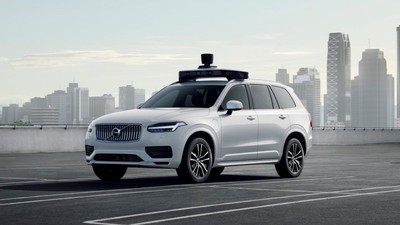 Notice this photo was taken in an abandoned parking lot — the only place this murder machine is legally allowed to drive around.

Despite some setbacks (killing that person), Uber has doubled down on this whole robocar thing, hiring a dedicated CEO for its autonomous driving division and injecting a whole boatload of cash into it.

The truth is self-driving cars are Uber’s only hope at becoming a functioning, profitable company.

When Uber disclosed it’s financial when it went public, we learned the company is hemorrhaging money and operating at losses of billions of dollars.

But if it could just get rid of those pesky little drivers (you know, the ones it built the company off the back of) Uber could actually have a working business model on its hands.

With a growing movement to treat Uber drivers like actual employees and give them minimum wages, vacation, and healthcare, the company is under some serious pressure to get its stupid robot cars working, and fast.

This announcement might tide over investors for now. But neither Uber nor Volvo could estimate when a fully driverless car would enter Uber’s rideshare network.

We’ve discussed driverless cars here before. But I haven’t gotten your take on them.

Do you see them catching on? Would you buy one yourself? Why or why not?

Tensions are high in the Gulf of Oman as another attack on two oil tankers drove oil prices higher (and oil tankers lower) this morning.

Two tankers carrying oil were attacked off the coast of Iran, echoing a similar attack in the region last month that has the U.S. military on high alert.

Both ships caught fire and were evacuated with the help of some passing ships. Despite substantial damage to the hull, there were no casualties and neither of the ships has sunk (yet).

An investigation will have to be conducted. But the early evidence suggests the tankers were struck with a sophisticated underwater weapon like a torpedo. (Or an Aquaman.)

Oil prices rose sharply in response, jumping about 4.5% to $62 a barrel in the morning trading.

About 40% of the world’s oil travels through the Strait of Hormuz which is bordered on either side by the United Arab Emirates and Iran.

If the route was to suddenly become inaccessible (because someone was, let’s say, blowing up all the oil tankers) the world’s oil supply would drop about 20% and drive oil prices through the roof.

Last month, four tankers were attacked in a similar incident.

An investigation conducted by the UAE and Norway (what are you doing out here, Norway? Go back to Scandinavia) was inconclusive.

But the Trump administration blamed attacks on Iran who were allegedly retaliating to harsh sanctions the U.S. has imposed on the Middle Eastern country.

Since then, the U.S. military has beefed up its presence in the Gulf of Oman, including an aircraft carrier, the USS Abraham Lincoln (named such because it has the same signature stove-pipe hat as the old Illinois rail splitter).

Iran has denied involvement in both of the attacks. But they have threatened to cut off the flow of oil through the Strait in the past.

For now, the White House is playing its cards close to its chest. But there’s a very real possibility that a full-blown conflict could erupt in the region any day now.

“The President has been briefed on the attack on ships in the Gulf of Oman,” said White House press secretary Sarah Sanders. “The U.S. Government is providing assistance and will continue to assess the situation.”

Beto O’Rourke: Biden Will Take Us Back to the Past

Beto O’Rourke says that Joe Biden is stuck in past.

Instead of throwing their vote away on a return to past ideals, the Dems should be voting for someone a little more progressive. (But not too progressive, of course. Beto’s still a straight white guy from Texas, after all.)

“We cannot return to the past,” said O’Rourke, who has clearly never seen Back to the Future, on MSNBC’s Morning Joe.

Now, as someone who historically votes more conservative than your average Democrat, Beto isn’t that much more “progressive” than Biden.

He’s certainly younger than Biden (most people are). And he’s picked up some Bernie-esque talking points ripped straight from Sanders’s 2016 campaign. But he’s really not the radical progressive he’s pitching himself as, especially compared to Sanders, Warren, and Harris.

The only reason he’s taken aim at Biden is simply because the old man has emerged as the clear front-runner in the Democratic primary (without having to lift a finger).

Right now, Biden’s like an elephant and all the other Dems are the lions who have to work together to take him down. And Beto’s doing his part, even if his shot at the Oval Office is slim.

O’Rourke had some momentum from his grassroots campaign for the Senate (which he lost by a narrow margin). But that’s all but dissipated by now.

In a recent poll, only 2% of Iowa Dems say O’Rourke would be their first choice for the primaries, dropping from 11% in December.

O’Rourke isn’t deterred, however. He told George Stephanopoulos on ABC’s This Week that he doesn’t pay any mind to the polls (which is not a great way to run a political campaign).

How to Predict the Future

In yesterday’s edition of One Last Thing, we took a look at the Good Judgement Project and their superforecasters, who can predict world events with 30% more accuracy than U.S. intelligence.

According to the GJP, anyone can become a superforecaster. You don’t need to be super intelligent or well read. You just need to cultivate four specific qualities and even you could be out forecasting the U.S. militaries intelligence.

[Ed Note: Instead of your usual issue tomorrow, we’ve got a special interview with one of the great tech forecasters of the internet age, George Gilder. George predicted the iPhone in his 1990 book Life After Television and tomorrow he’ll tell us how he makes his predictions.]

To become a superforecaster, you should:

Change your mind frequently, and in small bits. One of the best things you can do as a forecaster is to change your mind (a lot). This is why experts often get their predictions wrong. When you know a lot about a subject, you can get emotional, biased, and stuck in your ways (which is bad for forecasting). However, with an open mind you can spot the little changes as they’re happening.

That said, the GPJ says you shouldn’t flip flop every time you get a new piece of information. You should change your mind slowly, bit by bit over time, as you get more information.

Work in a team. Forecasters benefit from hearing different perspectives, opinions, and ideas. According to the GPJ, forecasters who engage in a team conversation are much better at predicting the future than those who worked on their own.

Know a little. While the superforecasters come from all walks of life, you’re more likely to make good predictions if you stay current on world politics and brush up on some probability theory. That said, many of the GJP’s forecasters had never even cracked a math book or read the news before they started predicting.

Drinking Straight From the Data Hose

Your views on Woodford… and more Brexit responses

Economy
Author Kit WinderPosted on 8th April 20208th April 2020
“When the time comes to buy, you won’t want to.” I love that quote, and I only learned it this morning! It can be...

Economy
Author Shane OrmondPosted on 31st July 20192nd August 2019
Apple proudly accepted its Q3 participation trophy yesterday, banking a 4% gain in after-hours trading for a quarterly report that was not as god...

Economy
Author Kit WinderPosted on 12th August 202013th August 2020
A man named Burton Malkiel once claimed that a monkey throwing darts at lists of stocks could hit on a portfolio just as good...