Turkey is a beautiful country with a rich history including Greek, Roman and Muslim influences that make it one of the most fascinating places on Earth

Turkey is a beautiful country with a rich history including Greek, Roman and Muslim influences that make it one of the most fascinating places on Earth. It is literally a bridge between East and West: The mile-long Bosporus Bridge just north of Istanbul connects Europe and Asia across the Bosporus Strait.

Turkey has been a magnet for direct foreign investment from abroad and dollar-denominated loans by international banks to local enterprises. This investment enthusiasm is understandable given Turkey’s well-educated population of 83 million and its rank as the 17th-largest economy in the world, with a GDP of just under $1 trillion.

The flood of bank lending and direct foreign investment has given rise to another flood of hot-money portfolio investors in Turkish stocks chasing high returns with cheap dollar funding in a variation of the global carry trade. So-called emerging-market (EM) funds offered by Morgan Stanley, Goldman Sachs and others are stuffed full of Turkish stocks and bonds. 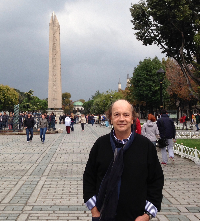 Your correspondent in central Istanbul, Turkey, on the site of the ancient Hippodrome, where chariot races were still held in late antiquity. In my many visits there since 1996, I have observed Turkey’s shift from a firmly secular society to one dominated by religious and authoritarian rule. As Turkey turns its back on Western society, it still relies on Western institutions to deal with potential debt, currency and reserve crises. Turkey’s new alienation from the West may mean that Western help will not be available in a future financial crisis.

But there’s a dark side to this seeming success story. Turkey’s external dollar-denominated debt is so large that a combination of rising U.S. dollar interest rates and a slowing global economy could quickly turn Turkey from model EM to the canary in the coal mine of the next great global debt crisis.

The risk of a major debt crisis beginning in Turkey is heightened by the rise of Turkey’s President Recep Tayyip Erdoğan as an autocratic strongman in the mould of Argentina’s Juan Perón and other populist nationalists who have ruined strong economies.

Both kinds of debt are problematic. The lira debt is a growing burden because lira interest rates have skyrocketed from 6% to 12% in the past five years.

The foreign currency debt is problematic for two reasons. The first is that the lira has devalued from 1.75 to 3.89 to the dollar since 2013, which increases the amount of lira needed by local companies to repay their external debt. The second reason is that U.S. and euro interest rates are starting to rise, which also makes the external debt burden more difficult to service.

Turkey’s hard currency reserve position is adequate for the moment, with about 100% coverage of foreign debt. The problem is not an immediate debt crisis but the likelihood that foreign credit could dry up or reserves could drain quickly, leading to a tipping point and a rapid loss of confidence.

Unfortunately, there are numerous economic and geopolitical catalysts for such a loss of confidence. The principal catalyst is a sharp deterioration in Turkey’s relations with the West and increasing links between Turkey and Russia that could lead to a crisis.

Another irritant is the widespread belief in Turkey that the U.S. played a role in the attempted military coup d’état against President Erdoğan in July 2016. This suspicion is heightened by the fact that the U.S. refuses to extradite Erdoğan’s political enemy, Fethullah Gülen, who lives in exile in Pennsylvania.

Erdoğan alleges that Gülen tried to force him from office in 2013 based on false charges — what Erdoğan called a “judicial coup.” The combined impact of a so-called judicial coup and an actual military coup attempt have led to profound distrust between the U.S. and Turkey.

The U.S. court system is also currently hearing a trial in which a Turkish-Iranian gold dealer, Reza Zarrab, has turned state’s witness and is providing testimony involving bribes and kickbacks by the Erdoğan government.

The U.S. government’s main charge is that Turkey helped both Russia and Iran avoid U.S. government economic sanctions. A newly passed Russian sanctions bill would impose severe penalties on Turkey if it goes ahead with a proposed purchase of Russian anti-aircraft systems.

A more serious point of contention between the U.S. and Turkey involves the role of the Kurds in Syria. From Turkey’s perspective, the Kurds are a separatist movement that threatens the territorial integrity of Turkey. The most extreme Kurds are pushing for an independent Kurdistan that would include parts of present-day Turkey, Syria, Iraq and Iran.

From the U.S. perspective, the Kurds are a potent fighting force who have been instrumental in the decimation of ISIS and are now playing a key role in support of

Syrian freedom fighters opposing the regime of Syrian President Bashar al-Assad. The Kurds are bitter enemies of Turkey and good friends with the U.S.

Another confrontation between the U.S. and Turkey is emerging over the status of Qatar. Saudi Arabia economically isolated and physically blockaded Qatar because of its support for terrorists and Islamic radicals. The U.S. has tried to mitigate this conflict but on balance supports the Saudi position.

Turkey has come to the aid of Qatar with both financial support and a military presence. A war between Saudi Arabia and Qatar would, in effect, be a proxy war between the U.S. and Turkey, two erstwhile NATO allies.

In short, U.S.-Turkish relations are at their lowest point since the breakup of the Ottoman Empire in 1922.

This deterioration in relations has important economic implications. If Turkey were to find itself in financial distress — a highly likely outcome in the near future — the usual place to turn for a financial lifeline is the IMF. However, the U.S. and its Western allies, especially Germany, have effective veto power over IMF bailouts.

The U.S. might demand conditions on any IMF assistance to Turkey in the form of compliance with Russia sanctions. Turkey would likely reject such conditions leading to an impasse on the subject of IMF aid. 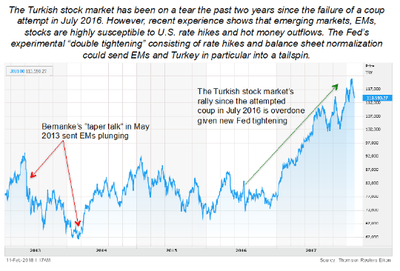 With geopolitical tensions rising and the U.S. aggressively tightening monetary policy, what are the prospects for the Turkish lira and Turkish markets in the months ahead?

The single most important trend is Turkey’s growing isolation from the West at the same time that Turkey’s external debt burden spirals out of control.

The geopolitical issues noted above — involving Syria, Qatar, the Kurds, Russia and Iran — could lead to a sharp break in U.S.-Turkey relations and Turkey’s departure from NATO. President Erdoğan is strong-willed but also defiant and stubborn in the face of what he regards as the infringement on Turkey’s sovereignty by the U.S. and Europe.

Far from negotiating with the IMF in the event of distress, Erdoğan could easily impose capital controls, which would effectively be a default on all external debt and lock all equity investments in place with no ability to cash out for dollars. Turkish stock and bond markets would plunge at best or cease to function at worst.

The situation in Turkey is uncomfortably close to the situations that arose in Thailand in 1997 and Russia in 1998 in which both countries closed their capital accounts after attracting billions of dollars in foreign loans and investment. Those Thai and Russian defaults precipitated one of the most acute and dangerous liquidity crises in world history.

Just the existence of these geopolitical fault lines and potential financial defaults is enough to slow down new investment and loan rollovers in ways that make a credit crisis in Turkey even more likely.

How to protect your portfolio from the next banking crisis

Don't let the dragon fool you...

Economy
Author Shane OrmondPosted on 18th November 201919th November 2019
TikTok Seeks to Distance Itself from Chinese Roots TikTok, the latest social media app I’m too old and angry to understand, is attempting to...

Economy
Author Pieter CranenbroekPosted on 27th April 20165th July 2018
Companies are curbing employee perks to offset them having to pay the living wage. When it comes to profits, is enough ever enough?

Economy
Author Sean KeyesPosted on 10th January 20185th July 2018
Larsen is the co-founder of a cryptocurrency called Ripple. In the last few months Ripple has gone absolutely nuts, even by crypto standards. It’s...