The TSA (U.S. version of British Airport Security) has made its stance on traveling with marijuana clear:

It’s fine. As long as we don’t find it. If we do find it, it’s not fine. Although it might be fine. It depends on the situation. (Crystal clear, right?)

In a recent post on its Instagram (which is where I get all my clarifications on complex drug law), the TSA wrote:

“Are we cool? We like to think we’re cool. We want you to have a pleasant experience at the airport and arrive safely at your destination. But getting caught while trying to fly with marijuana or cannabis-infused products can really harsh your mellow.”

Like all good writers, I usually like to pepper articles on marijuana law with bad weed puns. But the TSA is kinda ruining it for me today.

“Let us be blunt. TSA officers DO NOT search for marijuana or other illegal drugs. Our screening procedures are focused on security and detecting potential threats. But in the event a substance appears to be marijuana or a cannabis-infused product, we’re required by federal law to notify law enforcement. This includes items that are used for medicinal purposes.”

The only U.S. agency that has seen you naked says that this includes narcing on passengers who are flying between two states where weed is legal. (Because crossing state lines with a Schedule 1 drug is a federal offense.)

However, law enforcement officials from legalised states chimed in with their two cents. And while the law varies state to state, the general consensus is if you’re carrying less than the legal amount (and you’re not a jerk about it), you’ll get a small fine at most.

Some airports, like McCarran International in Las Vegas, has established “amnesty boxes” where folks leaving the state can dispose of their weed at any time without fear of legal repercussions. 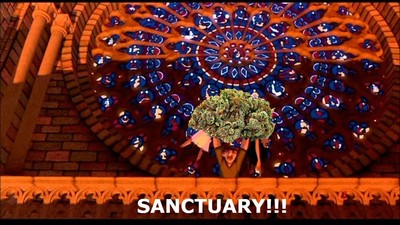 This image is pretty self-explanatory, I think.

If this sounds like the TSA and local law enforcement are sending mixed messages, it’s because they 100% are. (Just tell Vanessa you like her, TSA!)

But the clumsy handling of this situation is just a reflection of the legal limbo marijuana is currently in.

Since the passage of the Controlled Substances Act in 1970, marijuana has been classified as a highly illegal Schedule 1 drug. But as one famous weed smoker once said, “the times they are a-changin’.” And the law is “a-changin’” along with it.

In the last decade, 33 U.S states have legalised the medical use of marijuana, while 10 states have made it fully legal for anyone to buy and consume marijuana. (And to eat an entire bag of Taco Bell and watch eight hours of cartoons afterward.)

According to a Gallup poll, national support for legalising marijuana at the federal level is at a record 66%. And the STATES Act, a bipartisan bill that would leave marijuana enforcement up to the states, could pave the way for widespread legalisation.

Even the cops and TSA can see full marijuana legalisation is on the way. But most investors are too stuck in their ways to see the explosive potential.

In those-darn-millennials-are-ding-donging-up-the-country news, young folks just ain’t poppin’ them out like they used to.

According to a new report by the CDC, the U.S. birthrate is at its lowest point in 32 years. Not since 1986 has the birthrate been so low (and that was due to everybody still being grossed out by New Coke).

That may seem like a lot of babies. But the U.S. economy is a ravenously hungry machine, and it gets kinda logy without a fresh injection of workers every year.

Economists are worried that if we don’t start making babies hard and fast, the U.S. economy is going to have a serious shortage of workers in 25 to 30 years.

Without the workers to drive the economy, economic growth will slow substantially.

But on the bright side, those babies will probably be statistically happier than the current generation. In the past, low population generations have been less productive but reported a higher level of happiness.

(Fewer people means less competition, which means you can get a great job even if you kinda suck at it.)

Our sports teams will probably suck and the wheels might fall off the economy. But at least they’ll have a better time than the miserable millennials (whose entire concept of humour is restating that they want to die in as many ways as possible on Twitter).

The future of product placement is celebrity suicide notes.

In fact, according to the experts, millennials’ gloomy outlook is at the heart of the population decline. Young adults don’t have kids unless they’re optimistic about the future (see above tweet).

On the bright side, the rate of teen births fell 7% in 2018 to 17.4 births per 1,000 teenagers. That represents a 72% drop since 1991, when kids were having so many babies we had to give them their own TV shows. (Hey, maybe Alabama’s lawmakers just want another season of 16 and Pregnant.)

In the worst piece of television since last week’s episode of Game of Thrones, House Dems are live casting a reading of the entire redacted Mueller Report.

Democratic Rep. Mary Gay Scanlon, who organised this little slam poetry session told the Washington Post “the American people need to hear from the report itself. Summaries won’t do.

“We’ve been saying for weeks that if you think there was no obstruction and no collusion, you haven’t read the Mueller report. So the ongoing quest has been, ‘How do we get that story out there while we are waiting for the witnesses to come in?'”

The reading is currently taking place in the House Rules Committee Room inside the capitol. The 448-page report (including redactions) will take about 12-14 hours to read and will be split between a roster of (all Democrat) volunteers. 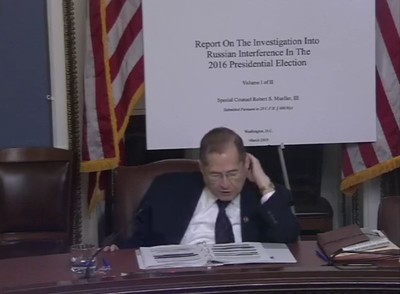 Did the Dems accidentally get their sign printed as a giant business card?

I briefly checked in on the feed this morning to hear Dems say the word [redacted] over and over again. But I couldn’t put up with the droning monotone for more than five minutes.

If the Dems actually wanted to bring attention to the report, they should have hired a celebrity or at least someone with a drop of personality to read the report. (Admit it. You would tune in for Kanye reading the Mueller report.)

You can check out the live stream for yourself here. They’ll probably still be at it until the wee hours of the morning. Don’t worry if you miss it though.

When they’re done, they plan to turn the recording into the worst audiobook since Gilbert Gottfried read 50 Shades of Grey.

Purdue University launched the program in 2016, which means it’ll be a while if we have any data on if they are working or not. But the first recipients, of which there were 500, have already graduated and entered the workforce.

One student who spoke with NPR received $50,000 directly from Purdue. In exchange, she has promised to pay 15% of her income for eight years after she graduates.

After that, she’ll be done with her loans no matter what. But is there a downside to this concept that’s being overlooked? One that could severely damage the U.S. education system?

We’ll discuss this more in tomorrow’s One Last Thing.

Don Jr. Headed for the Senate

Could Brexit be cancelled?

Economy
Author David StevensonPosted on 14th June 201920th June 2019
It’s mailbag time again – which is when I address some of your replies (for which many thanks) to recent articles, as well as...