The list of bad acts laid at Putin’s feet is much longer than the one just recited, but you get the idea. He’s no Mr. Nice Guy. 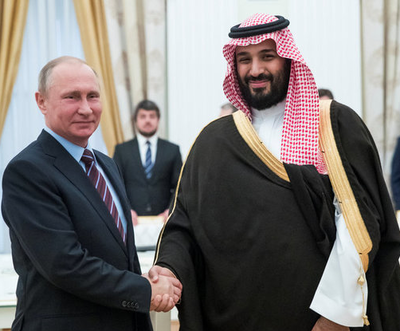 Vladimir Putin, president of Russia and newly elected to a six-year term, meets Mohammad bin Salman, the crown prince of Saudi Arabia and de facto ruler. Russia and Saudi Arabia are two of the three largest oil producers in the world, along with the United States. Their success in maintaining higher oil prices has given a boost to both economies.

At the same time, the country of Russia is more than Mr. Putin, despite his authoritarian and heavy-handed methods. Russia is the world’s 12th-largest economy, with a GDP in excess of $1.5 trillion, larger than many developed economies such as Australia (No. 13), Spain (No. 14) and the Netherlands (No. 18).

Russia has the largest landmass of any country in the world and a population of 144 million people, the ninth largest of any country. Russia is also the third-largest gold-producing nation in the world, with total production of 250 tons per year, about 8% of total global output and solidly ahead of the U.S., Canada and South Africa.

Contrary to many analysts’ perceptions, Russia is on a sound financial footing. Russia’s government debt-to-GDP ratio is 12.6%, which is trivial compared with 253% for Japan, 105% for the United States and 68% for Germany. Russia’s external dollar-denominated debt is also quite low compared with the huge dollar-debt burdens of other emerging-market economies such as Turkey, Indonesia and China.

Under the steady leadership of central bank head Elvira Nabiullina, the Central Bank of Russia has rebuilt its hard currency reserves to $455 billion after those reserves were severely depleted in 2015 following the collapse in oil prices that began in 2014.

Even as Russia’s foreign exchange reserves dropped from $525 billion in late 2013 to $355 billion in mid-2015, Nabiullina never stopped acquiring gold for the central bank. Total gold reserves rose from 1,275 tons in July 2015 to almost 1,900 tons today. Russia’s gold-to-GDP ratio is the highest in the world and more than double those of the U.S. and China.

Russia’s exports are not highly diversified, consisting mostly of oil and natural gas. Still, Russia is highly competitive in the export of nuclear power plants, advanced weaponry and agricultural products. This export sector produces a positive balance of trade for Russia, currently running at over $16 billion per month. Russia has not had a trade deficit in over 20 years.

More to the point, Russia is a nuclear superpower on par with the United States and well ahead of China, France, the U.K. and other nuclear powers.

In short, Russia is a country to be reckoned with despite the intense dislike for its leader from Western powers. Russia is rich in natural resources, financially sound and a nuclear superpower.

It can be disliked but it cannot be ignored.

Russia is even more important geopolitically than these favorable metrics suggest. Russia and the U.S. are likely to improve relations and move closer together despite the current animosity over election meddling and the attempted murders of ex-Russian spies.

The reason for this coming thaw has to do with the dynamics of global geopolitics. There are only three countries in the world that are rightly regarded as primary powers — the U.S., Russia and China. These three are the only superpowers.

In any three-party dynamic, whether it’s a poker game or a struggle for global control, the dynamic is simple. Two of the powers align explicitly or implicitly against the third. The two-aligned powers refrain from using their power against each other in order to conserve it for use against the third power.

Meanwhile, the third power, the “odd man out,” suffers from having to expend military and economic resources to fend off adventurism by both of its opponents with no help from either.

China is the greatest geopolitical threat to the U.S. because of its economic and technological advances and its ambition to push the U.S. out of the Western Pacific sphere of influence. Russia may be a threat to some of its neighbors, but it is far less of a threat to U.S. strategic interests.

Therefore, a logical balance of power in the world would be for the U.S. and Russia to find common ground in the containment of China and to jointly pursue the reduction of Chinese power.

Instead, the opposite seems to be happening. China and Russia are forging stronger ties while the U.S. finds itself at odds with both Russia and China over different issues. This two-against-one strategic alignment of China and Russia against the U.S. is a strategic blunder by the U.S.

As China’s power expands and as U.S. power is put to the test in Asia, it is likely that the U.S. will correct its recent strategic shortsightedness and find ways to work with Russia. This will not be done out of wishful thinking about the true nature of Putin or his regime but as a simple matter of geopolitical necessity.

With this economic and geopolitical backdrop in mind, what are my predictive analytic models saying about the prospects for the Russian economy and its markets in the months ahead?

Right now, the Russian economy is poised for strong growth, which will be reflected both in higher Russian stock prices and a stronger Russian ruble. 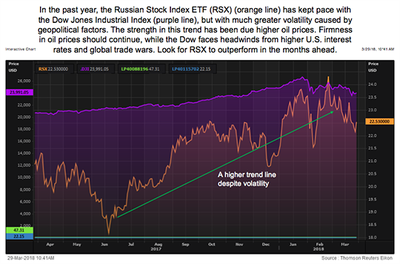 The biggest single factor leading to this conclusion is the high level of real interest rates in Russia.

Right now, the central bank policy rate in Russia is 7.25%. Inflation is only 2.20%, slightly higher than in the U.S. and Europe but rock-bottom compared with many past inflationary episodes in Russia.

This high real rate gives the Central Bank of Russia enormous ammunition to stimulate the Russian economy with a series of rate cuts. At a time when other major central banks such as those in the U.S., U.K., Japan and Europe are taking steps to tighten monetary policy through rate hikes, forward guidance or asset purchase tapers, Russia will be the only player that can actually produce monetary ease.

Also, Russia’s success in working with OPEC, especially Saudi Arabia, to maintain oil production quotas has put a floor under oil prices for the time being. This means that Russia’s reserve position will continue to grow. This gives the Central Bank of Russia room to cut interest rates without having to worry about capital outflows and a weak ruble.

This coming policy ease and stimulus from the Central Bank of Russia will be a major catalyst for capital inflows and a much higher Russian stock market. Improved relations with the U.S. will be a further tail wind for Russian stocks.

Tariffs are as American as apple pie

Is this the moment of truth?

Economy
Author Pieter CranenbroekPosted on 25th October 201825th October 2018
What does it take for governments to start acting more decisively against the ever relapsing banking industry?

Economy
Author Sean KeyesPosted on 27th June 20165th July 2018
British people slept 35 minutes less than usual on the night of the referendum vote. One thing you musn't do: panic.