Global stock indexes were hammered by heavy selling this morning, as U.S.-Chinese trade negotiations did their best impression of a New Jersey dumpster fire.

Early this morning, while I was wrapped up in bed dreaming of a world without Twitter, the Chinese Yuan slid 1.9% to an all-time low.

Chinese officials had the genius idea to call out President Trump as the cause of the historic slump. (While China has a rich culture of proverbs and sayings, apparently “don’t poke the bear” ain’t one of them.)

According to a statement from the People’s Bank of China, the Yuan’s drop was “due to the effects of unilateralist and trade-protectionist measures and the expectations for tariffs against China.”

President Trump was up bright and early to respond to the accusations, make some accusations of his own, and get everybody real concerned about this whole trade war thing.

Investors are watching this closely for subtle hints on how the U.S.-China trade negotiations are going. (And this morning’s display of diplomacy was about as subtle as Jeff Ross with a megaphone.)

The President’s tweet (also the name of the movie adaptation of the Trump presidency) also took a swipe at his favourite punching bag, the Federal Reserve.

Last week, the Fed cut rates for the first time since 2008. While the economy appears healthy according to some traditional models, under the hood it’s not behaving as you’d expect. (Like that kid who the doctor says is totally fine but, damn, he can put a lot of crayons up his nose.)

This tweet confirms that Trump is putting pressure on the Fed to make another cut, and sooner rather than later. And it doesn’t bode well for a speedy resolution to the trade war. (Or Jerome Powell’s stress-induced indigestion.)

We’re going to touch on the effects of a prolonged trade war in today’s second article, continued below.

Analysts Predict Recession in 9 Months if Trump Does This

Morgan Stanley says we are headed for a global recession in nine months’ time if President Trump escalates tariffs on Chinese consumer products any further.

President Trump said he will impose a 10% tariff on $300 billion of Chinese goods in September if China doesn’t follow through with its promise to buy a whole bunch of U.S. agricultural products before then.

In a note to clients, Morgan Stanley says that these tariffs might be tolerable if they’re in place for a short time. But if they’re still active after four or five months, global growth will remain weak. (And we all know what weak global growth means. Earth won’t be tall enough to compete in the Intergalactic Basketball League next year.)

Morgan Stanley (or the couple of guys that represent Morgan Stanley) said that if Trump imposes the 10% tariffs, China is likely to retaliate. And if China retaliates, Trump will probably raise the tariffs to 25%.

And that’s when the world explodes.

Okay, maybe the world doesn’t explode explode. But Morgan Stanley is making the case that a 25% tariff on Chinese-made consumer products would plunge the world economy into recession in three quarters or less (or your money back!).

At Least 31 Dead from Mass Shootings Over Weekend

(Ed Note: The information in this article is presented without the usual One Last Thing brand of humor and commentary. I’m sure you understand why.)

Over the weekend, we had two brutal mass shootings in a space of fewer than 24 hours.

In Dayton, Ohio, a 24-year-old white male rushed a bar with an assault rifle, killing nine people including his sister.

In El Paso, Texas, a 21-year-old white male opened fire in a crowded Walmart, wounding 26 and killing 22. (For now. The death toll rose twice since I first wrote this number.)

I’ll not be mentioning their names here. It’s well documented that printing the murderer’s pictures and naming them galvanizes support for their cause and increases the rate of attacks. Though the entire mainstream media seems to have conveniently forgotten that fact.

The El Paso gunman drove 1,000km from his hometown in the suburbs of Dallas to target citizens at this specific Walmart… just 8km from the Mexican border.

Many of the victims were Hispanic immigrants or Mexican citizens who crossed the border for the day to do a bit of shopping in the tenth largest supermarket in the U.S.

Before the attack, he posted a hate-filled, anti-immigration manifesto on website 8chan which railed against the “Hispanic invasion of Texas.”

President Trump, who has been criticized by Democrats for racist and anti-immigrant rhetoric in recent weeks, called for the nation to come together to condemn white supremacy.

“In one voice, our nation must condemn racism, bigotry and white supremacy — these sinister ideologies must be defeated,” said the president at a White House press briefing this morning.

“Hate has no place in America. Hatred warps the mind, ravages the heart and devours the soul.”

The El Paso gunman’s manifesto is the third white-nationalist document this year to be published on 8chan, moments before a mass shooting event.

Both the attack at Christchurch, New Zealand and the synagogue shooting in Poway, California were announced on 8chan — accompanied with racist manifestos designed to “go viral” and bring as much attention to the shooters as possible.

At its core, 8chan is an unmoderated forum. But it’s become a home to several poisonous communities, among them white nationalists, incels, pedophiles and every variety of hateful, racist ideology under the sun.

The San Francisco company that provides network services for 8chan pulled its support for the website yesterday.

The site has been down since, but will probably be back up once it finds a competitor to host the site (which is exactly what happened when the neo-Nazi website the Daily Stormer went through the same thing two years ago.)

Even if 8chan can’t get back up and running, which is unlikely, its users will just migrate to somewhere else. So expect to be hearing from those human wastebags sometime soon.

Although the economy appears healthy, anxiety concerning trade tensions and a global economic slowdown has turned the superrich super cautious.

The group, known as Tiger 21 (when you’re a billionaire, you can call yourself whatever stupid name you want) has moved away from equities and increased their investment in real estate to 28% of their total allocations. 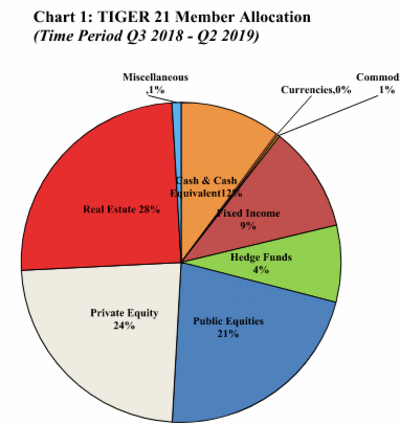 Investment in commodities crept up from 0% to 1%, suggesting that some of these ultra-rich folks are digging in for a storm.

And if today’s market performance is anything to go by, they may be right.

TRADE WARS 2: The Revenge of the Tariffs

The "Miserables" Launch a Rescue Mission

Economy
Author Jim RickardsPosted on 30th November 20165th July 2018
The global elites are using negative interest rates and inflation to make your money disappear.
Economy
Author Kit WinderPosted on 17th April 202017th April 2020
Why do we only get bulls and bears? We are all badgers now, digging into our setts with whomever we were stuck with when...

Economy
Author David StevensonPosted on 28th March 20185th July 2018
The UK itself has just been voted the most hated stock market around. And history shows that such a degree of dislike is often...