I was giving out about Theresa May’s terrible performance on Friday, but in fairness I doubt I could do better.

I was giving out about Theresa May’s terrible performance on Friday, but in fairness I doubt I could do better.

She’s in an impossible position.

The fundamental problem is the gap between what the UK wants, and what it can have.

Contra Boris “have your cake and eat it” Johnson, there will be losers from Brexit. In a couple of years’ time when this is all over, there are going to be some unhappy people.

The question is who.

So what does the UK want? It seems to me the UK has six objectives.

The first one is staying in the single market for services. The single market lets UK bankers, lawyers etc easily sell their services in the EU. These are important because services are the UK economy’s speciality — things like banking, accounting, architecture, consulting, law. Services make up 80% of the economy, and service exports to the EU are worth £50-60bn per year.

Here’s a diagram showing UK service exports to Europe. A lot of money is at stake here. 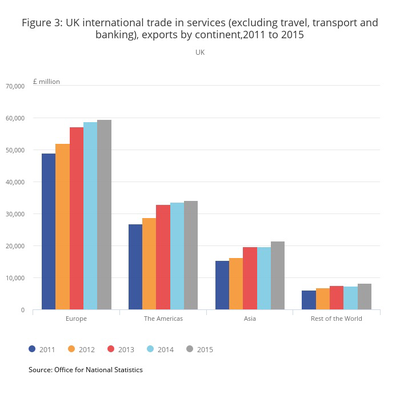 The second one is staying in the single market for goods. This basically means “no delays and tariffs at Calais”. This is important for British farmers and manufacturers. These days things like Nissan cars or Airbus planes are made using “just in time” manufacturing. This means different components of the finished product are put together in different countries, and assembled at just the last second. Delays and tariffs at border crossings won’t work for just in time manufacturers. And likewise, UK farmers would struggle to sell into Europe.

The fourth is control over immigration. Membership of the EU means free movement of labour across the continent. This means workers and retirees can move freely from Poland to Britain, or from Britain to Spain. For context: in 2016, 588,000 people moved to the UK, of which 250,000 were EU citizens.

The fifth priority is the ability to make independent trade deals. As a member of the EU, Britain can’t make independent deals with other nations. It trades on terms the EU negotiates. Brexiteers like the Brexit minister David Davis have said Brexit will give the UK the freedom to form new trade deals which are more tailored to the UK’s strengths (one problem with that is he said Britain could form separate trade deals with EU nations; that’s impossible though for the reason that Britain can’t do deals as things stand). The idea here is that Britain could rebuild its ties to commonwealth countries and other countries around the world.

The sixth priority is freedom to ignore the European Court of Justice. The ECJ is the highest court in Europe. Its job is to interpret whether EU law is being applied properly within the states. And it can supersede national courts. The ECJ is a symbol of the EU’s legal power, and Brexiters want it gone.

So those are the six things the UK wants. In the Boris Johnson dream scenario, the UK gets all the above and goes home happy.

But the UK can’t have it all. It’ll have to choose. From I can tell, the best it can hope for is three of the six. And there are three different combinations.

The reason for this is, basically, the EU isn’t going to give the UK everything it wants.

The EU is not going to give up free access to the single market unless the UK allows free movement of workers, and the ECJ. If the EU allowed countries to choose that combination, lots of countries would choose it, and the EU would fall apart.

That leaves three compromise packages. I’ve drawn them up on a diagram…

The three circles of Brexit 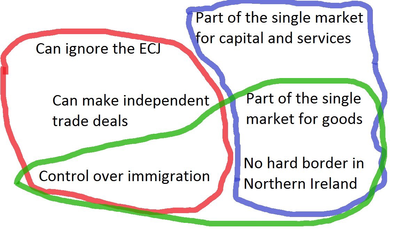 The red circle I’ll call the Nigel Farage position: maximum sovereignty at the cost of the economy and Northern Ireland.

The blue circle is the Vince Cable position: keep the economy going and avoid messing up Northern Ireland, at the cost of less sovereignty and more immigration.

And the green circle is the Kevin O’Rourke position. O’Rourke is an economic historian at Oxford. In this interesting blog post, he makes the case for a compromise position which could offer a bit of both: control over immigration for Farage, continued membership of the single market for Vince Cable, and an invisible border in Northern Ireland for the DUP.

I’m sitting here sniping from the sidelines, which is the easiest job in the world. I wouldn’t trade places with her. Because, as a mere private citizen, I get to benefit from Brexit personally thanks to this Brexit severance cheques scheme.

The idea is that you can make a big, steady income from dividend payments which are being massively juiced by Brexit.

Our best chance to end cancer

The market's 'fear gauge' says it's time to worry

Investing
Author Sean KeyesPosted on 15th February 201612th July 2018
Retailers are taking a beating. But after 20 years of growing, Amazon is now big enough to cause problems for the entire retail industry.

Investing
Author Sean KeyesPosted on 4th November 201612th July 2018
The most exciting investment opportunities are to be found in penny shares. Focusing my flagship newsletter on that part of the market was a...

Investing
Author Sean KeyesPosted on 15th May 201812th July 2018
Subscribers ask how much they should allocate to each stock; or how many stocks they should own; or how to keep down dealing costs...