As the Dow Jones Industrial Average fell over 2,600 points between 2–8 February, 2018 — a decline of over 10% from the all-time high of 26,616 on 25 January, and officially a market ‘correction’ as defined by Wall Street — one question kept repeating in investors’ minds: Where is the ‘Powell Put’?

A bit of explanation may be in order…

The name ‘Powell’ is a reference to Jay Powell, the newly installed Chairman of the Federal Reserve Board. The term ‘put’ comes from options trading. The holder of a put has protection from market declines. When markets are collapsing, put owners can close out stock positions at levels set by the put contract and avoid losses below those levels.

The Powell Put is simply a reference to the fact that Jay Powell and the Fed will bail out stock investors at some level to avoid extreme losses.

Jay Powell was selected by President Donald Trump to be the new Chairman of the Board of Governors of the Federal Reserve. Now that Powell has been confirmed and sworn in, stock markets are looking to Powell for relief from the current turmoil. 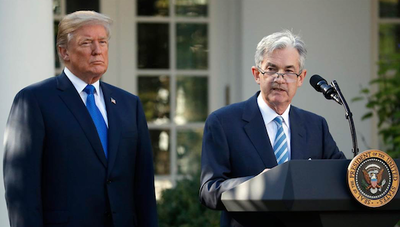 The Powell Put is the latest in a long line of bailouts offered to the stock market by the Fed.

The ‘Greenspan Put’, named after Fed Chairman Alan Greenspan, was exhibited in September and October of 1998, when Greenspan cut interest rates twice in three weeks, including an emergency rate cut not announced at a scheduled FOMC meeting, to control the damage from the collapse of hedge fund Long-Term Capital Management.

The ‘Bernanke Put’, named after Fed Chairman Ben Bernanke, was exhibited on numerous occasions, including the launch of QE2 (quantitative easing) in November 2010, after QE1 had failed to stimulate the economy, and the delay of the taper in September 2013, after the emerging markets meltdown resulting from Bernanke’s ‘taper talk’ in May 2013.

The ‘Yellen Put’, named after Fed Chair Janet Yellen, was also on display many times. Yellen delayed the ‘lift off’ in rate hikes from September to December 2015 in order to calm markets after the Chinese shock devaluation and US market meltdown in August 2015.

The Yellen Put was used again starting in March 2016, when the Fed delayed expected rate hikes until December 2016 to deal with another Chinese devaluation shock, as well as a US market meltdown in January and February 2016.

In short, there is a long history of the Fed cutting rates, printing money, delaying rate hikes, or using forward guidance to calm nervous markets and pump up asset prices.

How the Fed will intervene

Over the past 20 years, the Fed has practiced the mantra of ECB Head Mario Draghi — ‘Whatever it takes’ — as its response to disorderly market declines.

Now that US stock markets have experienced a drawdown as severe as those of August 2015 and January 2016, the need for the Fed to possibly exercise the Powell Put is back on the table.

There can be no doubt that the Powell Put exists. The Fed will not stand idle as markets collapse and the retirement savings of Americans are wiped out.

The Fed’s actions in 2008, in response to Lehman Brothers and AIG, were an extreme example of the ‘whatever it takes’ philosophy of modern central bankers. The idea of free markets finding a level at which markets clear, and rotten banks and bad loans are allowed to fail, is passé.

These continual Fed bailouts will prove to be cancerous in the fullness of time.

By creating asymmetric markets that only go up and are never allowed to fall too far, the Fed is disguising the true risks and encouraging investors to over-allocate to highly risky assets.

The time will come, sooner than later, when the asset bubbles are so large and the resulting collapse so catastrophic that it will exceed the capacity of central bankers to stop the panic.

For now, the Fed put is still relied upon by investors to prop up asset prices.

But at what level? When does the Powell Put come into effect? Answering these questions is critical before investors can decide if it’s safe to go back in the water.

Based on my personal conversations with Ben Bernanke, recent remarks by New York Fed President Bill Dudley, and the actual interventions of the Fed over the past 20 years, we actually have good transparency as to how and when the Powell Put will come into play.

The combination of the two factors — speed and percentage decline — determine when the put is activated.

The key percentage decline is 15%. Bernanke told me in a private conversation that a decline of 15% will trigger a Fed intervention, but anything less than that is not particularly troubling to the Fed.

However, there are two important corollaries to the 15% rule.

The first is that a decline of 10% or more in a few weeks, which appears headed towards 15% because of disorderly conditions, can trigger a precautionary response by the Fed.

This is like slamming the brakes on a car that’s travelling on ice.

The car will not stop; it keeps going for a considerable time. When the Fed sees a 10% decline that shows no sign of stopping, it will treat it as a 15% decline in the making and take some action.

That was the situation Yellen faced in September 2015 when she delayed the lift-off. Markets had fallen 11% in three weeks but showed no signs of stabilising. Yellen treated that situation as tantamount to a 15% decline and took action.

The second corollary is that if a period of calm or even a recovery commences after a decline of 7–10%, the Fed will reset the clock. This means that the original decline has been contained, markets have stabilised on their own, and a new 15% decline from a new level — rather than the previous high — will be the benchmark for Fed intervention.

Right now, markets are on the cusp

Despite the recent bounce back, markets are still down from their all-time high. And you can expect a good amount of volatility going forward.

If markets had continued to fall in a disorderly way after 8 February, Powell would have offered ‘forward guidance’ about delaying the March 2018 rate hike around the level of Dow 22,000.

But if markets stabilise around current levels and hold above Dow 24,000 for the next few weeks, the Fed will declare a reset at that level and raise rates in March as currently planned.

From there, the Dow would have to fall to 20,000 in a matter of a few weeks in late March or early April — a new 15% decline — in order for the Powell Put to apply.

The next few days will tell the tale. If the Dow drops to 22,000 precipitously, the Fed will postpone the March rate hike to rescue markets. If the Dow stabilises at 24,000 or higher, the Fed will raise rates in March. A new Powell Put would be set at Dow 20,000, using 24,000 as a baseline.

All of these put levels are predicated on precipitous, disorderly declines. If markets exhibit a slow, steady decline over months and years, the Fed put will not apply. In that world, the Fed’s response function would depend solely on inflation and job creation; the so-called ‘dual mandate’. Stock investors will be on their own.

Of course, the existence of the Fed put creates a self-fulfilling prophecy.

If investors believe the Fed will bail them out every time the market declines, they will continue to ‘buy the dips’ in anticipation of market rebounds once the Fed does its work. Based on the buying, the market will rally and the put will never have to be used.

This opportunity closes in thirty days

The first possibility is where the market drops 20% in one or two days, as happened in 1987, 1929, 1914, 1907 and 1869, among other occasions. That scenario would happen too quickly for the Fed to respond. A later response might prevent further damage, but not before 20% or more of your portfolio was gone.

The second possibility is the slow, steady decline based on macro fundamentals, where the Fed simply does not care. This happened in the 1970s.

The right response to the market’s next move, and possible Fed impotence or indifference, is to increase allocations to cash and gold as a hedge against stock declines.

What is clear is that volatility has returned with a vengeance, investors have begun to focus on the unsustainable debt bomb in federal finance, and, as a result, the stock market decline is far from over.

There is one sector I believe could thrive thanks to this situation. In fact, it’s been in a quiet bull market for two years now. But it may soon be blown wide open.

Why stocks could still have far to fall

Where to find the hottest startup companies in Japan

Economy
Author Jim RickardsPosted on 7th July 20155th July 2018
Chinese financial assets are spread among hundreds of millions of investors, while Greek sovereign debt is concentrated in a few hands.

Economy
Author Pieter CranenbroekPosted on 3rd February 20175th July 2018
Donald Trump has demonstrated once again that his Gatsby government will put the interests of the few ahead of the many.
Economy
Author Nathan TippingPosted on 9th October 2020
Boris has certainly had a change of heart. Just seven years ago he was shale’s biggest cheerleader, claiming that it would power Britain’s houses...