TikTok Seeks to Distance Itself from Chinese Roots

TikTok, the latest social media app I’m too old and angry to understand, is attempting to distance itself from its Chinese roots, according to a report by the Wall Street Journal.

The video app, which allows you to layer annoying music over whatever annoying thing you’re doing for attention that day, is the first-ever Chinese social media app to have some success in the good old U. S. of A.

However, the company’s sudden rise in popularity has sparked concern from U.S. lawmakers and regulators, who are acutely aware that the Chinese government could request access to TikTok users’ data any time they want.

Following reports that TikTok was censoring U.S. content (like LGBTQ and pro-Hong Kong videos) to keep its overlords in Beijing happy, the U.S. launched a national security review.

“That’s nice. But all it takes is one knock on the door of their parent company, based in China, from a Communist Party official for that data to be transferred to the Chinese government’s hands, whenever they need it.”

As you can imagine, it’s kinda hard to compete with the Valley’s ruthless social media giants when the government is up your ass with a flashlight. And so the company is reportedly considering several tactics to “Americanise” the app and divert attention away from it.

This includes moving its Beijing-based parent company ByteDance Ltd. to Singapore (ain’t nothin’ more American than Singapore) and rebranding as an all-American whatever the hell this app is supposed to be. 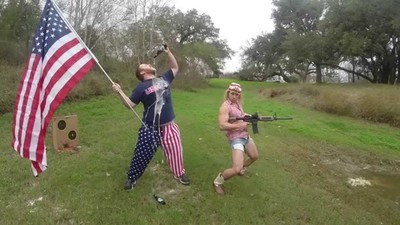 It’s worth noting that U.S. users only make up 4% of TikTok’s total user base (including a Chinese version of the app that operates under a different name).

But the higher-ups at ByteDance Ltd. believe growing the U.S. market is the key to launching a successful IPO next year. (Because, as I’ve said many times before, if it doesn’t happen in America, it doesn’t count.)

ByteDance bought a little known social media app called Music.ly in 2017, rebranded it as TikTok, and started promoting the hell out of it with some of the worst ads I’ve ever seen in my life.

But then again, what do I know?

Since then, more than 100 million American users have downloaded TikTok, so obviously these things are working on some level.

Subsequently, its parent company Bytedance has been valued at $75 billion, making it one of the most valuable startups in the world.

A spokesperson for ByteDance tried to make the case to the WSJ that TikTok is already not-a-Chinese company and please stop investigating us, guys.

“It is well-known that ByteDance was founded in China,” he said. “But the reality is that the TikTok app does not operate in China, and we have been further building out and empowering teams in the markets where it does operate.”

However, a former employee at TikTok’s Los Angeles office refuted the claim saying the company cannot simply shake off its ties to Beijing: “We’re a Chinese company,” he said. “We answer to China.”

The markets closed at record highs Friday, with the Dow Jones Industrial Average breaking for the weekend at an all-time high of 28,000 points. (And according to our sources, it celebrated by getting very drunk and seeing Frozen 2 with its boyfriend, Russell 2000.)

The DJIA tracks 30 of the country’s largest companies. But it was the unlikely duo of Apple and Home Depot that did most of the heavy lifting for the index between the 27k and 28k mark.

Apple removed key features — sorry — “streamlined” its way to an additional 434 points, while Home Depot built a 158-point deck onto the DJIA even though his wife said he couldn’t.

Even poor little Boeing managed to lend a helping hand, adding 86 points during that period.

A sluggish McDonald’s weighed the heaviest on the list, declining almost 127 points as the rest of the Dow rose from 27k and 28k.

Recently, the “Home of the Big Mac” has become the “Home of Slowing Growth” as the company shells out to modernise its restaurants and fake meat alternatives eat into its market share.

The Siege of PolyU

A Hong Kong University where protestors have been holed up for two days has become the staging area for the city’s most violent clash to date.

I know every time there’s an article about Hong Kong, it’s spun as the “most violent clash to date.” But there’s some serious Mad Max stuff going down this time. (And not one of the good Mad Max’s. I’m talking about the Tina Turner one with Master Blaster and the killing dome.)

After a week of prolonged destruction and violence throughout the city, police have laid siege to PolyU where more than 500 pro-democracy protestors have holed up.

Protestors kept police out by barricading the walkways leading to the campus and set them on fire. (Because police hate fire… or am I thinking of Frankenstein?)

The student archery club rained down volleys of arrows on the raptors (which is a sentence I never thought I’d write) while protestors drove back the assault with Molotov cocktails, rocks, and just about anything that makes a “thunk” when it hits a guy.

So far, China’s People’s Liberation Army (you need a snappier name, guys) has remained out of the battle, lest they kick off an international incident.

But Hong Kong has not been shy about suggesting the possibility of bringing in the army and using live ammunition against protestors.

When asked at what point the army would be brought in, China’s ambassador to the UK Liu Xiaoming said: “[The PLA] is already there in Hong Kong garrison to show China’s sovereignty. If the situation becomes uncontrollable, the central government will not sit on its hands and watch. We have enough resolution and power to end the violence and unrest.”

White-collar workers took the day off today to march through the Central Business District and show solidarity with the protestors. (Though they left the arrows and Molotov cocktails at home.)

Despite literal war in the streets, Hong Kong’s benchmark stock index the Hang Seng was up 1.4% at the close of trading: its best day in two weeks.

Welcome to the One Last Thing Kitchen, where we give you handcrafted recipes to ruin family gatherings.

Millions Get This Costly, Unnecessary Procedure Because Doc Tells Them To

According to a new study, millions of Americans might have gotten a big old mesh tube shoved into their arteries who didn’t need it. (I mean, who does?)

The study, released Saturday at the American Heart Association’s annual scientific conference, found that stents and coronary bypass surgery are no more effective at preventing heart attacks and death than better health habits and the standard drug treatment.

Millions of Americans have undergone this costly, invasive, and grossly overprescribed surgery: as many as 800,000 a year.

However, according to this study, there’s no reason to get a stent unless YOU’RE LITERALLY HAVING A HEART ATTACK RIGHT NOW.

I mean, I keep saying “according to this study” but these findings aren’t exactly new.

A study with identical findings was released more than a decade ago at the 2007 American College of Cardiology conference (whose attendees have to be made up of practically the same people who go to the American Heart Association’s conference).

When the 2007 study was released, the president of the American College of Cardiology Steven Nissen seemed optimistic that it would result in some positive changes in the industry.

“It does not relieve risk of heart attack and it is only marginally better at relieving angina, so why should you go on stenting?” said Nissen. “We should reserve it for those that just don’t do well on medical therapy or if they have symptoms that are interfering with lifestyle.”

Yet here we are, 10 years later, shocked and awed at the exact same results and fantasising how this could have a profound impact on how heart patients are cared for.

It’s worth asking ourselves the exact same question Nissen asked all the way back in 2007.

“Why should you go on stenting?”

Hospitals charge between $11,000 and $41,000 to put a stent in ya, depending on the hospital, state, and your insurance company.

Do you think our healthcare system would let 800,000 of these little money makers getaway every year? Not a chance.

They ain’t changing this procedure until there’s something to sub in that they could charge even more for. And you sure as heck can’t charge $40k for telling folks to eat better, take their meds, and have a walk after dinner.

Last year was an eventful one in terms of European elections

Economy
Author Pieter CranenbroekPosted on 10th January 20175th July 2018
An obsession with public debt has led focus away from private debt, which is much more dangerous to a country’s economic health.