Cobalt is one important component of electric batteries. But it’s not the only one. Today my colleagues Louis Basenese, Jonathan Rodriguez and Marin Hutchinson are taking a look at lithium, another obscure metal EV component with a lot of potential.

You know by now I think electric vehicles are coming sooner than most people expect. I wrote last week that your current car might be the last internal combustion powered car you ever buy.

And you know by now that I’ve found a great way to profit from this trend. Electric cars rely on cobalt, and there’s not very much of it around. If EV’s take off like I’m expecting, I think cobalt will go through the roof.

Cobalt is one important component of electric batteries. But it’s not the only one. Today my colleagues Louis Basenese, Jonathan Rodriguez and Marin Hutchinson are taking a look at lithium, another obscure metal EV component with a lot of potential.

Lithium vs. Oil: An Unstoppable Divergence in the
Energy Market

Lithium continues to torch oil in 2017.

The Global X Lithium & Battery Tech ETF (NYSE: LIT) has been hyperbolic all year — up 57% to date.

The divergence between these two key energy commodities is shocking. 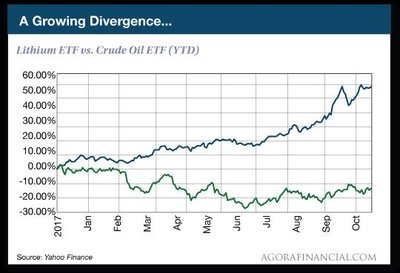 So there are two schools of thought here…

Old School: Divergences among two assets operating in the same sector — in this case energy — never last. So a profit opportunity exists as lithium and oil race back toward equilibrium.

New School: The demand dynamics inherent to lithium are so powerful that they’ve decoupled from every other energy resource. So expect lithium’s divergence with oil to widen even further.

So whose camp are you in?

The answer to that question could put a load of money in your pocket.

Our job is to make sure you’re in the right camp.

When deciding which camp to fall in, it’s important to note that oil and lithium are at entirely different points in their product life cycles.

We have been extracting oil commercially since at least 1859. At this point, we’re close to “Peak Oil” — when production begins to decline because of depleted reserves.

Meanwhile, the world’s lithium reserves are only beginning to be tapped since substantial demand for lithium has only hit recently.

In other words, we’re nowhere near “peak lithium.”

Lithium is the 25th most common element in the Earth’s crust and is also substantially present in seawater, so deposits are plentiful.

True, some deposits are below commercially viable concentrations. But we still have considerably further to go on the “learning curve” of lithium extraction. So even as richer deposits are exhausted, we shouldn’t see a spike in prices.

With that said, demand is increasing rapidly.

And that boost in demand should give prices a boost in the immediate future.

Bottom line: Rapidly increasing demand alone should push lithium prices higher in the short term. But with a plentiful supply — along with decreasing extraction costs in the coming years — lithium should trend downward long term compared with oil. Unless, of course, oil demand collapses because of political pressures.

Change is hard for people — especially when it involves aspects of our daily lives.

The era of the internal-combustion engine in automobiles is coming to a close.

Fortunately for Big Oil, the ancient engine’s end will be slow and painful.

But nevertheless, fueled by rabid climate-conscious consumers (and governments), electric vehicles (EVs) are here to stay.

Not to mention several European countries — including the U.K. and France — have declared gas-powered engines illegal after 2040.
Furthermore, Tesla Inc. (TSLA) isn’t the only player in the EV game anymore.

Nearly every major carmaker in the world has an EV on the market — or is working like hell to get several out.

So the demand for lithium, which aptly powers electric auto engines, will only rise over the next 30 years. At the same time, oil will take a back seat.

Bottom line: Expect the divergence between lithium and oil to widen even further.

We don’t need a crystal ball to accurately pinpoint the next tech megatrend. The evidence is typically hiding in plain sight, whether it’s patent filings, regulatory approvals, talent grabs, a string of well-coordinated and connected acquisitions, rapid advancements in technical capabilities or — as in today’s case — a telltale move in prices of key “building block” commodities…

We can see the growth explosion coming if we’re paying close attention. And we can profit handsomely if we act before the trend becomes obvious to the rest of the world.

In that regard, the time to buy into the lithium mega-trend is now!

This chart says it all: 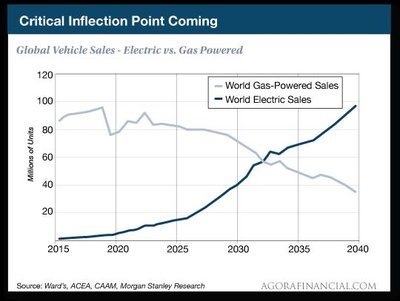 Mind you, that’s Morgan Stanley’s baseline scenario. In their more optimistic projection, which I believe is most likely, we’ll cross the critical 50% threshold within 15 years.

By 2045, gas-powered vehicles will essentially be dinosaurs — accounting for less than 10% of the market.

Here’s the key… The inevitable rise of electric cars represents a permanent shift in the market dynamics for the key transportation commodities of oil and lithium. There will be no return to equilibrium. Lithium promises to rule the future.

As such, investors would be wise to scoop up the LIT ETF right away. It provides exposure to the full life cycle of EVs. From mining to refining to batteries to vehicles. The ETF is affordable, too, with an expense ratio of 0.76%.

Louis Basenese
For Risk and Reward

Why we should worry about the Budget

Economy
Author Shane OrmondPosted on 30th May 2019
Shares of Beyond Meat (BYND) spiked yesterday after the CEO of McDonald’s (MCD) said a whole lot of vague nothing on national television. The...