Is it a drone? Is it a plane? Is it a terrifying flying robot intelligence that delivers toothpaste to your neighbours?

Yes to all of those things! (Maybe.)

“The tech industry is abuzz about drones, but not all drones are created equal,” Wilke said, revealing the device with a theatrical flourish and a dramatic cloud of smoke. (Never has delivering toiletries and protein powder been so sexy.) 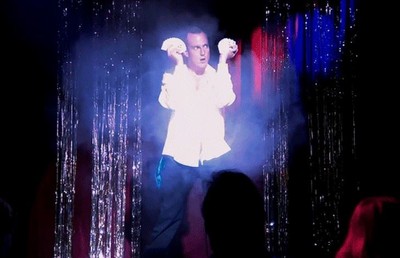 The Prime Air delivery drone is a type of hybrid drone we haven’t seen before.

It takes off like a regular old drone, ascending vertically like a helicopter. But once it’s off the ground and clear of any obstacles, it transforms into a plane and flies vertically. (This is starting to sound a lot like a Michael Bay movie. And not one of the good ones.)

This design was built from the ground up with FAA approval in mind. The drone uses FAA-approved parts where it can. And since it flies like a plane, there’s no need to create a suite of brand-new aerospace regulations for it.

As Wilke told Bloomberg, “We’re not telling the FAA, hey, here is something new that you’ve never seen before,” he said. “We’re saying, this is an airplane that’s built to exacting aerospace standards.” 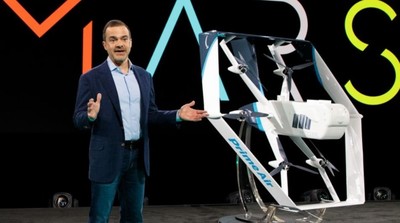 Are you sure this is an airplane, John?

Following the announcement, the FAA issued a short statement, granting Amazon one-year approval to test the Prime Air in limited ways (not including actual deliveries).

And yet, Amazon seems confident it will start delivering to customers in a matter of months.

“Our objective is to have a certified commercial program that will allow us to deliver to customers,” said Wilkes. “And that’s what we’re working towards in the coming months.”

In order to secure its “special airworthiness certificate,” Amazon must have been doing some serious wheeling with the FAA behind closed doors.

Still, I wouldn’t hold my breath.

The Jeff Bezos Everything Machine might like to think of its drone as an airplane. But with all its robotic and automated features, the FAA will still have to come up with entirely new regulations to govern its flight.

The No. 1 Reason to Try Weed

Adults want to smoke weed. But not for the reason you think.

(OK, some want to do it for the reason that you think. But most folks have a better reason.)

According to a recent survey by market-research firm Nielsen, one in three U.S. adults are interested in trying legalised weed. But the vast majority aren’t looking to just veg out on the couch and watch Spongebob.

The No. 1 reason folks cited for wanting to make a feel-good salad with the devil’s lettuce was pain management.

Other top justifications to try the-only-reason-Taco-Bell-is-still-in-business included as a sleep aid (77%), general relaxation (74%), and treatment of a non-pain medical condition (63%).

Having a good time with friends and family (which is economy-wonk speak for getting high) was all the way down at 48%.

Of course, none of these options are my No. 1 reason to try weed.

I want to “try weed” because legal marijuana is the fastest growing industry in the country.

According to data and analytics firm New Frontier Data, the legal cannabis market will grow from about $8.3 billion in 2017 to nearly $25 billion in 2025.

We all know that. She’s said it dozens of times. But if you think that’s because she’s got a soft spot for old Donald then you’ve got another thing coming. (And that thing is the biggest criminal trial since O.J.)

According to a report by Politico, Nancy met with House Judiciary Chairman Jerry Nadler and several top Democrats on Tuesday evening to discuss whether or not to launch impeachment proceedings.

Nadler (who loves the idea of impeaching Trump more than he loves his own wife) pressed Pelosi to give her blessing to start an impeachment inquiry.

(Technically, Nadler doesn’t need Nancy’s permission. But as House speaker, its common courtesy to run items like IMPEACHING THE PRESIDENT past her as a common courtesy.)

Nancy said she sympathised with the pro-impeachment Dems (known from here on out as the impeachies), but she warned Nadler that the party lacked the public support and bipartisan backing necessary to impeach.

And according to Politico’s sources familiar with the meeting, she had a better idea anyway.

So it seems, rather than go through the messy and disruptive process of impeachment, Pelosi would prefer to unseat Trump in the 2020 election and then try him in the criminal courts.

If Nadler was moved by Pelosi’s argument he did a bad job of showing it, heading straight to CNN where he told them, “We are investigating all of the things we would investigate, frankly, in an impeachment inquiry.”

Meanwhile, at that exact moment, Pelosi was telling reporters that all the Democrats were on the same page. (Or should I say path.)

“Make no mistake,” Pelosi said, pounding the podium. “We know exactly what path we’re on. We know exactly what actions we need to take. And while that may take more time than some people want it to take, I respect their impatience. It’s a beautiful thing and it’s important to our country.

“We’re following the facts, we’ll take them where they lead us. As we go down that path, we will be as strong as we can be. There is no controversy or ‘try this, try that.’ We are on a path.” (Meanwhile, I’m on the path of not be able to understand this purposefully vague gibberish.)

Dems Dig in for Another Showdown

You know what they say?

While the cats away, the mice release a new funding bill for Homeland security with no funds for the border wall.

OK. Nobody says that. But it just happened.

While Trump meets with Europe’s leaders, House Democrats gave the administration the finger with a 2020 funding bill with zero allocations for Trump’s wall.

House Appropriations Committee Chairwoman Nita Lowey said the lack of funding in the bill was to protect the nation’s values.

“This includes upholding the rights and dignity of migrants, protecting against attempts by the Trump administration to steal funds from measures that actually keep us safe for a vanity border wall, and providing no funding for additional Border Patrol agents and checkpoints or border barriers,” said Lowey.

But the Dems 2020 spending bills contain multiple provisions that would block any future attempts to reallocate funds in this way.

And you know what that means:

Trump has a lot to deal with when he gets back from Europe. But you can bet this will be at the top of his list.

We’ll have more on this as the story develops.

What to make of Woodford’s woes

Economy
Author Kit WinderPosted on 19th April 202119th April 2021
Everyone is banking on vaccines marking the end of this abominable pandemic. Let’s hope that’s true. There is a subtle debate in play here,...

Economy
Author Shane OrmondPosted on 26th June 201927th June 2019
And then there were 11. Governor J.B. Pritzker signed legislation yesterday approving the use of recreational marijuana in the U.S. state of Illinois. (Ed...