Shares of Beyond Meat (BYND) spiked yesterday after the CEO of McDonald’s (MCD) said a whole lot of vague nothing on national television.

The makers of the veggie burger that bleeds closed out the day at a gain of 13.3%. And the stock continued to rise when the markets opened this morning, popping another 7% before I’d even had my second cup coffee (which is how writers with broken souls measure time).

The sudden spike seems to have been triggered by an offhand remark made by McDonald’s CEO Steve Easterbrook (who, I was disappointed to learn, is not a real clown) on CNBC yesterday.

CNBC’s reporter asked Easterbrook if McDonald’s would ever consider adding a plant-based burger to its menu, specifically citing Beyond Meat as an example.

“Absolutely no idea at this stage,” said Easterbrook. “Clearly, anyone who has something they want to get scale to will often look to McDonald’s to be that partner – to help them scale.

“We’ll stay close to consumer demand; I certainly know our teams there are paying close attention and discussing this among each other, and with some of the options that are out there. So maybe more to come, but nothing much to say about [it] in the moment.”

It’s hardly an earth-shattering revelation that McDonald’s is looking into vegan meat and would add it to the menu if the demand was there. But apparently, it was more than enough to convince investors.

The burger from the yellow-pea protein lagoon racked up a blockbuster first month on the stock market, banking gains of 58% since its IPO.

Just this Tuesday, Beyond’s stock popped 7% when it announced it would be opening one of its Frankenburger facilities in Europe.

Much of that goodwill might be simply because Beyond got its ass to IPO before its biggest competitor, Impossible Foods. But even if Beyond isn’t the king of burgers that aren’t really burgers, it is in a solid position to profit from a rapidly growing industry.

According to analyst Ken Goldman’s future vision, the total market for plant-based meat will be worth $100 billion in 15 years, with Beyond Meat mopping up a 5% share.

If Goldman’s estimates are accurate (we could all be dead tomorrow, for all I know), Beyond’s sales would exceed $5 billion, compared with $88 million last year.

A few years ago, I’d never heard of CBD.

According to some dodgy CBD websites, the Chinese Emperor Shennong was drinking cannabis-infused tea — which would have had CBD in it — way back in 2737 BC.

Shennong was ahead of his time (and probably a very chill dude). But it’s only been in the last decade that the scientific community has become aware of the drug’s potential for broad medical applications.

Cultivate Better Drugs: Cannabidiol, better known as CBD, is a non-intoxicating component of the marijuana and hemp plants. Some promising research and testimonies suggest the drug is an effective, safe, and non-addictive treatment for pain, anxiety, and insomnia.

Since then, everybody and their dogs have started selling CBD. You’ll find it in oils, salves, face masks, gummy bears, bath bombs, and even beard oil. (Next up: CBD-infused car seats.) 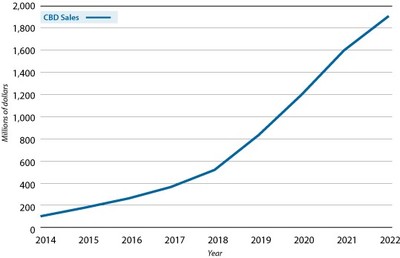 Some of that momentum is owed directly from the shift in public perception and legality of marijuana and hemp. But the fact that CBD on its own doesn’t get you high gives it a distinct advantage over the devil’s lettuce.

In an interview with NPR, New Frontier Data Chief Knowledge Officer and obnoxious titleholder John Kagia said that while“federal policy may be slow to move around marijuana, the clear kind of interest in advancing a national CBD policy means that there’s an opportunity here for the U.S. to be a participant in this emerging global market.

“The CBD market has clearly grown dramatically over the past 12 months. But we think this is still just the tip of a very large iceberg.”

Lured in by promising early data (and $$$), researchers are stepping up their research efforts for CBD. Funding for CBD studies went from zero in 2014 to an estimated $16 million in 2018.

Today, trials are underway on the effects of the drug on anxiety, pain, opioid addiction, depression, and every other illness under the sun.

Trump Tells Roy Moore to Sit This One Out

President Trump took aim at Former Chief Justice and rootin’ tootin’ cowboy cosplayer Roy Moore today, warning that there would be “devastating consequences” if Moore runs for Senate in Alabama.

“Republicans cannot allow themselves to again lose the Senate seat in the Great State of Alabama,” the President tweeted. “This time it will be for Six Years, not just Two.”

Moore (who, like hoverboards, is banned from most malls) ran for Senate in 2017 after the seat was vacated by Jeff Sessions when he was appointed attorney general. (Sessions has since fallen through a crack in DOJ’s floorboards and no one has seen him since.)

Moore’s candidacy was plagued by allegations of inappropriate sexual interactions with young girls. And despite the full support of the president and a nail-bitingly close race, Moore lost to Democrat Doug Jones. (The civil rights lawyer. Not the guy with bendy arms who dresses up as monsters.) 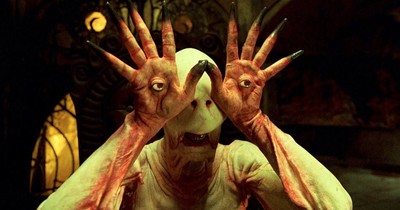 [NOTE TO GRAPHICS DEPARTMENT: Please double check the image is of the right Doug Jones before sending.]

In a deep-red state like Alabama, Moore’s loss to a Democrat was considered a major upset and an embarrassment to President Trump who supported and campaigned for him.

Still, the president says he has “NOTHING against Roy Moore” (seems like a cool dude to not go to the mall with) but the guy’s reputation is poison to an election.

“If Alabama does not elect a Republican to the Senate in 2020, many of the incredible gains that we have made during my Presidency may be lost, including our Pro-Life victories,” tweeted the Commander in Chief. “Roy Moore cannot win, and the consequences will be devastating….Judges and Supreme Court Justices!”

China Abducts Students for Being Communists

Authorities have started cracking down members of student communist parties, torturing them, and making them disappear.

To date, 21 members of Peking University’s Marxist society have been arrested for being communists placed under house arrest or have vanished altogether.

Their crime? Advocating for the rights of disenfranchised workers against the state. (You know? That thing communism is supposed to be about.)

The situation has gotten so dire, students have started recording farewell messages to their loved ones on their phones in case they are taken.

In one of these videos, 21-year-old Qiu Zhanxuan describes being interrogated and humiliated for days at the hands of Beijing police.

The battered-looking Qiu says the authorities slapped him until blood streamed from his nose and forced him to listen to hours of propaganda on full volume.

Finally, they bent him over a table, spread his buttocks, and joked that they would teach him how to insert a listening device.

“This all happened on campus,” Qiu Zhanxuan said in the video. “If I disappear. It’ll be because of them.”

Qiu disappeared again over a month ago. He hasn’t been seen since.

We’ll have more on what this means for China and the world at large in tomorrow’s edition of One Last Thing.

Economy
Author Kit WinderPosted on 16th November 2020
He wore his Sunday best. It was Sunday, at the Masters. In Augusta, Georgia, little appeared normal. There were no patrons lining each hole,...

Economy
Author Kit WinderPosted on 23rd March 202023rd March 2020
Have you ever wondered why in financial markets, red is down and green is up? It’s ubiquitous, right? I’m thinking traffic lights, on/off lights...