Many people may have heard the word genomics in passing, but did you know it is one of the most important topics for the human race?

Many people may have heard the word genomics in passing, but what does it actually mean, and why is it one of the most important topics for the human race?

But here is something that is even more puzzling…

If a salamander loses a toe, or for that matter its tail, jaw, heart muscles or even the tissue of its central nervous system it is able to regrow them.

This begs the question – if a simple salamander can do it, why can we not?

One way of finding out would be to examine the software of life and discover some coding that the salamander possesses but you and I lack.

The next step would see that missing code written into the human software to see whether the human assumed the capabilities of the salamander.

Perhaps you think this is fantastical and absurd. But if you understand that exactly this sort of thing is going on all over the world, you are well on your way to grasping a revolution that I, uniquely, have been describing to investors in my Breakthrough Biotech Alert newsletter since 2012.

The ‘software of life’

When I say this, I mean the genome – that string of three billion pairs of chemical bases (nucleotides) – adenine, guanine, cytosine, and thymine.

This is scrunched up in the nucleus of every cell in your body, of which there are an estimated 37.2 trillion.

If you think of the genome as a book with three billion pairs of letters then most of it is just gobbledegook…but every now and then you come across a few lines or paragraphs that make some sense.

These coherent stretches are the genes and their letters spell out instructions that are transmitted, via RNA, into the outer reaches of the cell which then goes about making the various proteins that determine its function. Depending upon which of these genes is ‘expressed’ (i.e. actioned) the cell may function as a blood cell, a brain cell, a liver cell etc. And if the DNA becomes corrupted then the cell might turn cancerous.

So the first step in the understanding of life is to read (or ‘sequence’ as they say in the trade) the genome.

I must say, even after writing about this subject for six years I am still amazed that it’s possible to extract something as tiny as the nucleus of a cell, get hold of this great long ribbon of DNA and then decipher every letter. But while it took a ten year global collaboration and three billion dollars to sequence the first human genome, this feat can now be accomplished in a matter of hours and for a few thousand dollars.

According to the leading provider of gene sequencing machines, the cost of sequencing has been reduced by more than a factor of 10,000 since 2007, while the time taken has dropped by a factor of 3,500.

As the following chart – a staple of any industry presentation – shows, the cost per human genome is closing in on the long held target of $100 and the latest generation of machines could get it there: 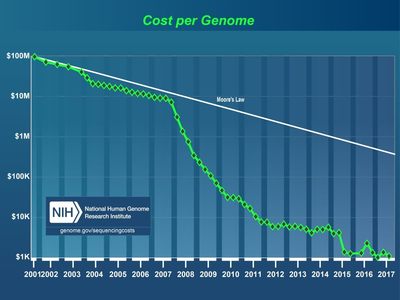 As a result of the increased affordability and pace, researchers around the world are sequencing genomes like crazy.

Here at home for example, Genomics England is sequencing 100,000 human genomes, whereas Iceland want to sequence the genomes of its entire population of 332,000.

As for the big boys, numerous large scale projects are under way in the USA, whilst the National Health and Medicine Big Data Centre in Nanjing – the capital of China’s Jiangsu province – intends to sequence the genes of one million of its residents.

Complete genomes have also been sequenced in the both the animal and plant kingdoms. The puffer fish, pigeon, mosquito, sugar beet, tomatoes and bananas are just a few subjects that appear on the long and rapidly increasing list of plant and animal genomes. Researchers are even deciphering the genomes of bacteria and the billions of microbes that inhabit the human gut.

How can it benefit us?

It is all very well to be able to read this book of life, but how can we use it to make life better?

Well first we can determine the relationship between genes and the phenotype (the scientific word for an organism’s observable characteristics). By trawling through DNA we might be able to find a gene possessed by everybody with red hair but not by anybody else. We can then reasonably conclude that this is the gene that ‘codes’ for red hair.

Next, we can run experiments to test our theories. Let me give you the example of the Cavendish, a type of sweet banana that is especially popular for human consumption…

Panama Disease – caused by a soil fungus – has been wiping out swathes of Cavendish banana plantations. But the Cavendish is one of hundreds of banana varieties around the world, with many wild-growing bananas immune to Panama Disease that have a gene that confers resistance.

Scientists have identified this gene and now they have edited it into the genome of the Cavendish banana. Hey presto, these genetically engineered Cavendish bananas are now resistant to Panama Disease.

I talk of editing the banana genome as if it is as simple as cutting and pasting a bit of text into this article. It isn’t.But, along with the advance in gene sequencing there has also been a dramatic improvement in our ability to alter the genome.

For years this depended upon the same ability of viruses to get inside our cells that gives us flu. These viruses can be disarmed and altered to deliver new DNA which is then taken up by the cell.

There have also been two other systems, ZFN (Zinc Finger Nucleases) and TALEN (Transcription Activator-Like Effector Nuclease) that cut the DNA ribbon at a prescribed point and rely upon the self-repair mechanisms of the cell to incorporate new DNA bases.

These processes have been around for many years but are variously inefficient, cumbersome, expensive or unreliable, altering genes in unintended ways.

However, the field has been transformed by the 2012 discovery of CRISPR (Clustered Regularly Interspaced Short Palindromic Repeats).

It is rather complicated so I won’t attempt to explain it here. But the point is that it allows researchers to edit DNA, altering the all-important sequence of nucleotides, much more easily, much faster and at a fraction of the cost of the previous methods. Suddenly researchers have been able to chop and change genes to their heart’s content, just to see what happens.

For example, we can take cancer cells, alter their DNA in the laboratory and see if they remain cancerous. We can engineer a new stretch of DNA into a tomato and see if it stays fresh for longer. We can alter the genes of mosquitoes so that they become resistant to the malarial parasite that they pass on to humans.

While doctors have prescribed therapies that – with respect to the profession – are often little more than guesswork on the basis of observed symptoms; genetics allows us to really get to the root cause and to spot impending problems, like cancer, long before they otherwise show up.

With gene sequencing, editing and synthetic biology (which allows us to create DNA in the laboratory) we have all the tools to alter life forms. This could include altering existing species to make them more like those that are extinct – engineering an elephant so that it becomes a woolly mammoth for example.

All of which brings me back to the remarkable salamander…

Scientists at the Karolinska Institute have just sequenced the genome of the salamander – which is six times larger than the human genome – in search of those genes that give the instructions to rebuild missing organs.

While the regrowth of tails and newt-like feet is not of much use to humans, salamanders are able to recreate all the cells that die in Parkinson’s disease in the space of four weeks.

Now that would be useful!

For over 20 years, Tom worked as a fund manager in the City of London and in Hong Kong. During his time as a director with Schroder Investment Management International he was responsible for £2 billion of foreign clients' money, and launched what became Argentina's largest mutual fund. Tom now works from his home in Oxfordshire, where he researches and writes for his premium newsletter, Breakthrough Biotech Alert.
Previous post

Is ripple the new bitcoin?

Being best is still better than being first

Biotech
Author Tom BulfordPosted on 13th April 20185th July 2018
'What you see in your mind's eye is a picture of a mouse with an ear on it. That's the media version of GM...

Biotech
Author Tom BulfordPosted on 6th September 20165th July 2018
The drug industry has traditionally staged large scale trials on diseases that are well established. But killer viruses can spring up at any moment.