The New Year is now underway, but the stock market is behaving just as before.

The New Year is now underway, but the stock market is behaving just as before.

Investors don’t appear to care that valuations are high – in particular in the US – versus history. Or that higher 2017 Q4 profit expectations are already ‘in the price’.

The prevailing attitude seems to be ‘don’t worry about the details’. The market’s going up simply because it’s going up.

But let’s pause for a moment. Because new data has just emerged that’s a very concerning sign for the global economy – and hence equity markets…

Will there now be a market ‘melt up’?

The S&P 500 index – the world’s most-watched share barometer – is fast approaching 400 days without a 5% correction. The all-time record, by the way, is 409 consecutive days without one – this was set on 3 August 1959. Indeed, Goldman Sachs has just told clients that the global risk appetite for stocks has just hit another all-time high.

The current US equity rally “feels like the late phase of a bull market in which investors are capitulating on their reluctance and joining the party because they cannot identify any downward catalysts,” Matthew Litfin, portfolio manager at Columbia Thread needle Investments tells Bloomberg.
In other words, it’s last-minute buyers who are driving prices higher. And there may be further to go, warns Jeremy Grantham, GMO’s chief investment strategist. Grantham was wary of equity index levels in 2000 and has long been known for his bearish views. But now he says that stocks could move much higher.

Sure, Grantham has just told his investors that current prices are amongst the highest-ever. But “as an historian of the great equity bubbles, I recognise that we are currently showing signs of entering the blow-off or ‘melt-up’ phase of this very long bull market,” he says, explaining that this could mean a final surge in shares.

When previous bears become bulls, I become more convinced that a market drop is imminent. But if that further rally does take place, what happens then?

The extended bullish run in stocks has been largely driven by loose monetary policy by central banks. That’s another way of saying that the world’s financial bosses have cut interest rates to the bone while printing as much new cash as they could.

But there’s a flipside to this mega monetary experiment.

It’s called debt. Not just ordinary debt. Oodles of it. And growing fast, too.
Low rates have made it much easier for creditors to borrow. Expectations of falling rates have encouraged lenders to extend further credit. Governments have been to the forefront in tapping investors’ cash. And central banks’ quantitative easing – turning debt into money – has increased borrowing levels even further.

The Institute of International Finance (IIF), along with its mates at the BIS (Bank of International Settlements) and data provider Haver Analytics has been crunching the numbers for several years. And it’s a very scary picture.
Here’s a snapshot of the trend over the last 15 years: 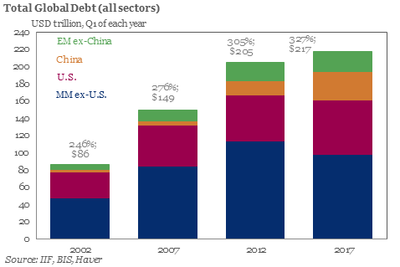 Move forward five years to just before the Great Financial Panic and global debt had risen 73% to $149 trillion, an even more massive 276% of world economic output.

While the debt/GDP ratio has since dipped to only (!) 318%, largely due to the ongoing Chinese shadow banking crackdown that has curbed debt growth, this still suggests that the world’s debt per person has ratcheted up to more than $30,000.

Not exactly a comforting thought.

And nor is the borrowing breakdown, as the next graphic shows. 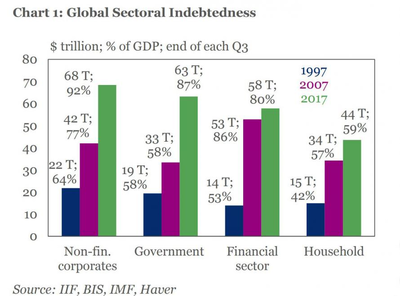 Again, the percentages shown indicate debt/GDP levels for the constituent parts of the global debt/GDP ratios in 1997, 2007 and last year. Every sector is guilty of growing both its absolute indebtedness and also its proportion of economic output.

This brings us back to those global debt/GDP ratios. Though there’s been a recent modest decline here, it may well prove to be temporary. If we’re near the peak of the economic cycle, slowing growth and ever-rising borrowing may soon drive the ratios higher once again to fresh all-time record levels.
The circle is clear. Lower interest rates/more debt have – for the moment – lifted economic growth and driven up global stock prices. Yet there must be a limit as to how much further both borrowing levels and debt/GDP ratios can rise.

In other words, the present situation is unsustainable. The world’s debt to itself cannot keep climbing. It has to be simply a matter of time before global credit growth grinds to a halt. In turn, this will crush economic expansion – and stock prices will be shattered as well.

Which is why, if you haven’t already, I would recommend reading former financial threat-analyst for the Pentagon, Jim Rickards’, latest book – The Road to Ruin. Inside, Jim highlights practical ways you can protect your wealth against a financial crash. If you’re interested, you can find out how to claim a free copy here.

To finish, higher inflation is likely to result in slightly higher interest rates. But the debt pile could prevent central banks raising rates as much as they’d like due to concerns about the debt servicing ability of both highly-indebted firms and also governments.

2018 The year of living dangerously

Has Jim Rickards changed his mind on Bitcoin?

Economy
Author Sean KeyesPosted on 22nd October 20155th July 2018
China's economy is hitting the skids. Boiled down to its simplest terms, the problem is that China’s money supply is too small and that's...

Economy
Author Pieter CranenbroekPosted on 23rd March 20175th July 2018
Is it still 'saving' if you're losing money at the bank? Negative interest rates are currently the 'privilege' of the wealthy, but for how...