Walmart is suing Tesla in connection with several roof fires, which Walmart alleges were started by Tesla’s garbage solar panels.

In total, seven Walmart roofs caught on fire in California, Maryland, Ohio (which is too many roofs catching on fire, if you ask me).

“To state the obvious,” said Walmart in the kind of bitchy complaint it filed. “Properly designed, installed, inspected, and maintained solar systems do not spontaneously combust, and the occurrence of multiple fires involving Tesla’s solar systems is but one unmistakable sign of negligence by Tesla.”

Walmart’s catty lawyers went on to take a swipe at Tesla’s purchase of SolarCity from “Musk’s cousins” and failure to correct the companies “chaotic” practices. (Chaotic practices like spontaneous combustion, explosions, and a tendency to catch on fire a bit.)

“On information and belief, when Tesla purchased SolarCity to bail out the flailing company (whose executives included two of Tesla CEO Elon Musk’s first cousins), Tesla failed to correct SolarCity’s chaotic installation practices or to adopt adequate maintenance protocols, which would have been particularly important in light of the improper installation practices.”

Tesla snapped up SolarCity for $2.6 billion a couple of years ago. The company was founded and run by two of Elon’s cousins and Musk himself was the chairman and biggest shareholder in the company at the time.

If that all sounds a little shady to you, congratulations, your common sense is in full working order. A group of Tesla’s shareholders is suing Tesla over the acquisition but the case won’t go to trial until March of next year.

Shares of Tesla (TSLA) sank in the morning trade, dropping more than 2.4% by the time of writing. After failing to meet expectations reporting big losses in Q1 and Q2 of 2019, Tesla’s stock has dropped more than 32%, year to date.

Stocks of Canadian marijuana giant Tilray rose 3% this morning as the company inked a deal to deliver $3.3 million of medical cannabis to a German supplier.

(Mental note: Pitch kids cartoon to Netflix about a “marijuana giant.” Auction off the naming rights of the giant to world’s top marijuana producers. $$$$.)

The massive shipment of medical-grade weed is headed to a privately owned marijuana supplier that serves more than 2,500 pharmacies across Germany. (And judging by the economic outlook coming out of Das Land der Dichter und Denker right now, they’re going to need all the weed they can get.)

This will be the first delivery to an EU country from Tilray’s recently opened marijuana facility in Portugal. But to the marijuana company’s chief executive Brendan Kennedy, this deal is a stepping stone to the rest of the EU.

“It doesn’t make sense, to you know, for a patient in Germany and France to have access to medical cannabis and a patient in Spain not to have access,” Kennedy told MarketWatch in a phone interview, not really understanding that the EU is made up of separate countries with their own laws. “And so you’ll start to see modularity across all the member states.”

Corporate buzzwords aside, Kennedy told MW he expects 14 additional EU countries to legalise medical cannabis in the foreseeable future, with France likely to get the joint rolling in the next six to 12 months.

Kennedy might be overestimating the “modularity” (whatever that’s supposed to mean) of the EU’s members. But when other countries do start to legalise, the Tilray exec says the framework established for supplying weed to Germany could be replicated all across Europe.

Regardless, getting their foot in the door in Germany is a big win for Tilray. The company now has access to a country with a GDP and population twice the size of Canada.

Kennedy told MW that the revenue from the Germany deal might be reflected in Q3 reporting but would likely be pushed to Q4. Tilray’s stock rose more than 3% after this morning’s announcement, though the company’s stock has fallen nearly 60% since the start of the year.

Hopefully, this European vacation will be enough to keep old Tilray on its feet.

President Trump said yesterday that outlook for the economy remains strong but he’s considering stimulus measures to give it an extra boost (j-u-u-u-u-ust in case).

Ahead of a meeting with Romanian President Klaus Iohannis, Trump told reporters that the White House is considering a payroll tax cut.

“Payroll tax is something that we think about, and a lot of people would like to see that,” said the President. “We’re looking at various tax reductions. But I’m looking at that all the time anyway.”

The president’s comments come just a day after some poor White House spokesperson told reporters the administration was definitely not considering a payroll tax cut. (We need to get this guy on the internal memo system or something.)

Payroll taxes are exactly what they sound like: taxes deducted from your wage packet every month (to finance Social Security and Medicare and other fun stuff).

By cutting payroll taxes, you put more money in the consumer’s pocket (for Xboxes and tacos), which is an effective way to boost a sluggish economy.

However, critics point out that a payroll tax cut would add to the already record-breaking deficit and potentially damage the safety net programs funded by them.

The president also floated the possibility of a capital gains tax reduction, which would benefit wealthy investors.

It sounds like President Trump is planning to push this cut through with an executive order, which would definitely be contested by the Dems in court. 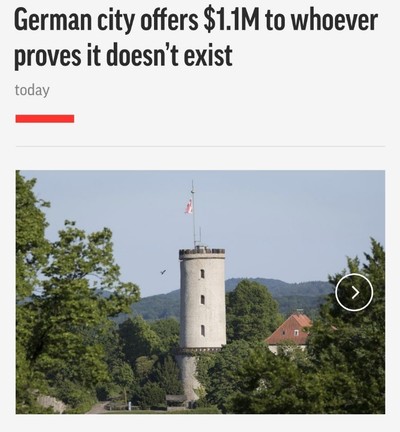 Just two days after Germany’s central bank rang the warning bells for a recession, the country sold 30-year debt at a negative yield for the first time.

This means that investors buying Germany’s debt will get back less money in 30 years than they paid for them today (if they actually hold onto the bonds until maturity).

Why would anyone “invest” in a money-losing scheme like this?

Well, anxiety over a global economic slowdown and a certain trade war has investors scrambling for safe assets. Investors are hoping that yields will continue to fall and raise the value of the bonds, which can then be sold on at a higher price.

Basically, investors are banking that the capital gains from selling the bond will more than makeup for the loss they’ve committed to.

Including Germany’s desperation bonds, there are now $16 trillion of negative-yielding bonds outstanding worldwide, mostly from European governments. The vast majority of these (about 80%) weren’t issued with a negative yield but have since dropped below 0% in secondary trading.

No one really knows where this might lead (since we haven’t seen this before). But things could get bumpy from here on out.

America Has a Virus

Technology
Author Shane OrmondPosted on 30th August 20195th September 2019
Websites have been secretly hacking iPhones for years, according to an investigation carried out by Google in early 2019. (Oh mercy me, thank the...

Technology
Author Pieter CranenbroekPosted on 21st November 201822nd November 2018
Last year bitcoin was presented as a financial cure-all. New money. Digital gold. A hedge. Now we know it's none of these things.

Technology
Author Sean KeyesPosted on 29th January 20191st February 2019
When you don’t have money, it’s tough to get it. And when you do have it, it piles up. Every other week the rich...