For British investors, the problem with Japan is that it’s no fun investing in things you only vaguely understand.

For British investors, the problem with Japan is that it’s no fun investing in things you only vaguely understand.

Investing isn’t just about making money. It’s about making sense of the world. Figuring out what’s going on. And using your knowledge to grab control of the situation.

Making money comes after all that other good stuff.

And Japan is hard to figure out…

Add to this the fact that there just aren’t many Japan experts around.

So when I come along and say you should, say, buy a random Japanese turbine company, I can see why you might not bother reading past the first few paragraphs.

Neither option is much fun…

You see, the Japanese market is glowing hot, and I think you should get involved.

That’s why I’m going to do the work for you. I’m going to Japan, where I’ll be based for a month. I’ll show you what’s driving the boom over there. I’ll show you how to invest, all without going through the hassle of changing broker. I’ll meet with local experts. And, in The Penny Share Letter, I’ll recommend the most exciting Japanese small caps to buy right now.

Tiger, in a coma

Japan’s economy roared back after the Second World War. In 1945 it was around a third as rich as the USA on a per capita basis; by 1990 it had passed the USA out.

Recessions are normal. What’s not normal is for a recession to drag on, and on, and on. Japan basically never got its mojo back after the 1990-91 recession.

Economists scratched their heads. This wasn’t in any of the textbooks. And the Japanese came to accept their lot. Somewhat like Britain after the Second World War, they were resigned to decline.

The Japanese government tried its best. In an effort to kickstart the economy Keynesian-style, it covered half the country in concrete. The government racked up huge debts in the process; more than twice Japan’s GDP. Then it half-heartedly tried printing money. Nothing worked.

The second two ideas proved difficult politically, so he didn’t do much of those. What he did do was appoint a new central bank governor, Haruhiko Kuroda, who was keen as mustard on printing money.

The first is that he and the Bank of Japan Board of Governors decided to start printing an intimidatingly large amount of money every month. The BoJ announced it would print Y80trn per year; which is more than twice as big as the US and UK money printing programmes, proportional to the size of Japan’s economy.

Here’s how Kuroda put it: “I trust that many of you are familiar with the story of Peter Pan, in which it says, ‘The moment you doubt whether you can fly, you cease forever to be able to do it.’ Yes, what we need is a positive attitude and conviction.”

Money printing in a depressed economy

“Since when has printing money ever solved anything?”

Answering that question properly is a couple of thousand words in itself, so if you don’t mind I’ll skip to the end. Instead of showing how Japan’s money printing programme worked, I’ll show you that it worked.

Exhibit A: More people are working. The chart shows the percentage of Japan’s prime-age workforce which is working. 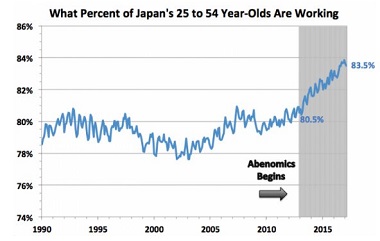 Exhibit B: Wages are rising too. Basic wages are growing at the fastest rate in 20 years.

Exhibit C: Companies are making more money. This chart shows profits as a percentage of sales. 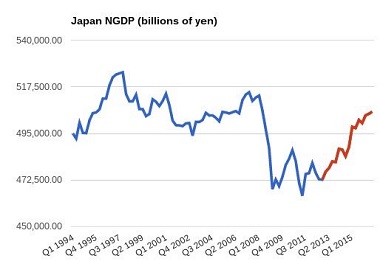 Exhibit E: Japanese stocks are taking off. The chart shows the MOTHERS index, which is Japan’s version of Aim. It’s up 34% over the last year.

Hopefully I’ve convinced you that something real is happening over in Japan.

BoJ Governor Kuroda and Prime Minister Abe have woken Japan from its coma. There’s a new energy over there. And there’s money to be made.

Over the next few weeks I’ll be digging more deeply into the story. I’ll learn more about the best opportunities over there. And I’ll show you how to get involved.

Silver: Once and Future Money

Economy
Author Pieter CranenbroekPosted on 7th August 2018
We all suspect politicians and bankers to be in cahoots together. I asked financial author Nomi Prins if those suspicions were true.

Economy
Author Jim RickardsPosted on 25th April 2019
Trump has already exerted more influence over one institution than any other president in over 100 years — the Federal Reserve. That’s because Trump...

Economy
Author Pieter CranenbroekPosted on 12th June 20175th July 2018
Theresa May will have to get used to working across party lines if she wants to make this term as Prime Minister work.