The UK itself has just been voted the most hated stock market around. And history shows that such a degree of dislike is often a buying opportunity.

After the pain, the gain…

Following its recent sell-off, the S&P 500 index – which drives equity prices around the world, including London – rebounded at the start of this week.

Meanwhile, the UK itself has just been voted the most hated stock market around. And history shows that such a degree of dislike is often a buying opportunity.

So has the correction now happened – meaning that it’s now time to get back in?

That’s your call. But it’s a big risk. The rally has since stalled, with prices now falling again. And most of the dangers still look on the downside…

On Monday the S&P 500 rallied 2.7%. That followed a 7% drop over the previous two weeks as US President Trump’s imposition of tariffs on US steel and aluminium imports hit global stock values.

London bounced back as well.

Some say that the bad news on protectionism is now factored into the market.

And here in the UK, there’s another reason for being more bullish.

Since 1999, Bank of America Merrill Lynch has conducted a survey of global fund managers to find out their favourite – and also their least-liked – investment areas.

Last month’s measure showed that the former category contains banks, emerging markets and cash. In contrast, healthcare and bonds are out of favour. And ‘top of the unpops’ is the UK equity market. Indeed, London is more disliked than it’s ever been in the survey’s history.

Here I recently spotlighted a few good – and also less-good – things about the British economy. And other areas for concern include the apparent lack of growth in productivity (how much is produced compared with the cost of doing so) as well as sluggish business investment performance.

But it could be that “many forecasters are throwing in the towel on productivity just as things are beginning to turn“, says Paul Hollingsworth at Capital Economics.

In 2017’s second half, productivity saw its best two consecutive quarters since the financial crisis. Sure, that could be a reflection of more hours being worked than the start of a sustained upturn. But unemployment has now dropped to its lowest point since 1975 while investment growth has picked up more recently. “We may be about to see that investment bear fruit over the next few years“, says Hollingsworth.

And another message is very clear. The consensus is normally wrong. If it hates the UK market, that’s a positive sign.

Or should I say, investor loathing of the UK is a relatively positive sign.

The risks of ‘buying the dip’

Some pundits are advising investors to ‘buy the dip’ in share prices after their Trump-inspired sell-off.

You do so at your peril.

Stock markets hate recessions. There have been seven of these over the last 61 years. This suggests there’s a 50% chance of one occurring within the next five years.

And that’s just based on historic stats. Looks at today’s news flow and the risks of worldwide recession are growing all the time.

Despite bullish activity surveys, US economic growth isn’t coming though anywhere near as strongly as hoped. The EC’s March measure of economic sentiment suggests that European expansion is peaking. And China is overdosed on debt.

Then there’s the potential damage that could be done by those Trump tariffs.

Bloomberg Economics reckons that a worldwide trade war could cost as much as $470bn in lost global GDP.

What’s more – to return to another of my previous themes – major worrying signs are starting to appear in the money markets.

The London Interbank Offered Rate (LIBOR) is the key benchmark interest rate for short-term loans around the world. It’s also a reference point for interest-rate swaps (derivatives that reduce or increase exposure to interest rate changes) and some mortgages: about $350 trillion worth of assets in total are pegged to LIBOR.

The chart below shows LIBOR over the last 30-plus years. As you can see, it has risen to its highest level point the great financial crisis of 2008-09.

Of course, interest rates are much lower now than they were three decades ago. But financial markets have adjusted to current levels. So the important aspect to consider is the rate of change in rates. And they’ve risen from almost zero to around 2.3% (i.e. slightly higher than the chart shows. In percentage terms, that’s a massive move. 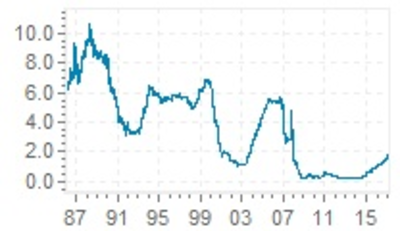 After the great financial crisis, European and US banks were caught rigging the reported rate to boost their trading bets. Since then, LIBOR has been calculated by ICE Benchmark Administration. Regulators and bankers have been trying to phase it out, but so far without success. Now LIBOR is biting back.

Its rise means a further tightening of financial conditions at a time when the US Fed is already hiking its own benchmark rate. The effect will be increased mortgage payments for many and also higher corporate borrowing costs. “Everybody wants LIBOR to go away,” Jim Bianco, president of Chicago-based Bianco Research, tells Bloomberg. “But nobody has a better alternative to really use for now. So here we are.”

If the planet hadn’t leveraged up so much in recent years, a LIBOR rise wouldn’t have mattered so much. But because global debt has continued to surge, it does.

To sum this up, then: stock markets have rallied on hopes that the worst is over. And the UK may be a good contrarian home for the money that you do want to leave in equities. But this country can’t overcome global concerns. And these range from wide-ranging long-run fears to scary developments that are happening now.

While ‘buying the dip’ may sound appealing, it’s fraught with risk. For the moment, the recovery has stalled and prices are falling again. If stock markets rally any higher, though, extracting extra cash makes much more sense than piling in further.

Trump will use the "nuclear option" on trade

How pot quietly took over the world

Economy
Author David StevensonPosted on 4th April 20185th July 2018
The Bitcoin price is heading south again. I last wrote about Bitcoin in the Daily Reckoning exactly four months ago. Since then the price...

Economy
Author Jim RickardsPosted on 1st May 20185th July 2018
We’re all familiar with the so-called “run on the bank.” It usually begins quietly with just a few depositors getting nervous about the solvency...

Economy
Author David StevensonPosted on 19th July 201924th July 2019
Has the world’s economy really recovered from the 2007-2009 great financial crisis? OK, a lot of monetary chicanery such as quantitative easing (in effect,...