Netflix released its quarterly earnings report yesterday and, despite some record-breaking numbers, investor response was lukewarm. (And, as we all know, lukewarm is the worst temperature.)

The Queen of Streaming attracted a record number of subscribers in Q1 of this year, blowing analysts’ projections out of the water.

Despite this, Netflix’s stock dropped 5% almost instantly when the report was released. The stock eventually recovered to a 3.04% gain by the end of day. The stock remained volatile today, fluctuating wildly in the morning trades.

But what was it about the report that put the wind up investor’s skirts?

Despite a record number of subscribers this quarter, only 1.7 million of those users were home-grown, domestic users from the good ole U.S. of A.

Investors are likely worried that domestic growth is slowing due to an increasingly crowded market place.

In the last few weeks, both Apple and Disney announced their own streaming services. And Disney’s slate of original content is making it look like a serious competitor.

And The Mandalorian (a Star Wars epic with a Game of Thrones budget) is the kind of show that could make or break a platform. (As long as it doesn’t upset the rabid fan base.) 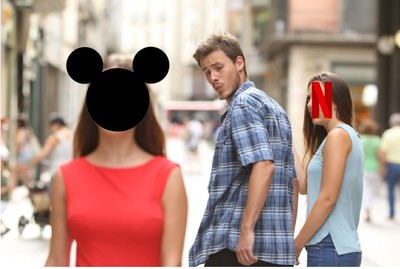 But with only 1.7 million users in the U.S., investors are worried about slowing domestic growth.

In a video released yesterday afternoon, Netflix CEO and stock photo of a middle-aged man Reed Hastings said that he welcomes competition in the streaming space. The more people that cut the cord from cable and change to the streaming mindset the better.

“There’s a ton of competition out there,” Hastings said. “Disney and Apple add a little bit more, but frankly I doubt it will be material because again there’s already so many competitors for entertainment time.”

Netflix’s projected numbers for weren’t as optimistic as our old pal Reed, however.

Projected earnings were down to just 55 cents a share, down from 85 cents a share this time last year and far lower than analyst predictions of 99 cents a share. (Don’t be too hard on them. They are just guessing after all.)

U.S subscribers for Q2 are predicted to fall as low as 300,000, which fits the narrative of slowing growth. Though Netflix attributes this effect to a recent price increase which they expect to level off in the coming months as folks adjust to the new norm. (The New Norm should have been the name of Norm MacDonald’s Netflix series.)

CEO Reed Hastings sees the future of television as an all streaming, no cable service, where customers subscribe to multiple platforms instead of paying one big cable bill.

Could you make the switch? If not, what is the one thing that could tempt you to cut the cord forever?

Bill Gates has released a curated list of the top ten breakthrough technologies of 2019. And one of them is a tasty burger.

These discoveries run the gamut from our stomachs to our sewers to nuclear reactors. But each breakthrough promises to revolutionise their own respective industries and, according to the alpha nerd himself, define “this moment in technological history.”

In a lengthy introduction to the list, published in MIT Technology Review, Bill compares 2019’s breakthrough technologies to the miracle of the plow. (A lot. Seriously, there’s like 3,000 words here on how good plows are. We get it, Bill. You like plowing.)

“My selections include amazing new tools that will one day save lives, from simple blood tests that predict premature birth to toilets that destroy deadly pathogens,” says Bill.

“I’m equally excited by how other technologies on the list will improve our lives. Wearable health monitors like the wrist-based ECG will warn heart patients of impending problems, while others let diabetics not only track glucose levels but manage their disease. Advanced nuclear reactors could provide carbon-free, safe, secure energy to the world.

Here’s a lighting round breakdown of Bill’s top 5, with the full list available on Technology Review’s website:

Robots suck at picking up stuff.

They’re great for crushing bones and killing all humans. But when it comes to tasks that require a more delicate touch, they suck.

“Using what’s known as reinforcement learning, neural-network software learns how to grasp and turn the block within a simulated environment before the hand tries it out for real,” says Bill. “The software experiments, randomly at first, strengthening connections within the network over time as it gets closer to its goal.”

The result is a learning robot that can deal with the messiness of real life and change tactics on the fly. (Can you say, “pick up my boxers robot butler!”)

There’s a new wave of nuclear reactors getting close to completion. (This “new-wave” is unrelated to the genre of music that gave us the B-52 masterpiece Rock Lobster.)

This new wave of reactors are smaller, generate more power, can save money, and reduce environmental risks (like exploding and killing everyone in a 10-mile radius).

Stephen Quake, a bioengineer at Stanford, has developed a simple blood test that can determine if a baby will be born prematurely.

Doctors can then take steps to prevent early birth for as long as possible and give the baby the best chance for survival.

Guillermo Tearney, a pathologist and engineer at Massachusetts General Hospital, is developing a swallowable capsule that contains a miniature microscope.

The tech can be used to test for cancer, deadly gut diseases, and a host of other illnesses. (No longer will we have to shrink down Martin Short and inject him into our bloodstream in a tiny space ship.)

A German startup called BioNTech is developing a vaccine for cancer cells.
Each vaccine would be custom made for the patient and would train the body to identify the presence of cancer and shut it down before it happens.

“By using the body’s natural defenses to selectively destroy only tumor cells, the vaccine, unlike conventional chemotherapies, limits damage to healthy cells,” says Bill. “The attacking immune cells could also be vigilant in spotting any stray cancer cells after the initial treatment.”

The full list, available on Technology Review’s website, includes the meatless burgers we’ve been watching closely here at OLT. As well as a wearable ECG smart watch and a sewer-free sanitation System.

Which of Billy’s favorite tech is your favorite?

66-year-old Jo Cameron has debilitating arthritis that should be agonising.
But even though she can barely move her thumb, she says it “feels fine.”

In fact, everything “feels fine” to Jo.

Because she’s got drugs in her genes.

A Life Without Pain

Despite a history of the usual health problems a 66-year old will experience over the course of a lifetime, Jo has never felt pain.

When her hip was replaced, she took no drugs. When she gave birth, she described the experience as a “tickle” (bottle that and you’ll be a millionaire overnight).

On multiple occasions, she’s burned her hands, only to realise it when she smelled the pungent odor of burning flesh.

But what’s even more remarkable is how “chill” Jo manages to stay under pressure.

Recently, she was in a violent car crash. But she felt no stress or anxiety. (And I can tell you from experience that car crashes are at the very least mildly stress inducing.)

That’s because Jo has a special gene that pumps her body full of relaxing, pain-relieving drugs 24-7.

Your Body is a Temple, Mine is a Drug Factory

The gene is a mutation of a gene called “FAAH.”

The genetic researchers who discovered the gene in Jo (and who are very funny) are calling this new chiller version of the gene the FAAH-OUT gene. (This isn’t a joke.)

This gene produces elevated levels of a cannabinoid known as anandamide in the human body. Anandamine promotes feelings of euphoria, happy feelings, and pain relief.

It’s produced in small amounts during exercise. But Jo has 75% more anandamide in her blood than the average person.

This revelation gives researchers hope for creating a natural pain-reliever and anti-depressant that could be produced by your own body.

If they could, would you make the switch?

No pain and a constant euphoric high… but you give up your pain response, which is considered to be integral to our survival.

Stock market to carmakers: hurry up and go electric

Economy
Author Sean KeyesPosted on 27th March 20193rd April 2019
If you ever find yourself in a Dublin pub chatting amiably with the fella beside you, here’s some advice: don’t mention the EU. The...

Economy
Author Pieter CranenbroekPosted on 17th December 2018
UK retailers have struggled all year. Now even the most lucrative time of the year threatens to be spoilt for them.