Or, as one dramatic Forbes writer put it: “With one swift stroke, like a samurai warrior felling a worthy opponent, [Apple’s Craig Federighi] ended iTunes.” (Just take a sabbatical and write that YA novel you’ve always wanted to, David.)

Apple’s (AAPL) opening keynote at the developer’s conference, WWDC, marked an end to what was arguably the most impactful piece of software Apple ever released.

And just like a “samurai warrior” felled by a “worthy opponent,” iTunes will now be broken down into three smaller samurais that perform essentially the same function but separately.

The Good, the Bad, and the U2 Album Nobody Wanted

As an online market, iTunes might seem unremarkable today. But back in the Wild West days of the MP3, this digital music platform was the innovation that gave Apple the edge over its competitors.

No longer did you have to transfer the music from every CD you owned onto your MP3 player.

No longer did you have to navigate the unwieldy transfer process alone.

No longer did you have to scroll through the 15 different versions of the Shrek Soundtrack to get to that one Alicia Keys song you liked. 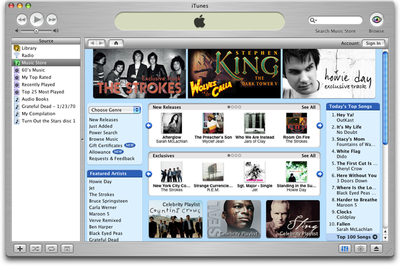 Ah, the early 2000s. Stacy’s mom had it going on. The Strokes were still relevant. And everyone wanted to know what music Sting was listening to. Dark times.

More than any other feature, iTunes is what made the iPod the iPod. (Except maybe that terrible time Bono forced everyone to download U2’s new album.) But in recent years, with the podcast boom and the advent of digital video downloads, the app has become bloated, slow, and unwieldy.

From here on out, the fallen samurai will be replaced by Apple Music, Apple Podcasts, and Apple TV. Each of which will perform the same functions as iTunes, but should be faster and “easier to use.”

So unless you’re going to prop your new $5k monitor up with a bookstand and some gum, you better be prepared to fork over the cost of an entire mid-level laptop for a plastic stand.

President Trump called for a boycott of AT&T (T) yesterday, after being forced to watch 10 minutes of CNN on a diplomatic visit to the UK.

President Trump is in Britain this week, rubbing elbows with the Royals, putting London’s Mayor on blast, and (more than anything) not watching Fox News. 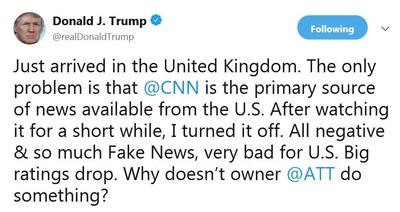 Actually, the UK’s primary source of U.S. news is a channel that broadcasts 24-hour Friends reruns.

The president was upset (or as they say in the UK: “having a right wibbly wobbly”) that the only U.S. news source on British TV was CNN International — a version of CNN that features global news coverage.

And it probably didn’t help that the president’s favorite 24-hour news channel is unavailable in the UK. Fox News stopped broadcasting to the UK in 2017 because nobody was watching it.

After 10 minutes of not-Sean Hannity, Trump called for a boycott of AT&T, which recently acquired CNN’s parent company Time Warner for a cool $85 billion. 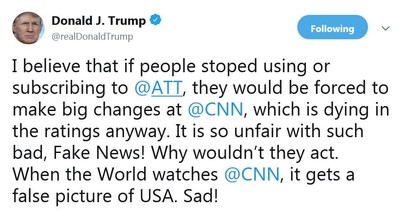 Say what you will about our president, but he doesn’t frivolously waste consonants.

Despite everything, investors seemed generally unworried by the president’s call for a boycott. AT&T’s stock closed up 1.7% yesterday and continued to rise this morning.

A court in Sweden has ruled that Julian Assange does not “need to be detained” for a sexual assault investigation, hamstringing Swedish prosecutors ability to extradite the world’s worst house guest.

Assange has been avoiding extradition to Sweden for the last seven years by hiding in (and just generally kind of moping around) the Ecuadorian embassy in London.

Sweden dropped its investigation in 2017. But it was reopened after Julian was kicked out of the embassy last month for skateboarding indoors and not cleaning up after his cat.

Assange’s Swedish defence lawyer, Per Samuelson, argued successfully that because Assange was so thoroughly locked up, he posed no flight risk: “He is in prison for half a year at least, and he is detained on behalf of the United States. So there is no point detaining him in Sweden too.”

Assange’s lawyers added that Assange “has always wanted to cooperate with the investigation.” (As long as his cooperation didn’t involve him getting out of his bed at the Ecuadorian embassy.)

Elisabeth Massi Fritz, lawyer for the woman who accused Assange of rape, pointed out that it was naïve of the courts to expect Assange to cooperate after seven years of very much not cooperating.

The court’s decision clears the way for Assange’s extradition to the U.S. where he’s been indicted on one count of conspiracy to commit computer intrusion and charged with 17 counts under the Espionage Act.

It’s unclear if the Swedish prosecution plans to appeal the ruling. Regardless, for now, the hacktivist/accused rapist will remain in a British prison (or clinky clanky as they call it) where he is serving a 50-week sentence for skipping bail.

Baltimore Was Hacked With NSA Tech

It’s been a whole month since a cyber-attack infected and froze thousands of Baltimore City computers. 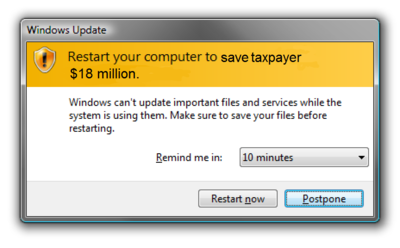 It’s worth noting that a Baltimore City official has said that EternalBlue was not the cause of the attack. However, four separate sources who have been charged with recovering the data have said they found traces of EternalBlue in the Baltimore system.

Economy
Author Sean KeyesPosted on 27th May 20165th July 2018
I love writing about alternative finance because I get such great emails about it. It turns out that lots of Risk and Reward subscribers...

Economy
Author Pieter CranenbroekPosted on 5th January 20185th July 2018
Trump can put America first like he promised his voters, but it'll go at the expense of the dollar.