We’ve been covering the pro-democracy protests in Hong Kong for six months now.

Nobody thought the protests could or would go on as long as they have. And when you’re reporting on something for as long and as frequently as this, it’s easy to get lost in the weeds.

So today, I’ve asked my colleague and resident China expert Jim Rickards to swing by and offer up a fresh perspective.

Jim says the situation is more dangerous than the international community realises and will tell you how to shift your allocations to protect against the financial fallout:

“Hong Kong has been making headlines the past four months due to street demonstrations against both the local administration of Carrie Lam and her bosses in Beijing.

“The escalation has been matched and prompted by escalating police tactics including thinly disguised thugs, rubber bullets, water cannons, armored vehicles, digital surveillance, arrests and the substitution of paramilitary forces for regular police.

“Violence came to a head last week when an 18-year-old protestor was shot with a live round at point-blank range (the protestor survived).

“The protestors show no signs of backing off their protests or demands. Continued escalation and more violence can be expected.

“Western markets have been remarkably complacent about these events. It’s almost as if the physical distance to Hong Kong insulates the West from the disruption.

“That view is a mistake.

“Physical distance is irrelevant in a densely connected digital world. Hong Kong is one of the largest financial centers in the world alongside New York, London and Tokyo.

“Already capital flight is emerging, GDP is dropping, property values are declining and talented professionals are moving out. Regional financial businesses are shifting rapidly to Singapore.

“At a minimum, this represents sheer economic waste. At worst, an unexpected entity failure or market crash could spark global contagion and a liquidity crisis.

“Complacency is not an option.”

The entire NBA would like to “express regret” and “deeply apologise” for a single tweet that threatened billions of dollars in revenue from our old friend China.

Morey quickly deleted the tweet but I’m afraid that’s not how the internet works, Daryl.

China responded in a calm and totally reasonable manner, severing all business ties with the Houston Rockets, the most popular basketball team in China. (Well, not anymore I guess.) 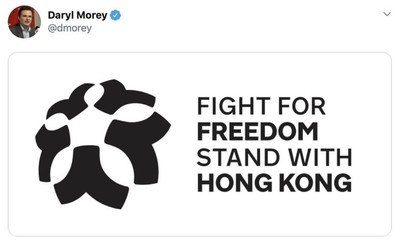 Fight for freedom! Unless a totalitarian regime signs your paycheck.

Within moments of hitting send, all Chinese sponsors announced they would drop the team immediately. (And I’m sure they came to that decision all by themselves without any pressure from a certain totalitarian government.)

Chinese broadcasting said they would no longer air the immensely popular Rockets’ games and the Chinese Basketball Association (who’s President just so happens to be former Houston Rocket and professional ceiling-bonker Yao Ming) officially severed all ties with the group.

The Rockets became the most popular team in China during Yao’s nine-year tenure just kinda putting the ball in the basket. But that same “special relationship” now threatens to unravel billions of dollars in deals for the NBA.

Morey sent out a couple more tweets last night, saying his opinions did not represent those of the Houston Rockets or the NBA (it would be weird if they did).

The Rocket’s general manager shied away from making an actual apology, instead saying he was “merely voicing one thought, based on one interpretation, of one complicated event” and has since had the opportunity to “consider other perspectives.” (Like the perspective of someone who has been blacklisted from the NBA, for example.) 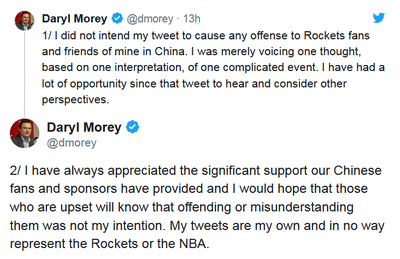 Hold on, Morey, let me just grab a paper towel. It looks like you got your lawyer’s fingerprints all over your tweets.

The NBA responded in a statement saying the league was committed to the values of free speech… as long as its members didn’t use those values to talk about China because there is just so, so much money on the line here, guys.

“The values of the league support individuals’ educating themselves and sharing their views on matters important to them,” an NBA spokesperson said.

“We have great respect for the history and culture of China and hope that sports and the NBA can be used as a unifying force to bridge cultural divides and bring people together.”

The NBA’s milquetoast response quickly drew the ire of politicians from both sides of the aisle, with bipartisan comedy duo Ted Cruz and Julián Castro condemning the NBA’s message.

“China is using its economic power to silence critics—even those in the U.S.,” said Democrat presidential candidate Castro. “The United States must lead with our values and speak out for pro-democracy protestors in Hong Kong, and not allow American citizens to be bullied by an authoritarian government.”

GE (General Electric Company) announced this morning it was freezing pension plans for 20,000 U.S. employees, in an attempt to slash debt and generally not have to give its employees a whole bunch of money.

Ice to See You: When a company freezes its pension plan, employees covered by the plan stop earning the benefits of the plan moving forward.

This is all part of an ongoing financial effort by CEO Larry Culp, who has been aggressively slashing costs and raising cash to pay off the company’s sizeable debt since he took over a year ago.

As of June this year, the multinational conglomerate that does a little bit of everything held total borrowings of about $105.8 billion, with an industrial net debt of $54.4 billion.

“Returning GE to a position of strength has required us to make several difficult decisions, and today’s decision to freeze the pension is no exception,” said Chief Human Resources Officer Kevin Cox, who’s unsure of how he got saddled with the job of making this announcement.

GE said that retirees already collecting pension benefits will be unaffected. And it will offer a lump-sum payment to 100,000 former employees who haven’t started their monthly pension plan payments.

Shares of GE rose 3% on the awesome news of all those pensions going away.

A federal judge has ordered President Trump to hand over his tax returns to the district attorney of Manhattan, in the latest twist of an ongoing scandal you and I and everyone else had completely forgotten about. (There’s a lot going on.)

In his 75-page ruling (which could use some editing), Marrero called the president’s argument “repugnant” and said that presidents, their families, and businesses are not above the law.

“This Court cannot endorse such a categorical and limitless assertion of presidential immunity from judicial process as being countenanced by the nation’s constitutional plan,” said Marrero, who, like all judges, writes like an alien who learned English from a thesaurus.

In the past, we’d have to wait on a White House press conference to find out how the president feels about all this. But a wizard at the carnival grounds sold me a magic machine, called Twitter, that lets me know what the president is thinking at all times:

Daniels claims that Michael Cohen paid her off with campaign funds to keep her quiet about an affair with then-candidate Trump. While the president denies that an affair happened in the first place.

With all that said, I wouldn’t buy a ticket for Rachel Maddow’s Fantastical Tax-Return Hype Train just yet.

Trump’s lawyers have already appealed the decision and the appeals court has temporarily blocked the order. Even if the district attorney’s office gets its mitts on the returns, the documents would be subject to grand jury secrecy rules and wouldn’t be made public.

Trade War About to Get Worse

Politics
Author Shane OrmondPosted on 8th October 20199th October 2019
The U.S. has added 28 Chinese tech companies to an export blacklist, citing the role they played in the regime’s oppression of millions of...