If you’re anything like me you’re probably sick of hearing about the Mueller report. (I actually toyed with running a different story in the top slot today. But there’s some fun stuff here. So, why the heck not?) 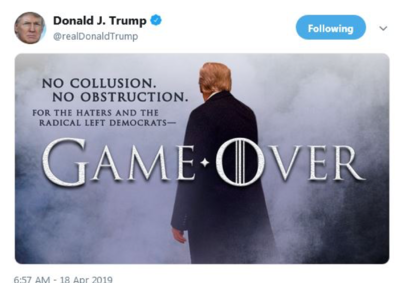 Trump celebrated the release of the report with a very presidential Game of Thrones meme.

So let’s do a quick rundown of the highlights:

No Collusion, No Obstruction, No Conclusion

But it also couldn’t “exonerate” him. (Way to play hard to get, Mueller.)

This comment seems to be lifted directly from page 182 of the report which states:

If we had confidence after a thorough investigation of the facts that the president clearly did not commit obstruction of justice, we would so state.

Based on the facts and the applicable legal standards however we are unable to reach that judgment.

The evidence we obtained about the president’s actions and intent presents difficult issues that prevent us from conclusively determining that no criminal conduct occurred.

Accordingly while this report does not conclude that the president committed a crime, it also does not exonerate him. [Emphasis my own.]

Dems believed this was a clear example of Barr mischaracterising the contents of the report. But nope, it’s as non-committal and awkward a judgment as it sounded in Barr’s summary.

I’m surprised Mueller and his team are able to walk right after this impressive display of fence sitting.

Mueller’s report detailed 10 separate “episodes” where the president might have obstructed justice. (Sounds like a new season of House of Cards.)

But the report also says that:

Unlike cases in which a subject engages in obstruction of justice to cover up a crime, the evidence we obtained did not establish that the president was involved in an underlying crime related to Russian election interference.

Basically, there’s no evidence that crime was committed. If there’s no crime, you can’t obstruct an investigation into that crime.

Then again, whether or not the president knew he was innocent is another thing entirely.

According to page 78 of the report, when Trump found out Mueller had been appointed special counsel he “slumped back in his chair and said, ‘Oh my God. This is terrible. This is the end of my presidency. I’m f***ed.'”

(Don’t worry Mr. President. I feel the exact same way when I see a cop in Walmart, even though I know I’ve done nothing wrong. Well, I probably shouldn’t have bought that second bag of Doritos. But nobody’s perfect.)

The Laws of Redaction

Much ado has been made about the substantial redactions in the report.

If you’re a Dem, you probably think that’s where the real criminal activity is hidden.

If you’re a Republican, you probably think that information is sealed by law.

The truth is probably somewhere in between. 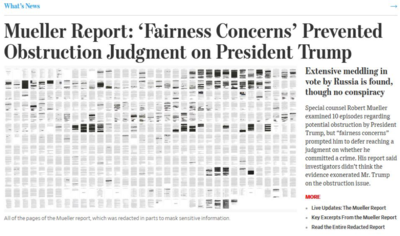 The Wall Street Journal compiled a visual representation of all the redacted information. (Maybe those guys aren’t total hacks, after all.)

Barr said that the redacted info falls into four categories:

Samsung’s $2,000 folding smartphone is scheduled to hit stores next Friday.

But according to tech reviewers who got their hands on the phone early, the phone has some issues.

(And by “issues” I mean the phone is easier to break than Rick Perry’s train of thought.) 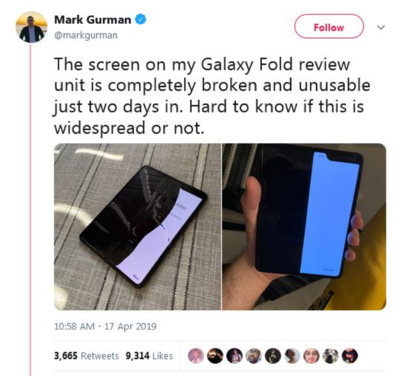 Who would have thought a screen that bends in the middle would be easy to break?

Samsung was counting on a successful launch of the $2,000 Oh-No Phone to secure its market dominance as the world’s biggest smartphone company.

Chinese phone manufacturer Huawei beat out Apple last year to claim the No. 2 spot. (Which explains why Apple is suddenly more interested in making TV shows with Steve Carrell.)

Huawei executives have named 2020 the year when it takes the crown from Samsung. Samsung was hoping the Galaxy Fold would buy them enough time to come up with whatever the next wacky phone idea is. (A smartphone you wear as a face mask. Smartphones for dogs. Smart underwear. Hit me up, Samsung R&D.)

The Galaxy Fold is an industry first — a phone with a tablet-sized screen that can fold in half to become a regular-sized giant smartphone.

Not only has Samsung managed to beat Huawei to market with this revolutionary bendy mess, its undercut Huawei’s target price by $600.

(You could buy a second smaller smartphone with that money.)

Of course, none of that matters if the phone doesn’t work. Multiple reviewers are posting that their Galaxy Fold broke within hours out of the box.

The No. 1 problem seems to be that a thin film on the surface of the phone that looks like a protective screen and is very easily peeled off (the best part about buying a new phone) is actually the phone’s screen.

Peelable screens aside, reviewers have reported multiple issues with the “foldable” phone, including busted hinges and flickering screens.

Samsung’s stock slid 3% in the morning trading. But it’s going ahead with its plans for an April 26 launch date. (Good luck with that guys. I’m sure it will go great.) 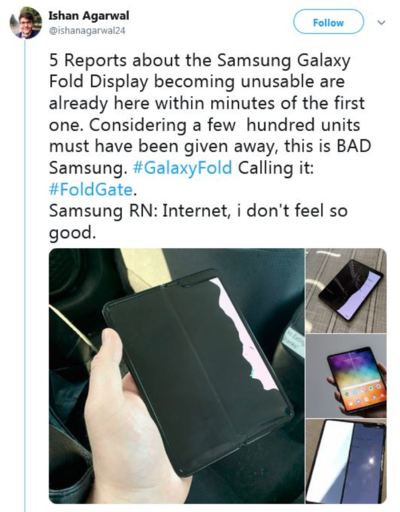 Twitter is calling it #FoldGate. Because we had a cool name for one scandal in the 70s and we are never giving it up. (#WaterFold #NotEverythingIsWatergate)

Had you planned on getting the fold? Would you still get one after #FoldGate?

This Message Was Approved by Mazu the Sea Goddess

You might know Gou as the billionaire founder of Foxconn — the Taiwanese company that manufactures Apple’s iPhone.

Gou has no experience with politics. But when Mazu the Sea Goddess tells you to run, you run.

“Today, Mazu told me I should be inspired by her to do good things for people who are suffering, to give young people hope, to support cross-strait peace.

“Mazu said I must take care of the youth,” Gou told reporters in a press conference in one of Mazu’s temple in Taipei. “I must do everything I can to help those who are struggling.”

Reportedly Mr. Gou has been toying with the idea of a presidential run for some time now. But Donald Trump’s win in 2016 was extremely encouraging for billionaires who fancied themselves world leaders. (*Cough* Sorry, I mean Mazu the Sea Goddess told him to run.) 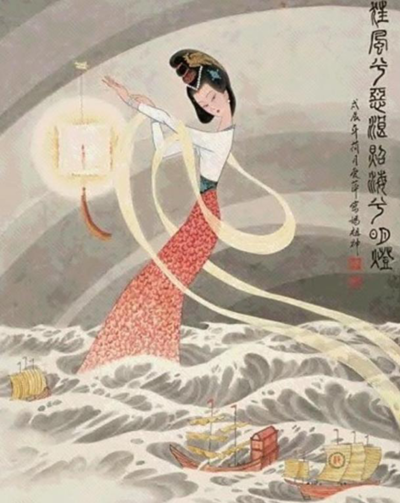 Mazu the Sea Goddess is a giant lady who protects sailors. She also has opinions on the economy and Taiwan-China relations.

Mr. Gou has already established a relationship with the U.S. administration, which gives him a crucial leg up in the coming election.

He’s visited the White House on multiple occasions (I wonder if he got the Whopper or the Filet-O-Fish) and President Trump has called him “one of the great businessmen of our time.”

But the ace up his sleeve may be Gou’s access to top Chinese leadership which he cultivated through his business. Taiwan’s rocky relationship with China, Taiwan’s biggest trading partner, is going to be a key issue in the coming election.

Even the Sea Goddess Mazu knows that. She told Gou he must run for president to fix Taiwan’s economy and mend the country’s relationship with China. (Of course, Mazu is a Chinese Sea Goddess so she’s probably a bit biased.)

What do you think of this trend of billionaires who want to run the world?
Do their success and specialist knowledge make them uniquely qualified for the modern world?

Or are they just a bunch of spoiled brats who have more cents than sense?

I have some exciting news, folks.

One Last Thing has officially started working with analyst Graham Summers, the author of the bestselling book The Everything Bubble: The Endgame for Central Bank Policy.

You’re going to start seeing his analysis and insights here in the pages of One Last Thing. (I know we don’t have actual pages. Indulge me.)

But this isn’t just an introduction to a new colleague. This is still your One Last Thing.

I met with Graham this morning to talk shop… and he says there’s something in the markets that we need to be aware of:

“We know that the Trump administration views the stock market as ‘a report card’ on President Trump’s policies,” says Graham.

“Indeed, the President recent tweeted that if the Fed had not engaged in Quantitative Tightening that the Dow would have been at 35,000 if not 40,000 already. 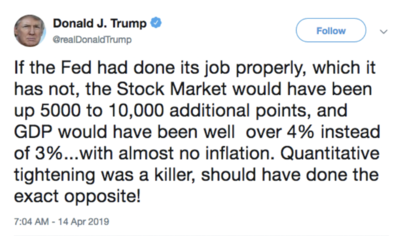 “With that in mind, it is clear that President Trump has given Fed Chair Jerome Powell his orders. Those orders are ‘stocks need to go up… or you’re fired.’”

So what does this mean?

“The Fed is DONE with tightening. It is not coincidence that immediately after Fed leadership had dinner with President Trump that every major Fed official starting pushing for QE, NIRP, and other more aggressive monetary policies. Indeed, the markets now believe the Fed will CUT rates in 2019, not raise them.

“More Fed easing means inflation will run hot… and so will the economy. The Fed’s own GDP model shows GDP growth was already at 2.4% while the Fed was still tightening. With the Fed no longer doing this, and possibly even easing before year-end, there is potential for a REAL inflationary spike later this year.”

If Graham is right (and I trust he is) this is going to have major repercussions on the American economy and your money.

We’ll have more insights from him on this developing story and how to position your money in the coming weeks.

Economy
Author Kit WinderPosted on 22nd July 202022nd July 2020
This morning, I was adjusting an old model of one of our portfolios here at Southbank Investment Research. In some services, our editors and...

Economy
Author David StevensonPosted on 29th June 20195th July 2019
It’s getting ever-harder to split politics from financial markets. We’ve just heard Donald Trump thanking himself via Twitter for sending many US shares to...

Economy Investing
Author David StevensonPosted on 22nd March 201922nd March 2019
Thank you for your responses to our UK Uncensored Brexit articles. I’ve been reading through them. And I share the frustrations that have been expressed by...