Netflix CEO Reed Hastings is defending his company’s decision to remove content from its platform on the request of Saudi Crown Prince and famous journalist murderer Prince Mohammed bin Salman.

Earlier this year, Netflix removed an episode of Hasan Minhaj’s Patriot Act about Saudi Arabia and the assassination of Washington Post journalist Jamal Khashoggi — a move widely criticised by free speech advocates and anyone with more than three jellybeans between their ears.

“We’re not in the truth to power business,” said Hastings. “We’re in the entertainment business.”

This might have been a compelling argument if Patriot Act wasn’t an original Netflix show and the platform wasn’t overrun with activist content. In 2019, most of Netflix’s new content is either activist documentaries, food in slow motion, or the drunk horse cartoon.

It’s not that Netflix isn’t “in the truth to power business.” It’s just not in the “truth to money business.”

Although the episode was taken down from Netflix in Saudi Arabia, it’s still available to watch on YouTube, where it has more than 2.9 million views — significantly more than any other episodes of Minhaj’s show.

Coca-Cola is launching a line of flavoured seltzer waters to compete with LaCroix — a company who’s CEO once compared owning a brand to “caring for someone who has become handicapped.” (How are you dudes getting trounced by this guy?)

The soda giant’s new line of barely flavoured nonsense water will come in eight questionable flavour combinations and be branded simply as “AHA.” (Our thoughts and prayers go out to the Coca-Cola marketing department who seem to have suffered from some sort of collective brain injury on this one.)

Trying to set themselves apart from every other company hocking fizzy water with a taste right now, AHA’s flavours are exclusively “and”-based affairs like strawberry and cucumber, orange and grapefruit, and apple and ginger. (Such innovation!)

The selection bizarrely also includes two caffeinated options — citrus plus green tea and black cherry plus coffee — because it wouldn’t be a Coca-Cola product without at least one addictive stimulant. 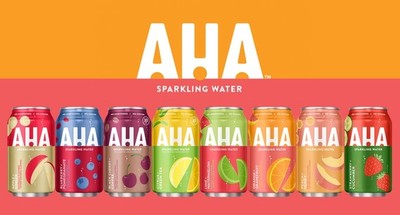 This isn’t the first time Coca-Cola has tried (and failed) to penetrate the fizzy water market. But in 2019, the company is desperate to make an impression on the patterned, short-sleeved shirt wearing crowd before it’s too late.

As we move away from heart exploding concoctions of sugar and water, Coca-Cola has struggled to defend its market share. Between 2013 and last year, the company’s revenues fell 32% from $46.8 billion to just $32 billion.

In the first half of 2019, Coca-Cola drove an uptick in sales with “healthier” (wink) no-sugar versions of its classic soft drinks. The success that effort delivered rose 2% growth in sales last quarter. And for 2020, the company’s eyeing up the $550 million global market for flavoured seltzer water.

“As the largest and fastest-growing part of the category, mainstream flavoured sparkling water is a segment we know we must double-down on. AHA is our big-bet brand in this big-bet category,” said Celina Li, vice president of water in Coca-Cola North America, in a statement.

(The “vice president of water” sounds like one of those made-up titles dictators hand out to anyone willing to part with a bag full of money.)

Shares of LaCroix maker National Beverage (FIZZ) fell almost 11% after the news landed yesterday. Year to date, the stock is down 44%, which CEO Nick Caporella attributes to “injustice,” trade war tariffs, and, as mentioned above, brands behaving like “someone who has become handicapped.” (Seriously. Can we get this guy out of here?)

(If you’re still in Long Island, guys, I recommend swinging by Matt’s Pizza for a slice. They have the flakiest dough, meltiest cheese, and they don’t sell Chinese tech to our military. 5 stars.)

The Justice Department says Aventura Technologies undermined national security by selling Chinese technology, disguised as U.S.-made goods, to the U.S. military, all in the name of a quick buckarooney.

According to the Brooklyn U.S. attorney’s office, these ding dongs exposed the U.S. government to serious cybersecurity risks by creating a “channel by which hostile foreign governments could have accessed some of the government’s most sensitive facilities.”

For years, Aventura claimed all its tech was built in house. When in actual fact, the company was simply buying the stuff in China and changing the stickers to say Made in the USA. (Great vetting by the U.S. military by the way.)

New York prosecutors say Aventura generated upwards of $88 million with this grift, including over $20 million in federal government contracts.

Cabasso has a long criminal history which includes, but is not limited to, grand larceny, wire fraud, mail fraud, and conspiring to influence a juror. So yeah, why wouldn’t the U.S. military be doing business with him?

According to the court papers, Cabasso exchanged multiple emails with his Chinese partners stressing the importance the tech should have zero indication of its origin, which I am thoroughly looking forward to hearing him explain in court.

“Greed is at the heart of this scheme, a reprehensible motive when the subjects in this case allegedly put into question the security of men and women who don uniforms each day to protect our nation,” said FBI Assistant Director-in-Charge William Sweeney in a statement.

Aventura’s equipment is currently installed in dozens of Army, Navy, and Air Force bases, Department of Energy facilities, and Navy aircraft carriers. (And their IT departments are going to have one heck of a weekend.)

The Worst Human Rights Atrocity of the 21st Century

Don't Have a Partner? Maybe You Should Get One!

Britain’s small-cap index is in desperate need of a boost. Tom Bulford looks at two of the index’s latest listings and asks whether they have what it takes to entice back investors.