The House Financial Services Committee hit Zuckerberg with a landslide of questions that, like a session of quality lovemaking, left everyone involved with a bad taste in the mouth and a vague sense of dissatisfaction.

Chairwoman Maxine Waters (D-CA) scolded the Zuckerberg avatar for a recent speech in which he doubled down on Facebook’s commitment to not vetting or fact-checking any of the political advertising on its platform. (But to be fair, we don’t know if this was the same alien wearing the Zuck suit that day.)

“The impact of this will be a massive voter suppression effort,” said the chairwoman. “Your claim to promote freedom of speech does not ring true.”

Mr. Zuckerberg defended Facebook’s decision to not vet its own advertisers, saying that he believes “people should be able to see for themselves what politicians are saying, and judge their character for themselves.”

In that spirit, I will list some facts about Mark Zuckerberg and I’ll let you decide which ones are true or not.

“You are not working hard enough, and end-to-end encryption is not going to help the problem,” Ms. Wagner said.

The Zuckerberg suit acknowledged that policing a global platform can be challenging but defended his company’s ongoing effort to stem the flow of literally millions of pictures of naked kids.

”We work harder than any other company to identify this behavior,” Zuckerberg said, and then turned to the camera and winked.

Zuckerberg also came under fire for the development of Facebook’s very own cryptocurrency, Libra. Lawmakers around the world are just the teensiest bit worried that, if mishandled, Libra may open new doors to criminal activity and potentially destroy the global financial establishment.

“You’re creating a whole new currency, which could be anonymous, that could create a whole new threat to Americans and national security, which is a huge concern,” said Rep. Carolyn Maloney (D-NY).

During the hearing and in interviews afterward, Rep. Patrick T. McHenry (R-NC), the committee’s senior Republican, came to Blorp’s defense on the issue of Libra, warning that the goal of the committee should not be to stifle innovation.

“My fear is that we now have American innovation on trial by policymakers here in Washington because they don’t understand it,” the North Carolina congressman said on CNBC’s Squawk Box after the hearing.

“Because they’re a big company doing this type of innovation, you have American policymakers trying to pounce on them. This also sends a chilling signal to innovation in the United States.”

As the Zuckerberg wrapped up its testimony, McHenry made a comment that summed up the theme of the day for actors on both sides of the aisle:

“Frankly, I’m not sure that we’ve learned anything new here.”

All told, Zuckerberg didn’t do anything too weird yesterday and that was enough for investors. Facebook shares climbed more than 2% during the testimony.

After a lackluster year of missed deliveries and buggy tech, Tesla gave investors a much-needed reprieve with a batch of surprisingly good news.

The world’s premier manufacturer of cars that can drive themselves into oncoming traffic reported Q3 revenue of $6.3 billion and adjusted earnings per share of $1.86, far exceeding analysts’ expectations of a loss of 42 cents per share.

In its report, the company announced it was ahead of schedule on its long-awaited Model Y crossover and had completed work on its “Gigafactory” in Shanghai and would soon announce the location of its European factory. (Building a factory in China in 2019? What could possibly go wrong?)

“Gigafactory Shanghai was built in 10 months and is ready for production, while it was ~65% less expensive (capex per unit of capacity) to build than our Model 3 production system in the US,” said the report.

Revenue was slightly lower than expected but Tesla’s gross margins rose from 18.9% to 22.8% in Q3, partially in thanks to deferred revenue from its newly released (and barely working) smart summon feature.

“Despite reductions in the average selling price (ASP) of Model 3 as global mix stabilises, our gross margins have strengthened,” said the company in its report.

For more on this, we go to Twitter, where Tesla CEO Elon Musk undoubtedly has some wisdom to share about Tesla’s success this quarter: 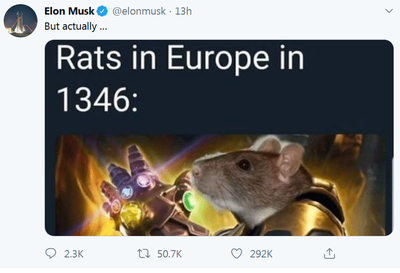 Shares of social media platform and BANE OF MY LIFE Twitter (TWTR) plummeted more than 19% this morning after whiffing profit and revenue forecasts.

The company which pipes the worst ideas of politicians and celebrities directly to my phone reported $824 million in Q3 revenue, falling short of the $874 million expected by analysts surveyed by FactSet.

The single worst thing to happen to journalism blamed the earnings miss on an ad bug that impacted the company’s ability to target ads and allow marketers to measure the effectiveness of their campaigns.

Which is fine, because marketers are all terrible people who deserve to have their lives ruined. (I’m just kidding, Greg. Please make us more money, so my stupid family can eat.)

On the company earning’s call Chief Financial Officer Ned Segal acknowledged that the company had done donked up and would likely continue to donk up well into Q4.

“Although we are working on remediation, there isn’t remediation yet in place, and so the effects of that will continue into Q4,” said Ned.

In a note to investors, MKM Partners analyst Rohit Kulkarni said he views Twitter’s issues as “largely internal, self-inflicted, and (probably) fixable over the near term.”

“However, amplified impact on revenues due to a one-time technical bug makes us wonder whether one can confidently have a view on Twitter’s long-term potential,” said Rohit. “Twitter’s turnaround has clearly hit a small detour, in our opinion.”

In the One Last Thing Exceptional Investors series, we get up close and personal with some of the best investors in the business and find out what makes them (and their bank accounts) tick.

Today, 10-time Trading Champion Chuck Hughes is back in the OLT HQ.

Chuck is a former fighter jet pilot for the U.S. Air Force who took $4,600 and turned it into $460,164 in profit in just two years… and has gone on to make millions since.

In today’s issue, Chuck is going to tell us all about the number one mistake investors make when trading.

Take it away, Chuck:

Most traders tend to trade with limited upside and unlimited downside.

They’ll sell a stock when they have a small profit, but continue to hold losing stocks.

Eventually they wind up with a portfolio of losers.

All because of emotional investing.

So keeping emotion off the table is crucial to long-term wealth in trading.

That’s why I have a set of basic risk management rules that I never deviate from.

Follow these rules and you’ll be on the road to practicing sound risk management.

It works with stocks, bonds, options — anything.

Maybe I got that kind of discipline from the Air Force, or maybe I was just born with a trader’s disposition. It’s hard to say!

Economy
Author Pieter CranenbroekPosted on 21st October 20165th July 2018
A general election before the Brexit procedure is triggered could benefit Britain. It would make it clear to everyone what kind of Brexit we...
Economy
Author Kit WinderPosted on 16th December 2020
I have the results of the poll! How many of you would take the vaccine, and how many said, “No chance”? All will be...
Economy
Author Kit WinderPosted on 5th May 20215th May 2021
Inflation is coming, and so is the energy transition. The last time any of us witnessed real, headline price inflation was in the 1970s....