Facebook’s Libra Association (which I’m pretty sure is already an organisation of comic book villains) has lost a quarter of its founding members, as financial institutions start to get cold feet about helping the Lizard Prince of social media launch his own global currency.

When Facebook announced Libra as a world-changing, stable cryptocurrency (that probably won’t destroy the dollar) in June, the project had the backing of 28 of the world’s biggest financial intuitions.

Since then, Libra has faced a bombardment of criticism and scrutiny from lawmakers around the world who are just the teensiest bit worried Zuckerberg is going to tank the global financial system.

Last week, two members of the Senate Banking Committee sent letters to the CEOs of Visa, Mastercard, and Stripe (that’s nice, nobody send sends letters anymore) to express deep concerns over Facebook’s Libra Association and to urge potential member companies to proceed with caution until Facebook is able to provide real answers.

“We are concerned because key questions remain unanswered about the risks the project poses to consumers, regulated financial institutions, and the global financial system. We urge you to carefully consider how your companies will manage these risks before proceeding,” the senators wrote.

The remaining 21 members of the Libra Association met in Geneva yesterday to sign the organisation’s charter and debate the merits of hiding your evil base in a hollowed-out volcano versus the surface of the moon.

If Zuckerberg can bring the same dedication and care he brought to social media to the global financial system, we’ll all be dead in ten years.

Shares of JPMorgan Chase (JPM) surged this morning after the bank that ate all the other banks posted record revenue above Wall Street expectations.

Until recently, rising interest rates have given the megabank’s lending operations a tidy little boost. But, as Canadian singer-songwriter and Grammy award-winner Nelly Furtado once said, “all good things come to an end.”

With the Fed cutting rates, JPMorgan’s interest expenses are trending upward. And global trade anxieties have businesses on the back foot.

And yet, the brave American consumer is somehow buying enough crap to hand the bank record profits above expectations.

“In the U.S. economy, GDP growth has slowed slightly. The consumer remains healthy with growth in wages and spending, combined with strong balance sheets and low unemployment levels,” CEO Jamie Dimon said in the earnings release.

“This is being offset by weakening business sentiment and capital expenditures mostly driven by increasingly complex geopolitical risks, including tensions in global trade.” 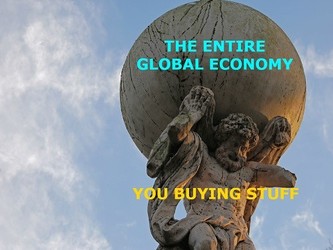 Despite fears of a global economic slowdown, regular folks like you and I have done a dandy job propping up the entire U.S. economy, borrowing more, repaying debts on time, and buying cool stuff that we probably don’t need. (Shout out to my fridge that is connected to the internet for some reason.)

Dimon claims this report demonstrates the “broad-based strength and the resilience” of JPMorgan’s business model, adding that consumer financial strength is “very powerful.”

“The consumer is not under strain. The consumer is doing fine,” said Dimon on a conference call this morning, desperately wanting to believe what he’s saying is true.

Shares of JPMorgan Chase (JPM) were up 2.9% in the early morning trading and have risen 19% since the start of the year.

Take a trip in the One Last Thing Crime Machine: In 2016, JPMorgan Chase agreed to pay $264 million to settle criminal charges, alleging the bank accepted bribes to hire hundreds of friends and relatives of Chinese government officials. 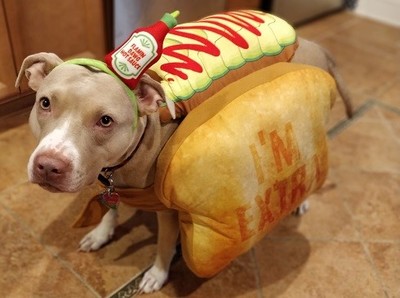 This is not technically “news” but it is my dog in a sandwich costume and I think that’s important and everyone should see it.

You join us as we resume our around-the-clock coverage of the raging dumpster fire filled with rotten deli meat that’s blocking the entrance to a local Arby’s… sorry, I meant to say the Turkish invasion of Syria.

Vice President and former host of the Mike Pence Show, Mike Pence, will embark on a diplomatic trip to Turkey, as the U.S. calls for Turkey to stop the whole genociding a U.S. ally and freeing imprisoned ISIS forces thing.

During his work-ation announcement (The Pences are going to the Republic of Turkey!), the Veep said President Trump had spoken directly with Turkish leader Recep Tayyip Erdoğan and made him promise not to attack the border town of Kobani.

“President Trump communicated to him very clearly that the United States of American wants Turkey to stop the invasion, implement an immediate ceasefire and to begin to negotiate with Kurdish forces in Syria to bring an end to the violence,” Pence said.

President Trump announced economic sanctions on Turkey yesterday, hoping to curb the massacre of Kurdish fighters and civilians in Syria. (If only there was some way to have prevented this, like, a week ago.)

The president said the U.S. would halt negotiations on a $100 billion trade deal with Turkey and raise steel tariffs back up to 50%, in addition to imposing sanctions on three senior Turkish officials (which is going to make them very hard to trade) and Turkey’s defense and energy ministries.

“Turkey must ensure the safety of civilians, including religious and ethnic minorities, and is now, or may be in the future, responsible for the ongoing detention of ISIS terrorists in the region. Unfortunately, Turkey does not appear to be mitigating the humanitarian effects of its invasion.”

Over the weekend, Kurdish forces announced an alliance with the Russia-backed Syrian dictator Bashar al-Assad, in order to fend off Turkish troops.

The president, who responded to the news on Twitter, seemed nonplussed by the development and struck a somewhat (very) different tone to his office’s official statement:

“Let Syria and Assad protect the Kurds and fight Turkey for their own land. I said to my Generals, why should we be fighting for Syria,” tweeted President Trump. “Anyone who wants to assist Syria in protecting the Kurds is good with me, whether it is Russia, China, or Napoleon Bonaparte. I hope they all do great, we are 7,000 miles away!”

Mind Over Matter: Setting the Record Straight on AI

Technology
Author Jim RickardsPosted on 18th May 20185th July 2018
There is no blockchain and there is no such thing as cryptocurrency.”

Technology
Author Shane OrmondPosted on 4th October 20197th October 2019
Disney has banned all advertising from Netflix across its media empire, according to a breaking report by the Wall Street Journal. “People familiar with...

Technology
Author Shane OrmondPosted on 12th July 201915th July 2019
In news-that-surprises-nobody news, Google admitted to allowing employees to listen to your private Google Home audio after a disgruntled employee leaked some of the...