Boris Johnson’s conservative party lost the working majority in the British government today when a member of parliament defected to the opposition. (Also known as “pulling a James Corden.”)

MP Phillip Lee announced this morning he would be leaving the Conservative party to join the anti-Brexit Liberal Democrats. (Which is like leaving the GOP to run a raw kombucha stand.)

In his letter of resignation to Prime Minister and piece of candy floss blowing in the wind Boris Johnson, Lee said the Brexit process had transformed a “once great Party” into a “narrow faction, where an individual’s ‘conservatism’ is measured by how recklessly one wishes to leave the European Union.”

“This Conservative Government is aggressively pursuing a damaging Brexit in unprincipled ways,” Lee wrote. “It is putting lives and livelihoods at risk unnecessarily and it is wantonly endangering the integrity of the United Kingdom.”

“More widely, it is undermining our country’s economy, democracy and role in the world. It is using political manipulation, bullying and lies. And it is doing these things in a deliberate and considered way. It has gone so far beyond reckless as to cease to be conservative.”

Following his announcement, Lee crossed the aisle to join his new party members, in the most exciting piece of British television since Dr. Who convinced the entire planet earth to leave the solar system. 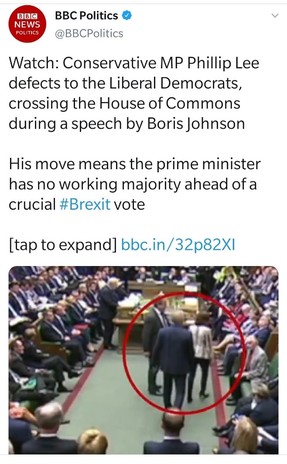 The BBC makes the worst memes.

Without a working majority, the opposition will have a better chance than ever to prevent a no-deal Brexit. As I’m writing this, it’s being announced that MPs will hold a debate tonight on whether lawmakers could block Brexit by seizing the parliamentary agenda.

It’s been four years since Britain voted to leave the EU and it’s no closer to a plan than it was then.

More on this never-ending nightmare as it develops.

The summer box office did its best impression of Uncle Randy’s legendary Labor Day belly flop, with experts blaming everything from Netflix to the global economy to Uncle Randy.

The four-month period between the start of May and Labor Day weekend (or as we in Maryland call it “the Hot Bad Times”) can account for as much as 40% of box office revenue in the U.S. and Canada.

According to media analytics company Comscore, cinemas took in a total of $4.32 billion in this period force-feeding us overpriced popcorn and some of the most generic and uninspired movies ever made. (Shout out to rideshare-app “comedy” Stuber.)

This represents a 2% overall decline from the same period last year (and a 2% increase in taste). But it was the heartfelt story of Mathew McConaughey descending into increasingly weirder roles that took the biggest hit this summer.

The combined ticket sales for the 20 largest art film distributors plummeted 45% in that period. 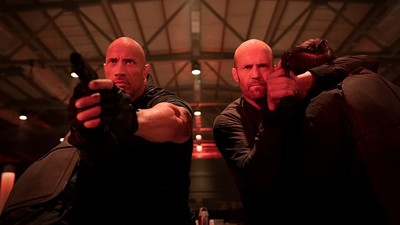 Strong Bald Man & Strong Bald Man was the surprise hit of the summer, with $700 million in global ticket sales and still going strong after its fourth weekend at the top of the charts.

Analysts are pointing the finger at the rising cost of a trip to the theatre, including $20-IMAX tickets, blood-sucking babysitters (what does a teenager need all that money for Tracy?!), and $10 boxes of popcorn that cost about 37 cents to make.

In the past, folks never seemed that bothered about spending a little extra money on the “movie-going experience” (also known as the “I sat in gum and who brings a baby to a Korean horror movie” experience).

But the low cost of streaming platforms puts that once acceptable date-night price tag into sharp relief. Why spend $60 to see a gritty live-action reboot of Dora the Explorer, when you could get six months of Netflix with original movies for the same price?

“It’s all about quality,” senior media analyst for Comscore Paul Dergarabedian told Fortune. “With so many options for entertainment, audiences are becoming more selective. If they’re going to commit money and time to going to the movie theater, whatever they’re seeing better be as good as what they’re able to get at home on their small screen for a monthly subscription.”

Mark Zandi, chief economist at Moody’s Analytics, believes the lethargic summer box office has nothing to do with how big or bald its stars are. According to Zandi, the flagging numbers point to a larger problem: a collapse in consumer confidence.

“It is another sign that the broader economy is in a fragile place,” Zandi, told the New York Times, noting that Disney theme parks and Major League Baseball games also had a soft summer.

“Recreation is, of course, a discretionary purchase, and that it has gone soft reflects greater caution by consumers.”

If true, this would spell disaster for a U.S. economy which depends heavily on consumer spending to offset business investments tanked by Trade War anxiety.

If trade tensions with China have not been resolved when the Bureau of Economic Analysis’s Q3 GDP estimate lands on October 30, we may start backsliding into a recession. (Which is a typically a bad thing.)

Huawei accused the U.S. today of engaging in a broad campaign to disrupt the Chinese telecommunication giant’s global business, including cyberattacks and harassing its employees.

(The Chinese Telecommunication Giant is the title of my new children’s book. He gives kids “free” 5G in exchange for being allowed to read their diary before bedtime.)

According to the fine folks at Huawei (who were spying and meddling in local politics in Africa earlier this month, according to an investigation by the WSJ), U.S. officials have been denying the visas of Huawei employees, detaining shipments, and even “pretending to be Huawei employees” to drum up charges against the company. 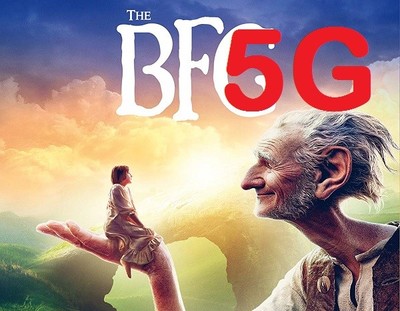 Allegedly, FBI agents have tried to recruit moles inside the company.

In a statement Tuesday, Huawei said U.S. officials are “instructing law enforcement to threaten, menace, coerce, entice and incite both current and former Huawei employees to turn against the company and work for them.”

The telecommunication company also said it’s been hit by a number of cyberattacks orchestrated by U.S. officials. (But it offered no proof of any of the accusations they made this morning.)

Huawei (and its dodgy business practices) has been wrapped up in the U.S.-China trade war from day one. In January, the company was charged with violating U.S. sanctions on Iran and of stealing trade secrets from a U.S. business partner.

According to U.S. officials, this whole “harassment” thing is just part of the 100% legal investigation process and Huawei just ain’t used to being held accountable for its actions.

Vice President and anthropomorphic jar of mayonnaise, Mike Pence, told reporters in Ireland this morning that Huawei is still considered a security threat by the Trump administration.

“It is well known that Chinese law requires Chinese telecom companies to provide Beijing’s vast security apparatus with access to any data that touches their network,” Mr. Pence said.

Central Bankers Are Revving Up the Helicopters

There have been a lot traditional recession indicators flashing in the last few months (that strange red light in my bathroom still won’t turn off).

But the truth is, we’ve never seen an economy like this before. We have no idea exactly when the next recession will hit or what it’ll look like. Like a snowflake, each and every recession is different (a sucky, terrible snowflake).

I reached out to our in-house macroeconomist Graham Summers to find out what the next downturn will look like and how investors can profit from it.

“Helicopter money consists of the Fed printing money and funneling it directly into the economy by either:

“The idea of helicopter money has been floating around economic circles for years, but to my knowledge this is the first time we’ve seen three former central bankers openly calling for it.

“Put simply, these are three HIGHLY connected and influential former central bankers. In this regard, their article can be considered a blueprint for what’s to come as far as central bank policy during the next economic downturn.

“Now, the big question is, ‘how do you profit from this?’

“One simple answer for “buy and hold” investors is: buy gold.”

Gold’s been on a heck of a tear this year. And according to Graham, investing in gold right now is a great way to profit in the long term.

But in the short term, we’re going to see massive volatility in the currency markets. And volatility means big profits if you know what you’re doing.

Was Your iPhone Hacked?

Politics
Author Pieter CranenbroekPosted on 23rd August 2018
With the Brexit deadline looming, a lot of people fear a "no deal" dystopia. Things are not as bad as they look.

Politics
Author David StevensonPosted on 25th July 2019
“Yes, I am invincible!” So boasts Boris, a Russian computer technician in the Goldeneye Bond film, as his fiendish plans start to work out....