The government is reviewing the question of medicinal marijuana, and it wants an answer “as quickly as possible”.

Yesterday the Health Secretary, Jeremy Hunt, backed the use of cannabis oils for medicinal purposes.

Now the government is reviewing the question of medicinal marijuana, and it wants an answer “as quickly as possible”.

I had an inkling this would happen. As I wrote on on the 6th of June , “You might not realise it, but the ball has already started rolling towards full legalisation of cannabis in the UK. In fact, I reckon you’ll see cannabis sold on Oxford Street within five years.”

Why the sudden change? As I wrote on the 6th of June, a couple of things are changing at once. The first is that the public is more accepting of marijuana. The second is that there’s a small marijuana industry in the UK now, growing the plant in giant greenhouses in East Anglia.

The third important change is that scientists are waking up to the power of medicinal marijuana. Jeremy Hunt can’t ignore it any more because it’s more than a simple pain reliever. It’s much, much more powerful than that.

“The single most important medical discovery ever”

How about this for a quote, from Dr David Allen. The discovery of the cannabinoid system is “the single most important medical /scientific discovery ever. And will save more lives than the discovery and application of sterile surgical techniques.”

Until last year, I badly underestimated the power of medicinal cannabis.

I’ve been shocked by what I’ve learned. It turns out cannabis doesn’t just produce a few chemicals, with a few specific applications.

It turns out our bodies have an entire cannabinoid system. The system controls the function of almost every part of our anatomy. And until relatively recently, we didn’t even know it was there.

You see, the cannabis plant produces more than 100 chemicals called cannabinoids. And it turns out that cannabinoids are an essential part of the human body. We produce them naturally.

They’re like keys — keys to locks which are found in different parts of our anatomy. The keys interact with the locks and tell the different parts of the body how to function. And they’re everywhere in the body. They control everything from  pain to appetite, inflammation, brain development, sleep, the immune system, gut health, and a lot more.

The basic idea of medicinal cannabis is that sometimes, the human body doesn’t produce enough cannabinoids (which are called endocannabinoids, because they’re produced endogenously). And that these problems can be fixed with cannabinoids derived from the plant.

Modern scientists only started looking at the medicinal effects of cannabis in the 1980s.

They found an entire system, previously undiscovered, which regulates our internal organs and nervous system.

The endocannabinoid system is made up of receptors which live on the surface of particular types of cells. There are two types of receptors: CB1 and CB2.

CB1 receptors are to be found mainly around the brain and the central nervous system; CB2 are found mostly in peripheral organs, particularly in cells associated with the immune system — see figure 1 below. 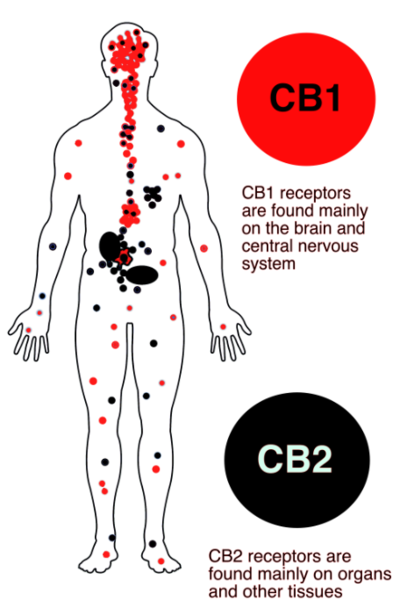 The body produces these endocannabinoids and uses them to send messages to the CB1 and CB2 receptors on the organs and nervous system. Basically, the body uses the chemicals to regulate these systems.

Amazingly, this system is only just coming to light. According to the book Cannabis and Medicine: Assessing the Science Base by the US Institute of Medicine, there’s evidence we first evolved it over 500 million years ago. It’s been with us ever since. And it’s found in many species, from humans to mammals to leeches.

So: the body produces cannabinoids naturally. The cannabinoid system is used to regulate the nervous and immune system. It’s a system we share with lots of other creatures. And it’s been found to influence a wide range of bodily functions, from mood to sleep to fertility. Like a parallel nervous system.

Unsurprisingly, the cannabis plant is a great source of cannabinoids. The most famous cannabinoid is tetrahydrocannabinol (THC), the compound that gets you high. Cannabidiol (CBD) is another major one. It doesn’t get you high, but it’s increasingly widely used for pain relief and as an anti-inflammatory. Up until recently these were the only two I’d heard of. But it turns out there are at least 113 cannabinoids isolated from the plant, 90% of which have no psychoactive effects.

Right now we know very little about the CB1 and CB2 receptors which are found all over our body. We don’t know exactly how they interact. And we don’t know how the 113 cannabinoids in the cannabis plant interact with them. But scientists are racing to find out. According to Todd Harrison of CB1 Capital, a hedge fund, research into this area has exploded in recent years. Right now there are more than 85 clinical trials investigating the effects of cannabinoids on everything from behavioural problems in kids to cancer, to asthma.

Cannabinoids like CBD and THC fit into the CB1 and CB2 receptors in the human body like a lock and key.

Activating the receptors can help prevent inflammation, and help the immune system in other ways. This endocannabinoid system is involved with an incredibly wide range of diseases, because the receptors are found literally all over our bodies. The first ones doctors are investigating are rheumatism and other inflammatory-related diseases, but it extends to cancer and many others. It’s speculated some diseases might be caused by a shortage of naturally produced endocannabinoids — and that cannabinoids derived from the cannabis plant could cure them.

Scientists have found receptors all over our organs and nervous system, and there are 113 cannabinoids derived from the plant. So there’s a lot of potential there. And there have been some enormous early successes.

Cannabis-derived therapies have relieved symptoms of rheumatoid arthritis and multiple sclerosis, it has relieved nausea for chemotherapy patients, and helped with chronic pain. There’s even some evidence they help with post-traumatic stress disorder.

Get ready, because you’re going to be hearing a lot more about marijuana.

The first marijuana millionaires are being minted right now in Canada, which is just about to completely legalise the drug.

In two months’ time, Canadian weed companies will be churning it out by the tonne. They have their eye on overseas markets too, including the UK.

China’s slowing economy is having a devastating impact on the mining sector, says Tom Bulford – something this small-cap miner knows only too well.

Investing
Author Sean KeyesPosted on 21st July 201712th July 2018
My publisher, Darren Hughes, showed up to this month’s team meeting with a glint in his eye.

Investing Stock Market
Author Sean KeyesPosted on 11th November 20165th July 2018
Tiny companies mightn’t matter to the FT, but if you’re an investor they should matter to you.