The practice was stopped decades ago when the species was hunted to the brink of extinction. (Because it’s hard to support a thriving commercial industry on an animal that doesn’t exist anymore.)

For years, the few Japanese whalers that are left have been skirting the rules by hunting whales for “scientific research” and then selling the meat when they get back to Japan. (It’s for my science project, called “Does Whale Taste Good?”)

However, last year, those “brave scientists” only brought home 3,000 tons of whale meat. Which, to be fair, is a lot of whale. But it’s a far cry from the 226,000 tons of meat fished at the peak of the Japanese whale eating craze 57 years ago. 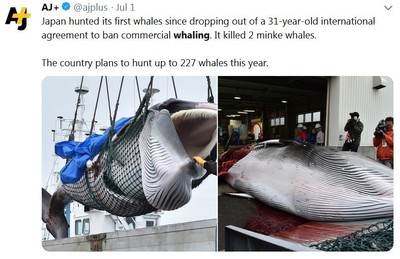 But critics of the decision say that there just isn’t enough demand for whale meat to revitalise the industry.

The flavour of whale (coming to you this Oscar season) is said to be like greasy sea beef. Mostly, it’s favoured by the older generation who ate it almost every day as part of their national school lunch program. (You can laugh, but pizza is legally a vegetable in our schools.)

A spokesperson for Greenpeace Japan says the decision is not good but they’re not super worried right now because whale tastes gross.

“[The whaling industry] may survive on a small scale,” said Hisayo Takada. “But it’s hard to believe whale will ever be a daily meal for Japanese people again.”

Saudi Arabia has restarted the process of taking Saudi Aramco to IPO, according to a breaking report by Bloomberg.

As debutantes go, this state-owned oil giant is a 600-pound gorilla in a ball gown. (And boy, can she dance!)

At time of writing, Aramco is the most profitable company in the world and the largest by revenue.

The company was working with banks for almost two years before it got giant corporation-sized cold feet and put its plan to IPO on hold.

(How does Anonymous Sources keep getting hired at all these high profile jobs? You’d think after these leaks, folks would just stop hiring this guy.)

Even as reports of Aramco’s IPO being delayed were hitting the headlines, Saudi Crown Prince Mohammed bin Salman, the power behind the throne, was saying that the IPO will go ahead as planned in 2020 or 2021. (Then again, he also probably ordered the assassination of Washington Post journalist Jamal Khashoggi and has no problem lying about that.)

By going public, the Saudi Royal family would be giving up the vice-like grip they have on Aramco and its ability to influence global oil prices.

But according to Fortune magazine, the Prince (of whom Lindsay Graham has said he has “no doubt… he ordered the killing of Mr. Khashoggi”) needs the cash to invest in “trendy startups, as well as Saudi projects like recreation concepts, real estate, and planned mega-cities.”

So the biggest IPO in history is probably going to go ahead because the prince wants some new toys.

Mueller will testify before the House Intelligence and Judiciary committees in back-to-back hearings later this month, which will probably be the worst double feature since Battlefield Earth/Stop Or My Mom Will Shoot!

Congressman Soap-in-Mouth will be one of 25 Republicans on the House Intelligence and Judiciary committees who will be grilling Mueller at the back-to-back hearings.

We’ll have more on this story as the circus approaches.

“There once was a man from Dubai…” 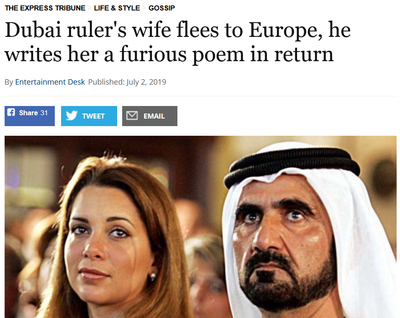 “…Whose wife left without saying goodbye.”

The Real Science behind Exercise in a pill

Almost 40% of U.S. adults are affected by obesity. 30.3 million Americans – 9.4% of the U.S. population – have diabetes. And about one in every four deaths in the U.S. is caused by heart disease.

There’s a proven way to get those numbers down and save the country billions of dollars in the process. But you’re not going to like it. (Most people don’t. And that’s the problem.)

Exercise. (I know. I know. Bear with me here. This is a bigger story than “go for a jog everyone.”)

Exercise has a whole host of health benefits outside of just losing weight.

It lowers the likelihood of metabolic diseases like diabetes, reduces the risk of heart failure, improves mental health, endurance, and there are buckets of unseen benefits.

But what if there was a pill that could replicate all those same benefits?

(Normally this would be your cue to shout “snake oil salesman!” and run for the hills. But this story is about some real-life science that is on the path to change our society entirely.)

Ronald Evans, director of the gene expression laboratory at the Salk Institute for Biological Studies, is working on a pill that mimics the effects produced by exercise by triggering a specific genetic circuit — basically tricking your body into thinking its exercising and producing all the benefits with none of the sweat.

Sedentary mice (never jogged a day in their life) who receive the chemical have much higher endurance than the control group, outlasting them by as much as an hour on the treadmill. (How they get mice to run on a treadmill is a mysterious scientific secret of its own.)

A drug like this could provide an enormous social benefit. But unfortunately the FDA doesn’t recognise the “the inability to exercise” as an illness in need of a drug, so Evans has been unable to secure licensing.

Evans has a backup plan though. Currently, his team is working on using the drug as a treatment for patients with muscular dystrophy. This would allow patients who physically can’t move to enjoy the benefits of exercise and increase their lifespan.

For now, Evans believes this is their best chance of getting licensing for the drug. But once it receives approval it could work as a back door to the preventative market.

The drug is in early human trials right now. So it will be a few years before we see any results. But it’s an extremely promising idea that we are keeping a close eye on.

Grubhub Muscles in on Mum & Pop

Economy
Author Kit WinderPosted on 8th May 20207th May 2020
The best way to solve the climate crisis would be to make all cars incredibly inefficient. If they were heavy, difficult to build, and...

Economy
Author Pieter CranenbroekPosted on 4th February 20165th July 2018
European Council president Donald Tusk shared a draft of the deal that has to keep Britain in the EU. The world went mad over...