Last year was an eventful one in terms of European elections

Last year was an eventful one in terms of European elections.

Investors reacted to fears that a nationalist Trump-style wave of candidates would sweep into office and call for a break-up of the EU.

The euro suffered as a result, and European stock and bond markets were under stress. Yet, that nationalist wave never happened.

Now a new election in Italy threatens to put the euro under stress again and to depress Italian stocks and bonds at least temporarily.

Investors who act now can reap huge gains in the markets due to a new electoral threat emerging.

In 2017, right-wing nationalist parties throughout Europe did show strength and increase their parliamentary representation but were unsuccessful at gaining control of governments in Netherlands, France, and Germany.

A nationalist was elected Chancellor of Austria in December 2017, but his policies have been mostly moderate.

In short, the worst fears of markets about a wave of extremists taking over have not been realised. This has fed into recent strength in the euro and has led to a general sense of complacency about European politics.

Now a new cloud has appeared on the horizon. Italy, the third-largest economy in the Eurozone, is facing national elections this Sunday, on 4 March.

Italian politics are practically synonymous with electoral chaos. Italy has had over 60 governments since the end of the Second World War.

The situation in Italy is even more complicated and opaque than those that arose last year.

The party leading in the polls at the moment is the Five Star Movement founded in 2009, and led by Luigi Di Maio.

Five Star began as an anti-establishment protest party. Di Maio is a college dropout and former waiter who has never held a professional job.

The Five Star Movement is difficult to place on an ideological spectrum.

On the one hand, its eco-friendly and socialist approaches to water and the internet have appeal to traditional left-wing voters and greens.

On the other hand, the party is Eurosceptic, anti-immigration and anti-elite, which has wide appeal to the right-wing and much of the middle class.

While Five Star may win the most seats in the lower house of the Italian parliament (called the Chamber of Deputies), it is unlikely to be able to form a government.

This is because Five Star is expected to get about 30% of the vote, but it has no large coalition partners to put it over the 40% de facto threshold needed to govern effectively.

The centrist Democratic Party, PD, led by former Prime Minister Matteo Renzi is running second in the polls, with about 25% support, but is also far from a majority and is not aligned with another major party in a way that could lead to the formation of a government.

In effect, the two leading parties, Five Star and PD, are ideologically opposed to each other, but have insufficient allies to win.

Most interesting is a right-wing coalition of several parties led by former Prime Minister Silvio Berlusconi and his Forza Italia party. Forza Italia is running third in the polls with about 20% support, well behind Five Star and PD.

But, Forza Italia is in a de facto alliance with several other parties. The largest of these allies is the Northern League, or Lega Nord in Italian, led by Matteo Salvini. Lega Nord has about 15% support.

The parties on the right combined, led by Forza Italia, are showing support at about 40% in the polls. A showing of 40% or above in the election might give the Forza

Italia coalition a chance to form a government.

Forza Italia is a Eurosceptic party but has not stated a firm intention to leave the EU. Lega Nord is firmly anti-EU, and also anti-immigration.

The Forza Italia coalition most closely resembles a

Trump-style party that is hard on immigration, soft on Russia, and sceptical of multilateral institutions.

There are even personal resemblances between Berlusconi and Trump including a flamboyant personal lifestyle (both men were successful entrepreneurs before entering politics; Trump in real estate and Berlusconi in media), and persistent tales of sexual adventures.

Just as Trump’s programme is “America First,” so the Forza Italia coalition programme could be said to be “Italy First.”

A right-wing coalition could shock the markets

With the Italian elections just a few days away what are the prospects for Italian markets and the euro?

The single most factor is the likelihood of continued uncertainty with the prospect of an eventual right-wing coalition enveloping Italian governance like a shroud. 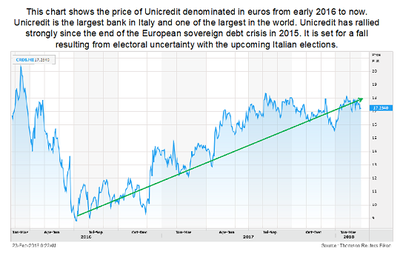 Global elites are holding their collective breath and hoping for a moderate to centrist outcome. But, just as in the case of the US elections in 2016, that may be wishful thinking.

Anti-immigration sentiment in Italy is strong and growing stronger as successive waves of Syrian, Libyan, and refugees from elsewhere come ashore.

A victory for the Forza Italia coalition would be a shock to markets, at least in the short run. Italian stock markets and bond markets would both drawdown. There would also be downward pressure on the euro.

Markets have not fully priced this outcome because mainstream analysts have dismissed the coalition’s chances. That’s a mistake, just as it was with Trump.

One clue to the possibility of a Forza Italia victory not widely reported in the media is that Berlusconi recently met privately with German Chancellor Angela Merkel. This comes in the wake of Merkel’s surprise endorsement of Berlusconi late last year.

We don’t have specific information on what was discussed, but no doubt Merkel was looking for reassurance from Berlusconi that his coalition would not lead an outright attack on the euro or the ECB.

Merkel would not have organised that meeting unless she thought Berlusconi has a legitimate chance at victory. Merkel’s pragmatic approach is based on the “devil you know” theory versus the alternative of a Five Star victory.

Another wild card is the possibility of a grand coalition between Five Star and PD. This combination would easily pass the 50% threshold and could form a strong government.

In the past, Five Star has said it would not enter into a coalition government. This pledge is in keeping with the party’s anti-establishment roots.

However, a chance at actually forming a government under Five Star leader Luigi Di Maio might prove too attractive to pass up.

Five Star’s odd combination of domestic socialism and Italian nationalism on the world stage would be difficult for markets to digest. As always, uncertainty leads to selling as investors head to the side lines until clarity emerges.

For now, the most likely outcome is that no group will form a government and new elections will have to be called in a few months. But, the right-wing Berlusconi coalition could squeak through to victory, which would be a shock to markets.

Even unexpected strength short of victory by Berlusconi could leave Forza Italia in a stronger position for a new election later this year. That outcome would contribute to more market uncertainty, not less.

Any particular wild card outcome may be a long-shot, but the possibility of one wild card turning up is quite high. Market complacency on this score is ill-advised.

Why the Phillips curve could decide your financial future

Economy
Author Kit WinderPosted on 2nd September 2020
From a purely anecdotal standpoint, the housing market seems in dire straits. I only know people who are struggling to fill rooms or flats,...

Economy
Author David StevensonPosted on 15th February 2019
Stress is a much-used word nowadays. But it’s still a very important issue. If the global economy gets seriously stressed, events such as recessions...

Economy
Author Jim RickardsPosted on 7th July 201816th July 2018
The first time I appeared on live television to discuss finance was on 15 August 2007. It was a guest appearance on CNBC’s Squawk Box program...