Iran intelligence says it arrested 17 CIA spies working in military and nuclear facilities and the private sector over the course of the 12 months leading up to March of this year. (I’m starting to think they just arrested a bunch of their own people.)

A top Iranian intelligence official told reporters that: “Sentences for these spies have been issued, some of whom are to be put to death as ‘corruptors on earth’ [a charge punishable by death under Islamic rules in Iran].”

President Trump, who will never pass up for a chance to make headlines with a tweet, hopped on Twitter to dispute the claims: 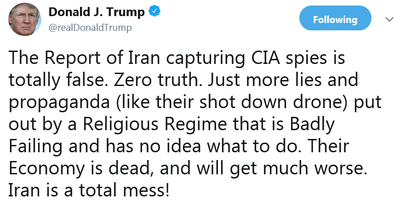 “And their documentary sucks! Probably. I haven’t seen it. But most documentaries suck. So there’s a good chance this one does too.”

The official didn’t say how many of the alleged CIA spies had been sentenced to death. But he did say that they made a documentary about the whole thing and that they would be releasing it today, July 22. (There are easier ways to drum up publicity for your film than kickstarting a war, Iran.)

We’ll have more on this geopolitical headache as it develops. (Trust me, there’ll be more.)

A bipartisan group of lawmakers has introduced a bill to congress (“Bill, this is Congress. Congress, this is Bill.”) that would eliminate several restrictions on marijuana research in the United States.

The bill would allow scientists to buy and study “research-grade” cannabis from private manufacturers. (Or as scientists in the private sector call it, “the kindest of buds.”)

Right now, weed scientists (or “apprentices of the Devil’s Lettuce” as they’re known in the scientific community) are only authorized to test marijuana grown in a federally-authorized facility at the University of Mississippi.

As you can imagine, government-approved mari-huana ain’t exactly high-quality stuff. In fact, according to the researchers, it’s barely weed at all, and closer chemically to hemp. (And you need the good, good weed to do science, say researchers.)

We Stand United (But for Opposite Reasons)

In a twist worthy of a TV show that gets canceled because of allegations of sexual harassment against its star, the bill has support from not just both sides of the aisle, but both side of the legalisation argument.

“At first glance, it may seem like a strange partnership—one of the most vocal critics of the ever-advancing tide of cannabis legalization and one of legalization’s most ardent advocates—co-sponsoring a cannabis bill together,” said Blumenauer and Harris, in a cute little op-ed they co-authored.

“Dig a bit deeper into the debate, however, and our odd couple makes a bit more sense. We may come from different sides of the issue, but we can agree on one thing—the federal government should not stand in the way of legitimate, scientific medical cannabis research.”

Basically, despite their positions, both politicians are saying the debate is kinda pointless without more scientific research. And the only way you’re going to get that is by loosening up those regulations.

“While we may disagree about the medical value of cannabis and the various state efforts to legalize cannabis,” said the entity comprised of Blumenauer and Harris. “It is beyond dispute that the barriers to cannabis research inhibit this nation’s ability to both thoroughly evaluate the benefits and risks associated with increased cannabis use and craft responsible policy governing such use.”

China’s knockoff Nasdaq had a blistering opening day, minting a fresh batch of new Chinese tech billionaires. (They say every time a new stock market opens, a tech billionaire gets his manbun.)

However, analysts predict that this government-fueled high will come with a colossal propaganda-state hangover. (Sorry, I still need to get the drugs terminology out of my system from the last article.)

The Nasdaq-esque Star is part of an effort to bring Chinese tech companies home and give them access to the vast wealth of Chinese investors. 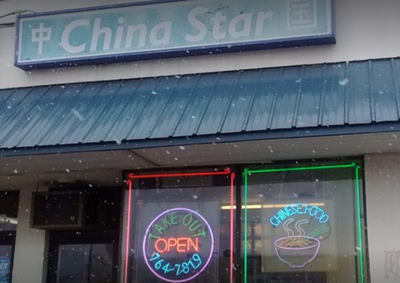 Chinese restaurants in every state have already locked down the #1 spot for “China Star” on Google. This one has 4/5 stars and is just down the road from me.

On average, the 25 stocks that debuted on Star today gained 140%by the time the market closed.

However, analysts say the surge was driven by unrealistic expectations among investors, fueled by state propaganda.

“This [surge] is crazy,” said Ronald Wan, chief executive of Partners Capital International in Hong Kong, according to CNN. “But it’s already overdone. I don’t think such gains can last long. It’s way too speculative.”

China is so desperate to make Star work and bring its major tech companies home, it’s loosening some of its notoriously strict market regulations (“Well, Mrs. China. I do believe you’re trying to seduce me”).

For the first time, companies that are not actually making any money will be allowed to list in China — emulating the U.S. IPO model. (Which has given rise to some of our most annoying billionaires.)

Star enjoyed some major hype on its first day of trading. But expect to see some major corrections in the coming days as investors come to their senses. (Like how everybody thought Jaden Smith was going to be the next big thing but it turned out that all that money and fame had just made him weird.)

The $280k Burger Could Shatter the Farming Industry

Last week, we reported that the plant-based meat industry would grow by 28% a year and reach $85 billion by 2030.

But there’s a new innovation that threatens to disrupt this growing market and upend the American farming industry in the process. (And you bet your bottom burger it’s weirder than any pea-protein burger could ever be.)

Clean meat is not made from plants. Its real meat “produced by the in-vitro cultivation of animal cells.” In essence, lab-grown meat or meat without the animal.

With this technique, you could grow a porterhouse steak in a lab… and there’d be no cow involved. Just the steak.

If folks could get on board with this frankenmeat (and it was affordable/didn’t cause folks to grow a second head), it would upend the American farm industry.

It’s not a new technology. But until now it’s been prohibitively expensive.

Netherlands-based food tech brand Mosa Meat first introduced the world to its lab-grown hamburger in 2013 for the low-low price of $280,000 per patty. (And that’s before you add lettuce and mayo.)

But, according to a Mosa Meat spokesperson that price has come way down in the years since:

“The burger was this expensive in 2013 because back then it was novel science and we were producing at very small scale. Once production is scaled up, we project the cost of producing a hamburger will be around €9 [$10].”

Mosa predicts that its cell-based meat could eventually become more affordable than the price of a traditional hamburger. They would of course. They want to keep their investors.

But there are dozens of companies working to words the same goal as Mosa. And many of them are aiming to hit commercial supermarkets by 2020 or 2021.

Clean meat may be frightening to some, but as we saw this year with Beyond Meat, there’s a market for animal-friendly food products. And we could be looking at a major disruption of one of America’s oldest industries in the next five to ten years.

We’re watching this one closely.

Why the global debt mountain matters to you