Exactly 10 years ago, Newcastle-based lender Northern Rock had to be nationalised

Exactly 10 years ago, Newcastle-based lender Northern Rock had to be nationalised.

It had become inevitable. Public confidence in the bank had evaporated despite state guarantees. Depositors had rushed to extract their cash. The Bank of England had tried to bail it out. Two takeover bids had failed. By 22 February 2008, the liabilities of Northern Rock (then known as Northern Crock) had grown so big that Chancellor Alistair Darling was left with little choice but to take it into public ownership.

It was the first British lender to fail due to a bank ‘run’ for 150 years. The great global financial crisis had firmly arrived in the UK.

Isn’t that all history?

Yes…and no. A decade later, many banks are still suffering. While that applies to Europe much more than to the UK, it could still become a big worry for depositors.

It’s a popular view that when the UK leaves the EU, so will a lot of bank business.

I’ve never really bought into that one.

For one thing, I can’t see the rump of the EU agreeing where its financial centre should be in the post-Brexit era (or indeed, agreeing on much else, for that matter). But there’s a risk of veering into politics here, which I try to avoid.

So I’ll stick to economics.

As Mark Whitehouse notes for Bloomberg, London’s role as a financial centre involves lots of cross-border lending. For example, a French bank’s UK unit might provide credit to a German investment fund or a US bank might make industrial loans in Europe from its British subsidiary. So the level of credit flowing from the UK to other countries is a good gauge of our national influence in global finance.

Since the June 2016 Brexit vote, UK lending was widely forecast to fall. But it hasn’t. Quite the opposite, in fact. Cross-border exposure of UK-based banks grew $155bn from June 2016 to September 2017, says the Bank for International Settlements (BIS).

As a share of GDP, that’s the second-largest gain among European countries behind France and is better than for the US and Japan. A decade after the Northern Rock debacle, it looks like British banks are doing more than OK despite all the ‘Remain’ prophesies of woe.

We’ll watch with interest how this plays out.

Anyway, I’m digressing slightly. I was talking earlier about banking concerns. This time they’re largely in the EU.

I was talking earlier about banking concerns. This time they’re largely in the EU.

Despite the economic recovery since the great financial crisis, European banks had €944bn of so called ‘non-performing loans’ (NPLs) on their balance sheets at the end of Q2 2017, according to European Central Bank (ECB) data.

Different countries assess NPLs in different ways, notes the ECB. But in short, they’re loans where the bank may not get its money back. This map gives you a good idea of where the biggest worries are. 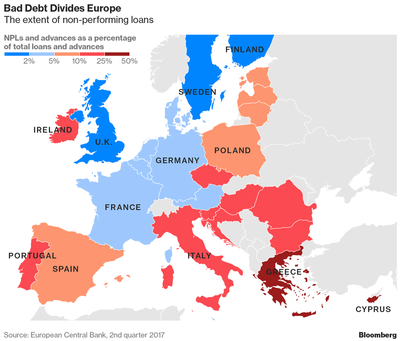 The countries with the largest concerns are those that endured the toughest times in the Eurozone sovereign debt crisis. We’re talking about Greece, which hasn’t yet finished its bailout programme, as well as Italy. Following years of poor or non-existent economic growth, this has the highest absolute level of bad debts and a worse flow of new bad loans than a decade ago.

Again, UK banks have cleaned up their act much better than the rest of the EU.

Sure, Europe has also started to address its bad debts. The Continent’s banks overall have reduced their NPLs by more than €280bn since end-2014. But the ECB admits that soured loans are still “a major problem”.

And here’s the rub.

Two years ago the ECB made a big call. If a European bank went bust, it’d avoid bailing it out with taxpayers’ money (like Northern Rock). Instead, shareholders, bond owners and – if necessary – depositors would pick up the tab via a ‘bail-in’.

“Since then there’s been very little information from the banks or mainstream media to warn individuals and businesses about the risk their deposits are exposed to“, says Mark O’Byrne on Goldcore. “Depositors have been lulled into a false sense of security regarding bail-ins”.

While the Bank of Cyprus has experienced one of these, they’re unknown territory for mainland Europe. We don’t yet know how the general public there would react to losing at least a slice of their deposits if their bank became insolvent.

Not well, I suspect.

At the moment, the European economic situation may look fine. But that could soon change. The time to cleanse NPLs is when everything is going well. That opportunity may have passed. A renewed economic downturn would put extra pressure on those European banks that already have shaky balance sheets. And it could create a whole new set of NPL issues elsewhere.

Surely, though, in Britain we don’t need to worry. Our banks are fine, aren’t they?

In fact, it’s not that simple. Here’s where counterparty risk could kick in.

It’s back to the old story: owe the bank 100,000 and you’re in trouble. Owe the bank 100m and the banks in trouble. If you can’t repay the bank, it can’t meet its obligations to its own creditors. So the whole system could come crashing down.

Even if British banks are doing well now, they might not get their money back from their own borrowers if these hit problems. While UK depositors should still be OK, there can be no cast-iron guarantees. And share prices could take a pounding.

What’s the answer? This is where gold and silver enter the equation. They act as financial insurance against bank bail-ins, insolvent lenders and over-borrowed governments. Indeed, as panic sets in elsewhere, precious metal prices could soar.

And if central banks decide once again to flood the system with funny money – they prefer to call it quantitative easing (QE) – which causes accelerating inflation, rising values of gold and silver will protect you against that as well.

However, before you consider buying gold in particular, I’d suggest clicking here to find out what best-selling author, and gold expert, Jim Rickards, thinks could be the best way to profit from the yellow-metal in 2018.

Where to find the hottest startup companies in Japan

Turkey Will Be Ground Zero in the Next Global Debt Crisis

Economy
Author Sean KeyesPosted on 27th February 20198th March 2019
It’s hard to follow Brexit without my Irish hat on. Because Ireland is both the best argument for leaving Europe, and the best argument...

Economy
Author Jim RickardsPosted on 1st August 20175th July 2018
With the US preparing to confront China and go to war with North Korea, Russia is an indispensable ally for the US.

Economy
Author Pieter CranenbroekPosted on 27th April 20165th July 2018
Companies are curbing employee perks to offset them having to pay the living wage. When it comes to profits, is enough ever enough?