There are three types of Brexit, and each has its pros and cons. Which do you prefer?

Option one is a Soft Brexit. This means everything from staying in the single market, like Norway, to a second referendum and no Brexit.

The benefits of soft Brexit / no Brexit are:

The drawbacks of Soft Brexit are:

Option two is May’s Deal. This is a sort of halfway house. It has some of the benefits of staying in, and lacks some of the drawbacks.

The benefits of May’s deal are:

The drawbacks of May’s deal are:

Option three is No Deal. This is a total break from Europe.

The benefits of No Deal are:

The drawbacks of No Deal are:

Here are the options. May’s deal in green, hard Brexit in red, soft Brexit in blue: 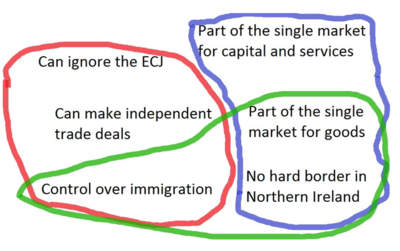 Why isn’t there another option, one where the UK gets more of what it wants? Because that would involve taking things away from the Europeans, and they’re not willing to give them up.

Last week I wrote about the three camps fighting this out.

The first camp is the Prime Minister’s camp of pragmatic Brexiters. It wants option number two, May’s deal, the halfway house. This camp is mostly made of of moderate Tories.

The second camp is the European Research Group of anti-Europe Tories. There’s somewhere between 70 and 100 of them. And they want option three — no-deal. There aren’t  enough of them to pass anything on their own. But they have the power to block other camps from getting a majority. If they play their cards right, they could force no deal by blocking all the other camps’ plans.

The third camp is the soft Brexit / no Brexit camp. They want option one. And it all comes down to them.

They’re not as united as the ERG camp, or even the Prime Minister’s camp. But if they can all be corralled together to vote for one proposal — such as Corbyn’s soft-Brexit deal — they could win the day. There are 300-350 of them.

The problem is that they’re a motley crew of moderate Tories, Labour, Lib Dem, Scottish National Party and The Independent Group. And they have no clear plan, apart from hating no-deal. Some want a people’s vote (and ultimately, no Brexit), others would stomach May’s deal, others want a Norway-style soft Brexit.

Are you still with me? Good. Because it gets even more complicated.

Time for some game theory

So there are three camps. And each camp wants one form of Brexit.

But the key to resolving this is each camp’s second preference.

As the clock runs out, there’ll come a time when one of the three options will become unviable. This could happen because, for example: Bercow won’t allow another vote on May’s deal; or because no-deal is incredibly unpopular with the public; or because there’s not enough time for a second referendum.

And when one of the three options becomes unviable, the camp that supports that option is going to have to support a different option.

And that’s when there could finally be a majority in the house for one of the options.

For example: let’s say Bercow succeeds in stopping May from putting her deal to a vote for a third time.

Now May’s camp would have a decision to make. Their favourite option is off the table. So which do they prefer, of the remaining two options? No deal, or soft Brexit?

Or, if there was a lot of public support for a people’s vote. Would the hardline ERG gang hold their nose and vote for May’s deal? Or would they hang on?

Or, finally, if the clock was running down to the cliff edge, and no deal was looking likely. Would the Soft Brexit gang crack and vote for May’s deal?

The first side to compromise loses.

Manafort Was Colluding… With Airbnb?

Economy
Author David StevensonPosted on 4th April 20185th July 2018
The Bitcoin price is heading south again. I last wrote about Bitcoin in the Daily Reckoning exactly four months ago. Since then the price...

Economy
Author Pieter CranenbroekPosted on 21st February 20175th July 2018
There's been a lot of commotion about Brexit already, and it hasn't even started yet.