As the old saying goes, if you can’t beat ‘em, join ‘em. (And if you can’t join them, just rip off their business model and build an app.)

The world’s largest hotel operator Marriott International (NASDAQ: MAR) is taking a big old bite of humble pie, swallowing its pride, and cooking up its own home-rental platform.

Marriot is the first major hotel company to make a move on the home-rental space. But it was only a matter of time.

Thanks to Airbnb, the home rental sector is now the lodging industry’s hottest segment. (The second hottest segment is hotel rooms with vibrating beds shaped like hearts.)

The hotel industry had been hoping the whole “sleep in some dude’s apartment thing” was just a fad. But as it turns out, folks prefer the privacy and laidback atmosphere of an apartment to a stuffy hotel room with a fridge that charges you $14 for a fun-sized bag of Gummi Bears.

Mini Fridges Are Out, Regular Fridges with Other People’s Food in Them Are In

According to a study conducted at Florida State University, Airbnb’s exponential growth is eating into hotel revenues and driving down occupancy rates and room prices.

The study found that a 1% increase in Airbnb’s supply lowered hotel revenues between 0.02% and 0.04%.

That might not sound like much (because math is hard). But according to the study’s co-author Tarik Dogru, that percentage drop would amount to a single-year loss of $91-365 million in New York City alone, based on the figures for 2016.

Authentically authentic: The study found that travelers felt that Airbnb’s properties were “more authentic” than the clinical experience of staying in a franchised hotel. 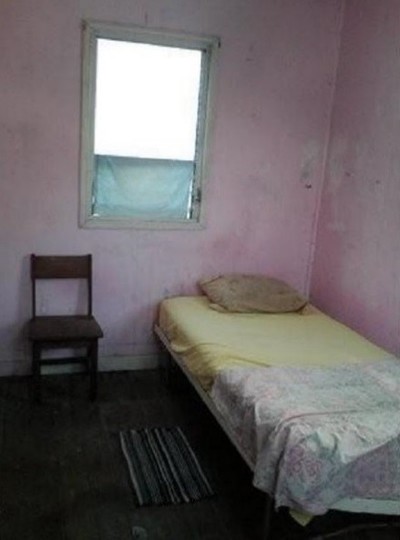 As it turns out, “authentic” and “decorated like a Russian Gulag” are not mutually exclusive.

Of course, Marriott is going to have to abide by the same set of rules that govern all home rentals (which varies wildly state to state depending on how angry Airbnb has made the locals). But according to Professor Dogru, the benefits far outweigh the challenges.

“Airbnb does not ensure the security of guests, it’s not taxed in some jurisdictions, and it has flexibility to add new supply because of a lack of regulation,” Dogru said. “Those are some reasons why Airbnb has a significant competitive advantage against the hotel industry because adding a new hotel to the market can take several years.

That said, Marriott (which owns the W Hotels, Sheraton, and Ritz Carlton brands) will still try and bring some of that hotel-chain polish to the proceedings.

The movie where a bunch of very good-looking people in tight-fitting costumes beat up a giant purple man has shattered box office records and cemented itself in the annals of cinematic history. (It’s basically the Gone with the Wind of its time.)

Avengers: Endgame put some serious butt in seats this opening weekend, with $350 million in domestic sales and $1.2 billion globally. 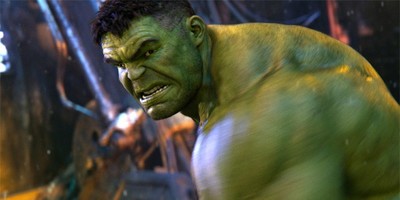 China alone accounted for $330.5 million of ticket sales, proving once and for all that everybody likes to see a hunky dude wearing an American flag on his chest beat up aliens.

It’s all the more impressive considering China is super strict about what western movies can be shown in the country. But over the years, Disney has become a deft hand at getting its movies into theatres.

Disney’s (NYSE: DIS) stock is rocketing towards its best month in 30 years, as investor confidence was bolstered by three hours of superheroes going to town on a big weird alien.

With the help of Marvel’s Kevin Feige, Disney has turned some old superheroes it bought on the cheap into a blockbuster movie franchise unlike the world has ever seen.

Endgame marks a turning point for Disney, bringing an end to the epic story its been building (on and off) for the last decade.

The House of Mouse will keep making Marvel movies, of course. But prepare for some choppy waters ahead as the next generation of heroes is cycled in (and some older characters are relegated to the small screen on Disney’s new Notflix streaming platform).

Before we start this One Last Thing, I want you to do me a favour.

Slip into something more comfortable. Go make yourself a nice cup of tea. Put on some calming ocean sounds.

Take a deep breath and let a wave of calm flow over you.

Okay. Now that you’re nice and relaxed, today’s One Last Thing is about how AMERICANS ARE FREAKING OUT, MAN!!!

According to a Gallup poll, Americans are among the most stressed in the world. And we are more worried and angry than we’ve been in years. (Maybe it’s all those exciting superhero movies.) 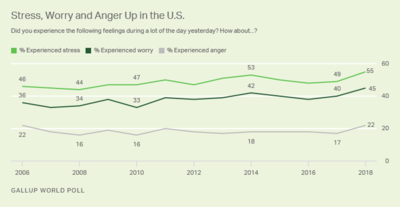 Good lord, Jeremy! This poll is far too exciting. It needs more muted shades of green.” — Guy Who Works at Gallup
Click image to enlarge.

Fifty-five percent of Americans surveyed said they were experiencing stress, beating out the global average by a full 20 percentage points. (USA! USA! USA!)

This places America as the #7 most stressful country in the world — just behind tourism hotspots Sri Lanka (55%), Tanzania (57%), and the #1 most stressful place in the world: Greece (must be all the tzatziki and plate smashing).

Forty-five percent of Americans said they felt worried. Which is higher than last year, but low enough to keep us off the prestigious list of top 10 most worried countries in the world. Topping the charts this year were Mozambique (63%), Chad (61%), and Benin (60%).

Only one in five Americans (22%) said they felt angry a lot. Which seems a little low to be honest. If Twitter and 24-hour news are anything to go by, everybody is 100% angry all the time.

The researchers point out that, despite a strong economy, “the levels of negative emotions in the past several years are even higher than during the U.S. recession years.”

So where’s all this extra stress coming from? Terrorism? Memes? Paper straws?

Well, Gallup doesn’t specifically ask about political affiliation in its world poll. But it did determine:

There was “a strong relationship between stress, worry, and disapproval of the job that President Donald Trump is doing. Those who disapprove of Trump’s job performance are significantly more likely to experience each of these negative emotions than those who do.”

Hoo boy! If y’all are stressed about politics now, just wait until we get into the primaries.

Instead of a graph next year, Gallup will just release pictures of all the folks whose heads exploded from stress.

Economy
Author Sean KeyesPosted on 30th July 20155th July 2018
If you picked up the paper recently, you might’ve noticed that something important is going down in the world of cancer research.

Economy
Author David StevensonPosted on 10th May 201915th May 2019
It’s European election time. Even when the UK was a fully-fledged and at least a semi- willing member of the EU, elections to the...

Economy
Author Jim RickardsPosted on 11th September 20155th July 2018
Markets eagerly awaited the August US employment report that came out on Friday, Sept. 4. This was the last important piece of economic data...