Tim Sloan, evidently, does not.

Just moments after receiving a glowing seal of approval from Buffett on CNBC, Sloan, unceremoniously and suddenly, stepped down as CEO of Wells Fargo.

The news comes just a few weeks after Sloan testified before the House Financial Services Committee, where he took a bipartisan smackdown from lawmakers on both sides of the aisle.

Sloan replaced John Stumpf in 2016, who retired in shame during the Wells Fargo account fraud scandal. (I say “in shame” because it was a shameful thing he did. I have no idea if Stumpf can feel shame.)

In an interview at the HandUp for Success Luncheon in Grapevine, Texas, Buffett told CNBC’s Becky Quick that he had “100%” confidence in Tim Sloan. He added, “I don’t want his job.”

Well, I guess someone did. Because less than two hours later, Sloan stepped down.

But while one Warren was singing Sloan’s praises yesterday, another was busy dunking on him on Twitter. 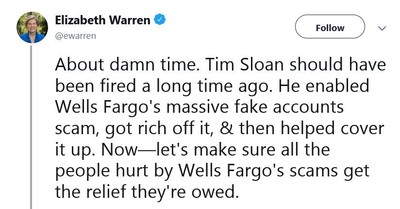 I miss the days when I didn’t know what every politician’s opinion on everything was.

“By the way, getting fired shouldn’t be the end of the story for Tim Sloan,” Warren continued in a secondary tweet. “He shouldn’t get a golden parachute. He should be investigated by the SEC and the DOJ for his role in all the Wells Fargo scams. And if he’s guilty of any crimes, he should be put in jail like anyone else.”

Senior Vice President C. Allen Parker will assume the position of interim CEO until a new candidate is selected.

(Incidentally, if you click on Tim Sloan’s bio page on the Wells Fargo website it already redirects to Parker’s bio.)

Would you jump in my grave as quickly, Parker?

Do you find the timing of Sloan’s resignation suspicious? Was he fighting an uphill battle trying to fix the Wells Fargo train wreck?

What Are We Missing About the Uber IPO?

Lyft (NASDAQ: LYFT) shares popped 21% as it began its first day of trading as a public company.

The festivities kicked off a little before noon today with a starting stock price of $87.24, up $15.24 from the $72 per share price point Lyft set last night.

As one of the first major gig economy apps to IPO (narrowly beating out that app that tells you when to pee during movies), there’s a lot of buzz surrounding Lyft.

But Lyft (and the butt load of other companies going to IPO this year) might not the golden goose you think it may be.

As Aaron Gentzler, editor of the Rundown writes, it’s important to remember that Facebook and Alphabet were outliers:

Lyft and other companies that’ll soon IPO aren’t yet profitable.

And while investors point to the geniuses who bought Facebook or Alphabet (Google) stock early, both companies were actually making money before they went public. Not to mention, Facebook took investors on a wild ride in its early days as a publicly traded company.

All that to say, if you’re thinking about doubling down on Lyft or any other profitless IPO, just envision the dead eyes of the Pets.com sock puppet staring back at you.

(Thanks for the horrific vision, Aaron. I guess I won’t be sleeping tonight.)

In fact, Lyft isn’t just “not profitable.” It has the distinction of holding the highest net loss of any IPO in history. During the IPO filing, LYFT was forced to disclose that.

Shouldn’t There be a Brexit Right Now?

After years of oppression from the tyrannical European Union, the mighty United Kingdom is finally free.

Borders will be closed! Trade shall be free! And everyone in the country gets a second little biscuit with their afternoon tea!

That was the plan, at least.

More than 1,000 days have passed since Britain voted to leave the EU. But we’re no closer to an exit plan now than we were then.

Where did it all go wrong?

Britain voted to leave the European Union with 51.9% of the vote. But as the consequences of Brexit became clear in the aftermath, the general perception changed.

Some of the highlights:

Last week, a petition to revoke Article 50 (Brexit) and return to the EU was circulated and it chalked up 5.75 million signatures in just a few short days.

The government responded that it “acknowledges the considerable number of people” who signed it. But revoking Article 50 would “break the promises” made to voters, it said.

Independence Day: Brexit supporters were calling this date their “Independence Day.” Which is ironic considering, on average, a country celebrates its independence from the British Empire every day of the year.

Meanwhile, the government is so hell-bent on “keeping its promise” that it’s ground completely to a halt. Political infighting has grown so bad that the Queen had to step in and tell lawmakers to cut out their bitching.

When asked about the prospect of a deal today, one lawmaker was quoted on live television last night as saying: “F$@k knows. I’m past caring. It’s like the living dead in here.”

You May Be Wrong

Prime Minister Theresa May has brought multiple Brexit deals before Parliament, all of which have been defeated on the floor.

This week May reached the end of her rope, saying she promised to resign if parliament would just vote Brexit through.

May put that one final deal before Parliament today. But as I’m writing this, it’s being reported that it was defeated by 344 votes to 286, a margin of 58 votes.

In response, the sterling fell below 1.30 versus the dollar, after trading above $1.310 for much of the session.

As the vote was announced, the European Council President Donald Tusk tweeted that an emergency meeting would be held to discuss the results. (Is this really how we get our news now? The same place where people are throwing slices of cheese on their dogs?)

Is Britain getting it’s just desserts? Should we reverse the brexit decision? Are we only hurting our own economy and people?

The End of Social Security

Yesterday, we talked a little about America’s impending retirement crisis.

10,000 boomers are retiring every day. And without enough savings to get them through retirement, they are putting enormous strain on the Social Security system.

You see, Social Security was never intended to replace retirement savings. (Not on this scale at least.)

Social Security was meant to supplement savings, investments, provide a financial cushion and, in some cases, be stolen by your loved ones who continue to cash it in long after you’ve passed.

Unfortunately, the reality is that many folks are entering retirement with little-to-no savings… and their Social Security is making up the vast majority of their income.

It’s tough to nail down the exact figures because the government sucks at tracking stuff like this. But the Social Security Administration estimates that 21% of married couples and 43% of single seniors rely on Social Security for 90% or more of their income.

And with more than 10,000 baby boomers retiring every day, that number is growing constantly (as are Amazon sales of the M*A*S*H complete series boxed set).

Many of these folks, who overestimated their financial security, are having to endure a major downshift in lifestyle just to survive.

For some who come from middle-class backgrounds, this is their first time being “poor” in their entire lives.

The worst part is… if these folks could have held onto the money they were paying into Social Security and invested it themselves, they could have been much better off today.

According to D.C.-based think tank the Heritage Foundation, “Taking an average of all 50 states and the District of Columbia, the average worker receives significantly less from Social Security than he would have if he had conservatively invested his Social Security payroll taxes in the market.”

But this all pales in comparison to the crisis on the horizon.

Social Security is running out of money.

Yup. I know that sounds insane. But it’s true.

The system only works if there’s more money going into Social Security than dollars being paid out. (Obviously. The money has to come from somewhere.)

And, for a while, the grand social security experiment worked.

In 1960, 5.1 people were paying into SS for every person drawing benefits. But over time that number has dropped significantly.

In 2005, that number dropped to 3.3 per beneficiary… and it’s dropping more and more every year.

By 2010, Social Security was paying out more than it took in. They made up the difference by tapping into a government trust fund. But if we keep draining Social Security at this rate, experts estimate the fund will run out by 2034.

At that point, the government has two choices. Either slash Social Security by 21%. Or increase payroll taxes by 31%.

Either way… the American people lose.

For a while now, my research team has been looking into ways to boost your retirement savings fast. And they think they may have found a solution. More on that next week.

Don’t get caught behind the curve

Economy
Author Pieter CranenbroekPosted on 5th November 20155th July 2018
David Cameron is in quite a pickle. After his renegotiation the prime minister is supposed to back the ‘in’ campaign, but his diplomacy in...

Economy
Author Jim RickardsPosted on 23rd January 20185th July 2018
The Roman Republic and the later Roman Empire had gold coins called the aureus and solidus, but they also minted a popular silver coin...

Economy
Author Kit WinderPosted on 13th May 202013th May 2020
An apology. If you found Monday’s piece a little hard to understand in places – that’s probably because I made quite an annoying and fundamental error of definition. I...

Economy
Author Kit WinderPosted on 11th May 2020
I like challenging widely held assumptions. That’s how you can outperform anyway, or at least, differentiate. It’s also much nicer to try and think differently. Today I want to...
Load More