A family-owned company in Britain is operating a global network of businesses hiding money for fraudsters, criminals, and ultra-rich assholes, according to a massive treasure trove of data leaked to media. (THAT’S RIGHT. WE GOTTA ANOTHER LEAK FOLKS!)

The #29Leaks contain 15 years of documents, data, and phone records from the London-based company/fraud mill Formations House. (Don’t you love it when criminals meticulously document their crimes?)

Journalists first got their grubby little muckrakers on the leaks back in July. But it’s taken this long to even make a dent in the more than 100GB of data.

According to the leak, this adorable little family-run business operates as a one-stop-shop for fraud, money laundering, and tax evasion (which is very convenient if you’re into that sort of thing).

The company’s illustrious clients included such prestigious figures as an African dictator, a fake Gambian bank, a Hell’s Angels boss, the Italian mob, and no this is not the setup to a joke.

And that’s only the tip of the griftberg. Over the years, Formation House has churned out more than 400,000 companies for grifters, fraudsters, and organised criminals around the globe.

“In only a matter of days, a client could purchase offshore companies bundled into packages touting minimal compliance requirements, tax-free operations, and anonymity for directors and shareholders,” said Burkhart Pursuance Project Outreach Director Annalise Burkhart, who led the global collective of journalists in the investigation.

Basically, if you have a fun and very illegal racket going on, Formations House wants in. (Hey, if you need to create a shadow corporation or autonomous financial region in your backyard, I would definitely give ‘em a call. They are still open for business.)

Oh yeah, I almost forgot the best part. Now we now know exactly how Iran has been sidestepping U.S. sanctions to sell its oil.

According to the #29Leaks (we need a better name for this. its fine but it’s no “Panama Papers,” that’s for sure), Iran’s national oil company NICO hopscotches across the globe from tax-haven to tax-haven.

With the help of its Swiss partner-firm, Naftiran Intertrade Co (Sàrl), NICO has repeatedly switched homes for more than a decade, attempting to circumvent international sanctions aimed at halting Iran’s development of nuclear weapons (because the last thing we need is more assholes with nukes).

The documents pull back the curtain on a network of accountants and lawyers (most of whom were from Pakistan but operating under hilariously British fakes names) who helped Iranian oil interests set up tax havens and sell their oily wares secretly.

From this leak, we can see how fun, regulatory loopholes can leave the global financial system vulnerable to fraud, money laundering, corruption, and general tomfoolery.

The top Democrat on the Senate Finance Committee, Oregon’s Ron Wyden, went as far as to call for an end to anonymous shell companies in a statement on the Formations House leak:

“Ending anonymous shell companies would make it easier for law enforcement to ‘follow the money’ when investigating complex financial crimes like sanctions evasion.”

Reporters from more than 20 outlets in 18 countries have been slowly trawling through the documents for notable stories. But they’ve barely scratched the surface yet.

We’ll likely be hearing more from the #29leaks in the coming months. I’ve got a gentlemen’s bet with myself that at least one major celebrity, political leader, and a children’s entertainer is in there. (If I’m right, y’all can buy me dinner.)

Investors Have No Idea What’s Going On

The markets wobbled this morning as investors tried to parse the mixed messages coming from the Trump administration and Chinese officials regarding a possible resolution to the never-ending trade war. (“They’re either about to make a deal or get a divorce.”)

China’s Commerce Ministry indicated this morning that negotiations were progressing amicably and a phase-one deal could be reached any day now.

President Trump, who may be a different person from the President Trump at the start of the week, seemed to back up their statement, saying negotiations were going “very well.”

The markets rose briefly as investors got their adorable little hopes up. But then the cold hard reality of the situation set in and everyone remembered all the other stuff that’s been going on this week.

Tensions between the U.S. and China have been high ever since President Trump signed a bill supporting the pro-democracy protestors in Hong Kong and condemning humans rights violations in China’s western region of Xinjiang.

This was particularly upsetting to China because it legitimises the Hong Kong movement and makes it harder to murder people they don’t like and harvest their organs.

The Chinese state-run media outlet and hilariously-named Global Times said that China would retaliate by publishing an “unreliable entity list,” which would lead to sanctions against U.S. companies, organisations, and individuals. (And if any reader could somehow get me on that list, I would be so very jazzed.)

Global Times sounds like either a newspaper from a Superman comic or a state-run media outlet desperately attempting to appear impartial.

Earlier this week, at the NATO summit in London, President Trump said we might not get a resolution to the trade war until after the 2020 election (or the end of time itself or whatever).

So you can understand investors’ skepticism in the face of reports that everything is going great, please don’t look behind the curtain, Dorothy.

The entire nation of France ground to a halt today, as every Theo, Denis, and Hugo decided to light flares and knock over trash cans instead of going to work today.

Public transport was at a standstill nationwide, as an estimated 500,000 people walked out in protest of President Macron’s attempt to modernise the French pension system (“at 64, everyone gets a jetpack!”).

Macron (essentially a shorter version of Justin Trudeau without the blackface) wants to combine France’s 42 different retirement plans into one universal system.

The little president sees it as a way to tidy up a messy and complicated system. But civil servants and unions are protesting the change, saying that most folks will end up working longer for less benefits under the new system.

Or as the French would call it: la farce. (Translation: a farce.)

Hundreds of flights in and out of the country were canceled today, while trains and buses slept soundly in their little caves. Museums and schools were also closed (as well as pretty much everything in the entire country) as teachers, students, lawyers, and air-traffic controllers joined the protest.

This fresh bout of social unrest comes just months after the end of the yellow vest crisis, which ended after the movement devolved into infighting, anti-Semitism (why is it always anti-Semitism with people?), and a general sense of “what the heck are we doing here?”

This is the largest worker’s protest in France in decades. But the photos of tear-gas engulfed streets and police in riot gear could have been taken in any number of distressed countries around the world in 2019. (Although admittedly, France’s tear-gas covered streets are very picturesque.)

In Iran, police have started gunning down protestors in the streets and sending bills for the bullets to the relatives of the dead (I wish this was a joke). It’s estimated anywhere up to 400 protestors are dead so far, though it’s hard to get a proper count due to a government crackdown on media reporting on the protests.

It’s clear that the people of the world are restless. And this is far from over.

A Hot Cup of Doom, Hold the Gloom

You know, we report on a lot of doom & gloom here.

It’s just the nature of the making money game, you know? Knowing what’s going on in the markets is half the battle.

But what I like about Graham Summers is that he can bring the doom without the gloom.

Sure, we’re all doomed, says Graham. But even doom has its opportunities for making money. For example, Graham says the Fed is driving us towards an inevitable crisis… but a lot of people are going to make a lot of money before then.

I think Graham can probably explain it best. So I asked him to swing by the OLT HQ and lay it out for y’all.

Well, Shane. The fact is the Fed is being forced to engage in endless interventions. And the worst part is that the Fed did this to itself.

It’s an unpopular opinion, but the reality is that following the 2008 Crisis, the Fed eased monetary conditions for FAR too long.

The Fed did all of this for SEVEN years (from 2008-2015) – even though there was clear evidence that it could have started normalising policy as early as 2011/2012.
The end result?

The financial system is now addicted to Fed interventions. Put another way, the Fed can never stop intervening without inducing a crisis.

And if you think that’s an extreme statement, consider the last time the Fed attempted to normalise policy. The corporate debt market began to freeze and stocks collapsed over 20%, entering a nosedive that would have very quickly become a full-scale crash. 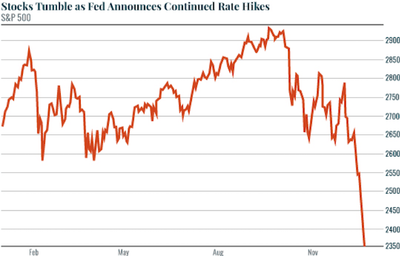 Again, the Fed is trapped. It now has no choice but to intervene in the markets on a daily basis.

And we’re not talking about small interventions either. The Fed has an overnight repo program through which it provides $120 billion to the financial system every single night.

(For simplicity’s sake, repo operations occur when banks do not have the required levels of liquidity. They can “park” some of their less liquid assets with the Fed in exchange for cash, thereby increasing their liquidity.)

This is running at the same as the Fed’s $45 billion term repo program AND its monthly QE program of $60 billion.

The Last Bull Market of Our Lifetimes

All of these interventions mean that we have a final chance to get REALLY wealthy from the stock market before the next bear market hits.

As I keep stating, I fully believe we are in the LAST bull market of our lifetimes. 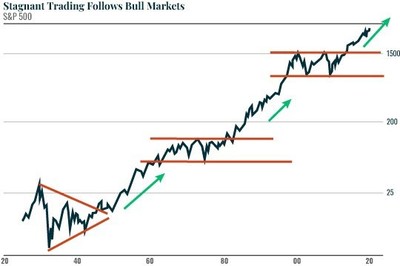 As you can see, there have been THREE bull markets in the last 100 years (identified with green arrows):

It is important to note that EVERY bull market has ended with a bear market/consolidation period during which stocks went nowhere for DECADES (minimum 15 years).

THIS is why the Fed is intervening so aggressively in the markets. And it’s why you NEED to take advantage of this bull market to ensure you can retire rich with your financial future intact.

Economy
Author Sean KeyesPosted on 15th January 20165th July 2018
There’s a simple explanation for what’s been going on with the Chinese economy lately. China is suffering the effects of tighter monetary policy.