In spoo-oo-oo-ooky economy news, the Fed doesn’t know its ass from its elbow and we’re all screw-ew-ew-ewed.

That’s according to Michael Pento of Pento Portfolio Strategies who gave a pretty grim assessment of the current climate in an interview on USAWatchdog.com.

Later the Fed is expected to cut its benchmark interest rate by 25 basis points for the third time in three months. The Fed has said it’s not engaging in quantitative easing (QE), it’s just “fine-tuning” the economy.

But Pento is calling B.S.

“It’s not that it’s QE. It’s QE on steroids,” he said. “Everybody knows that this QE is permanent just like any banana republic would do, or has done.”

(Note: A banana republic, in this case, refers to a country operated as a commercial enterprise for the profit of the ruling class. It also means a small country whose entire economy depends on exporting bananas… but that’s probably not what Pento’s referring to.)

Pento argues, if the Fed stops juicing the economy with its economy steroids, the U.S. will slide into a flow-blown Depression.

“That’s why the Fed’s panicking,” he said. “If anybody still believes they’re omniscient or omnipotent or know their butt from their elbow, that’s over.”

“When this thing implodes, we are all screwed. On a global scale, we have never before created such a magnificent bubble. These central bankers are clueless, and they have proven that beyond a doubt. All they can do is to try to keep the bubble going.”

Big tech is spending record amounts of money on lobbying Washington, as lawmakers suddenly realise the entire internet is controlled by four guys.

Facebook, Amazon, Apple, and Microsoft jacked up their spending in the first nine months of 2019, according to disclosures filed with the federal government. (And the checks were just signed to “anyone but Elizabeth Warren.”)

Reportedly, Amazon spent $12.4 million, representing a 16% increase from 2018, begging Congress to “just go away for a few more years so we can really get this monopoly going, please.”

Unsurprisingly, the company which is owned by the richest man in the world (Jedd Berbos, I think?) spent more money than any company lobbying Washington this year, with Facebook coming in a close second.

Mark Zuckerberg’s Drunk Photo Aggregator increased spending by 25% this year, as part of an ongoing campaign to “make everything go back to the way it used to be, so Mark doesn’t have to go outside anymore.”

Meanwhile, Microsoft and Apple (who are substantially less intimidating without their cutthroat founders at the helm) boosted spending on greasy dudes in Washington by 9% and 8% respectively.

A history of lobbying: One of the earliest instances of lobbying in the U.S. involved gunmaker Samuel Colt who paid lobbyists to pass out pistols as gifts to lawmakers and to one member’s 12-year-old son. (Which is totally fine because kids tended not to survive until adulthood in those days anyway.)

For its part, Google actually spent less on lobbying Washington.

What’s got Big Tech Reaching for Its Big Wallet?

The increase in spending coincides with the government suddenly realising that these companies exist and control almost 80% of the internet.

The FTC has opened a probe into Amazon’s market power. The House Judiciary Committee is conducting a broad antitrust investigation into Apple, Facebook, Amazon, and Google.

Meanwhile, Facebook is facing antitrust investigations from the FTC, the Justice Department, almost every state attorney general in the country, and me and a couple of mom’s who do detective work out of the back of a Vietnamese nail salon in our spare time.

This is probably why one of the Mark Zuckerberg clones seems to have taken up residence in Washington for the time being, making three official appearances on the Hill in just five weeks.

“I’m not sure whether Mr. Zuckerberg has bought an apartment here yet or not, but he is certainly spending much, much more time and not just him,” Rep. Bill Huizenga (R., Mich.) told the Wall Street Journal. “They were behind the curve in getting out talking to policy makers.”

Beyond Shares Plummet After Sizzling Performance in Q3

Shares of frankenburger flipper Beyond Meat (BYND) plunged 20% today, despite an earnings report any crazed Transylvanian scientist would be proud of.

Sales of not-sausage and what-beef grew in restaurants and stores across the USA, as consumers happily reported no extra eyes or fingers growing on their person after consumption.

Not a bad Q3 for a bunch of folks selling bleeding yellow-pea protein. So why the stock plunge? 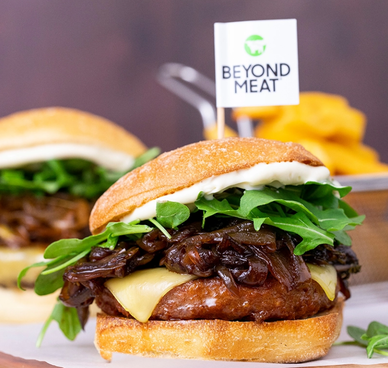 The only acceptable toppings for a burger are cheese, pickle, onion, and mayo. Anything else and you’re just eating a salad.

With the stock’s lockout period coming to an end today, 75% to 80% of Beyond’s shares will be eligible for trading on the stock market.

This is the first day insiders who snapped up pre-IPO shares can sell their stock. So predictably, investors, anticipating a wave of insider selling, started a wave of outsider selling, plunging the stock 20% to about $85.

The folks over on Wall Street are still bullish on the stock, with many analysts predicting Beyond will recover from this wobble as long as company insiders don’t sell all their stock at once.

“Much depends on the amount of selling pressure over the next few days,” said J.P. Morgan’s Ken Goldman in a note to clients.

“Putting the lockup expiry in the past ultimately should incent some investors to start buying the stock again, though the shares could fade lower beforehand.”

Beyond Meat CEO Ethan Brown, who’s definitely wondered if his veggie burgers would taste better if they could feel pain as well as bleed, said he’s not touching his stock but it’s up to his employees if they want to sell or not.

“For employees its certainty around their person circumstances that they have, if they just need liquidity,” said Brown on CNBC’s terribly named Squawk Box. “I think the early investors its the investor mandate, what does their firm require them to do?”

Lawyer: The President Should Be Allowed to Kill a Guy

Attorneys representing President Trump say he should be able to kill a guy in broad daylight and get away with it, according to a new report by the Wall Street Journal. (He hasn’t. But the argument is, if he did, it would be fine. Don’t worry about it.)

According to court documents and filings made by Trump’s own legal team, the president’s attorneys have repeatedly fought to grant the president immunity from “civil lawsuits, judicial orders, criminal investigations [and] congressional probes.”

Last week, President Trump’s personal attorney and casual fan of murder William Consovoy argued before a New York federal court that a sitting president cannot be investigated for any crime while in office.

The judge then asked if that included shooting someone on Fifth Avenue, referencing a joke the president made on the campaign trail that he “could stand in the middle of Fifth Avenue and shoot somebody and wouldn’t lose any voters, okay?”

“That’s correct,” said Consovoy, who probably should have thought about that one a little longer.

New York Mayor and definitely not the next president Bill de Blasio told reporters that they probably would go ahead and arrest President Trump if he shot somebody on Fifth Ave. (Again. This is all hypothetical. As far as I know, President Trump has not gone on a shooting spree outside the Met and this is all a fun exercise in what-ifs.)

“If anybody shoots someone, they get arrested,” told reporters. “I don’t care if they’re the President of the United States or anybody else. If you shoot someone, you should get arrested, and we would arrest him.”

There is some precedent for U.S. presidents fighting for immunity and exceptional privileges in the courts. Nixon, Clinton, and Bush Jr. all fought numerous legal battles to protect their interests while serving as president, with varying degrees of success.

Why Elites Are Winning the War on Cash

This One Technique Can Double Your Personal Power

Economy
Author Jim RickardsPosted on 11th September 20155th July 2018
Markets eagerly awaited the August US employment report that came out on Friday, Sept. 4. This was the last important piece of economic data...
Economy
Author Kit WinderPosted on 5th May 20215th May 2021
Inflation is coming, and so is the energy transition. The last time any of us witnessed real, headline price inflation was in the 1970s....
Economy
Author Kit WinderPosted on 15th February 2021
Traditionally, every man and his dog has bought into the idea of the 60/40 portfolio. 60% bonds, 40% equities. This structure has been peddled...