The S&P 500 soared like a majestic eagle stuffed with the financials of 500 U.S. companies after a not terrible weekend of trade negotiations with the Chinese.

The DJIA rose 205.90 points at the opening bell, while the Nasdaq Composite gained 139.61 points.

The surge was led by tech stocks which rallied on news of a thaw in trade relations between the U.S. and China. (Apparently, all we had to do was leave trade relations on a plate in the sink overnight.)

U.S. President Trump met with Chinese President Ji Xinping at the G20 summit in Osaka, Japan this weekend. After an hour-long discussion, the boys were able to put their differences aside and agree to hit the reset button on trade negotiations.

In a Sunday interview with human-bowtie-rack Tucker Carlson, President Trump said: “We had a very good meeting. He wants to make a deal. I want to make a deal. Very big deal, probably, I guess you’d say the largest deal ever made of any kind, not only trade.”

Until the talks are resolved, the tariffs already in place will remain. However, the White House will not be going ahead with additional tariffs of 25% on $300 billion in goods.

In return, Trump said, China agreed to buy a “tremendous amount” of American agricultural products. “We will give them a list of things we want them to buy.”

Grubhub Muscles in on Mum & Pop

Grubhub is buying up thousands of web addresses for mum-and-pop businesses and… (I can’t legally say they’re squatting on them. But, you know. WINK).

According to a report by Newfoodeconomy.org, the always-soggy-food-delivery app has bought more than 23,000 web domains, all relating to independent restaurants that use its delivery service.

In many cases, Grubhub has built shadow websites on these domains that compete directly with the restaurant’s own website. 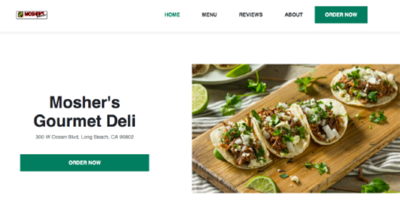 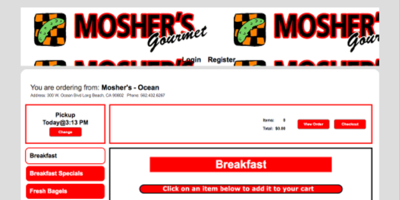 On the top is a Grubhub clone site. On the bottom is the business’s real site. (You can tell from all the terrible design choices.)

But when you try to order that weird thing you’re too ashamed to order in person, you’ll be redirected to the restaurant’s page on Grubhub.

Now, who cares if folks are buying through Grubhub or directly from the business? Isn’t the restaurant making money regardless?

No. (Or as they might say in an authentic Italian restaurant listed on Grubhub, “no.”)

According to an anonymous restaurant owner interviewed by Newfoodeconomy.org, restaurants end up with an estimated 30% less after Grubhub takes its share of the profits and adds marketing fees and additional promotion costs.

Despite processing a higher than average amount of orders, this restaurant owner said she has trouble making ends meet at the end of the month after she pays Grubhub.

“It’s putting us in a financial hole. Last month, I paid [$8,000] to GrubHub. That’s my rent for the month,” she told Newfoodeconomy.org.

Grubhub has since responded, saying it creates these “microsites” to “increase their online brand presence.” But in many cases, these websites are competing directly with the restaurant’s real (and always mind-bogglingly tacky) website.

With the full weight of Grubhub’s marketing machine behind them, you’re more likely to stumble across Grubhub’s website first even if you search for the restaurant directly (which banks them a fat “advertising commission”).

In its statement, Grubhub said it’s the company’s policy to release these domains to restaurants if asked. But that glosses over the fact that it created these shadow sites without folks’ permission and many operate without the restaurant owners’ knowledge.

As Stacy Mitchell, co-director of the Institute for Local Self Reliance, told Newfoodeconomy.org: “You have Grubhub coming in and inserting itself between a restaurant and a customer in a way that, obviously, isn’t chosen by the restaurant and isn’t to the restaurant’s benefit.‘

“I just feel like this is a sort of pattern — whether it’s the way in which Uber and Lyft have reoriented the taxi service so they’ve basically positioned themselves as a gatekeeper and compelled everybody to operate in their system, and thereby get to take a large chunk of the revenue when they’re adding very little value compared to how much they take.”

What do you think? Is this a symptom of a larger problem with how the gig economy treats small business? Or should Grubhub be entitled to chase that paper as long as its funneling business to restaurants?

Donald Trump made history yesterday, becoming the first sitting U.S. president to visit North Korea. (Well, it was more of a “pop by” than a full-blown visit. But still, historic.)

President Trump stepped into North Korea at the border of the demilitarised zone and hung out with North Korean dictator Kim Jong-un for about 45 minutes. 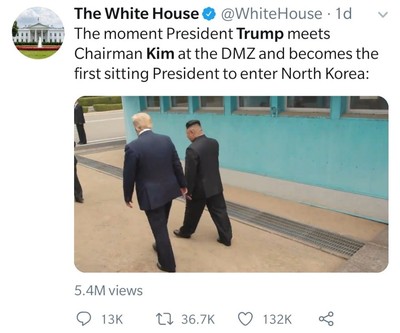 “Have you seen Endgame?”

Through an interpreter, Kim told Mr. Trump: “I never expected to meet you in this place.” (Do you come to the demilitarised zone often?)

Back inside the Freedom House (which, I was disappointed to learn on my trip to the DMZ, is not an American-themed restaurant), President Trump told journalists that Kim had agreed to restart negotiations with the U.S. and work towards the full denuclearisation of the Korean peninsula. (But like, chill. We’ll get to it eventually.)

“Speed is not the object,” said President Trump. “We want to see if we can do a really comprehensive, good deal. This was a great day. This was a very legendary, very historic day… It’ll be even more historic if something comes up, something very important.”

During his brief visit, President Trump extended an invitation to Kim to visit the White House if he happened to be in the neighbourhood. (Which is only the polite thing to do when someone invites you into their isolated nation of exile.) 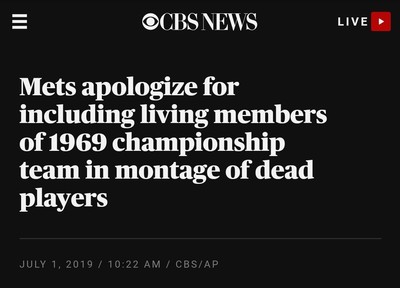 According to economist Jim Rickards’s mathematical model, President Trump has a 65% probability of winning the 2020 election.

But DoubleLine Capital CEO Jeffrey Gundlach (AKA “The King of Bonds”) says that Trump might not even run.

In an interview with Fox Business, Gundlach said that Trump will win a second term as long as the economy remains healthy. But if there’s a recession between now and then, a campaign would just be a waste of money.

“I am not even sure he’s going to really run,” he told Fox Business’s Neil Cavuto. “If the economy goes into recession and he can’t pull out by removing the tariffs, there’s very little for him to run on.

“Lyndon Johnson ran for a while too and then pulled out because of the war problems… Things can change.”

And how likely is one of those good old recessions?

We’ve mentioned here in the past that Trump’s entire 2020 campaign will sink or swim on the strength of the U.S. economy.

But I don’t think there’s anything on this planet that would make Donald Trump drop out of a presidential race. Rain? Shine? Low polling numbers?

Politics and markets all mixed

Economy
Author Kit WinderPosted on 24th August 2020
Thank you all for your emails regarding my articles on bitcoin and crypto last week. I’m so pleased that many of you found them...

Economy
Author Pieter CranenbroekPosted on 16th August 2018
Employees lack the clout to curb CEO pay and politicians lack the desire. What about shareholders?

Economy
Author Jim RickardsPosted on 30th October 20155th July 2018
Saudi Arabia has developed a plan to destroy the fracking industry and regain its lost market share in oil. It's prepared to temporarily accept...