Apple CEO and man-who-looks-like-somebody’s-aunt Tim Cook hopped on CBS News last night to defend his company amid rumors of a government crackdown on big tech.

Cook told CBS reporter Norah O’Donnell that while some scrutiny is fair, Apple is not a monopoly (and please don’t scrutinise us too much).

“I don’t think anybody reasonable is gonna come to the conclusion that Apple’s a monopoly. Our share is much more modest. We don’t have a dominant position in any market,” said Cook.

Apple doesn’t share data on iPhone unit sales any longer. But reports indicate that Apple share of the smartphone market is drying up, shrinking as much as 17.9% last year. (Hmm. I wonder why they’re not eager to share those figures.)

Taking a Bite of the Apple

According to a lawsuit filed by developers in California yesterday, developers have no choice but to sell their iOS apps through Apple’s App Store, where the company will take a nice fat 30% cut.

“Apple blatantly abuses its market power to the detriment of developers, who are forced to use the only platform available to them to sell their iOS app,” said the developers’ attorney Steve Berman in a press release. “In a competitive landscape, this simply would not happen.”

(It’s worth noting that Berman won a similar lawsuit against Apple in 2016 over e-book price fixing — the most boring crime in the world — resulting in a $400 million settlement for customers.)

In last night’s interview, Cook dismissed Senator Elizabeth Warren’s call to break up the App Store because it sold products that compete with other apps on the platform.

“I strongly disagree with that,” he said. “Some people would argue, if you are selling a good, then you can’t have a product that competes with that good. But that’s an argument that takes you down the path that, Walmart shouldn’t be stocking house brands.”

When asked if he was worried about the ongoing trade war with China, Cook acknowledged that the tariffs could hurt iPhone sales. But he ain’t worried about being targeted by Chinese authorities or being put on their “unreliable entity” blacklist.

“The Chinese have not targeted Apple at all,” he said, “and I don’t anticipate that happening, to be honest.”

Cook might sound a little overconfident here. But it’s not that wild when you consider that nearly half the factories run by Apple suppliers are in mainland China.

Apple directly employs about 10,000 people in China. And the company estimates it is responsible for a further 3 million jobs there through its supply chains.

Which is why it’s in everybody’s best interest to stay all buddy-buddy, no matter how bad the trade war gets.

Apple shares surged 3.7% yesterday, after the company announced a $999 monitor stand, proving once and for all that any publicity is good publicity.

Despite the drop in smartphone market share, Apple’s renewed focus on its services has driven shares up 14% since the start of the year, compared to an 8.6% gain by the DJIA.

A federal judge has ruled that Dem lawmakers don’t have the authority to sue Trump for declaring a national emergency (and not so subtly told them to stop crying to the courts about every little thing Trump does).

In the last few months, the Dems have been successfully leveraging the power of the courts to impede Trump, further investigations into his finances, and avoid ever having to speak to their Republican counterparts.

However, they hit their first major stumbling block yesterday, as a Trump appointed judge ruled they could not sue the president over a plan to divert $6.1 billion from the military to build his border wall.

The Dems argued that the lawsuit should be allowed on the grounds that 1) they had exhausted every other option. And 2) the emergency order violated the Constitution Appropriations Clause, which grants Congress authority over the allocation of federal funds.

Judge Trevor McFadden disagreed, writing that “while the Constitution bestows upon members of the House many powers, it does not grant them standing to (drag) the executive branch into court claiming a dilution of Congress’s legislative authority.”

He went on to say that a “lawsuit is not a last resort for the House,” pointing to “several political arrows in its quiver to counter perceived threats to its sphere of power.”

McFadden puts his finger on the key problem with modern American ultra-partisan politics here. There is no actual “politics” anymore.

No discussion. No deals. No compromises. None of the wheeling and dealing essential to making a two-party system work.

Instead, we have a bunch of idiots smashing their heads off each other and trying to circumvent the process with loopholes and legislative back alleys.

And all that gets us is a bunch of bumped noggins and a lot of very angry, frustrated, and exhausted people.

Even this decision doesn’t get actually get anyone anywhere. The funds for the wall have already been blocked by an Obama-appointed judge in California in a completely separate lawsuit.

What’s your read on this? Do you think its all [insert name of rival party]’s fault? Or is this a systemic problem that’s infected the system over time?

Anyway. Sermon over. Meanwhile on the other side of the aisle…

In a rare show of defiance, Republican senators are speaking out against President Trump’s plan to levy tariffs on Mexican goods. (Huh, there must have been a spine sale in DC this weekend.)

Senate Majority Leader Mitch McConnell expressed himself with his usual brand of turtle-like caution, saying “there is not much support in my conference for tariffs, that’s for sure.”

But other party members weren’t quite so coy, stoking the fires of rebellion in a closed-door meeting with two administration officials.

Reportedly, Oklahoma Senator James Lankford said the administration “is trying to use tariffs to solve every problem but HIV and climate change.” (Yeah, let’s hit HIV where it counts. Its wallet.)

Cramer said he could see as many as 20 Republicans opposing the tariffs if they are brought to the Senate floor.

Wisconsin Senator Ron Johnson warned the officials the administration ought to be concerned about another national emergency act to vote.

“Tariffs are not real popular in the Republican Conference. This would be a different vote… This would certainly give me great pause.” (You know, because free trade is their whole thing.)

Meanwhile, across the pond in London, Trump told reporters that the tariffs are “likely” to go in place next Monday and said his party would be unwise to defy him. 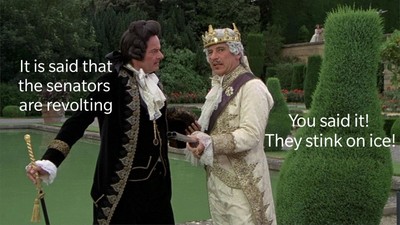 American Farmers Are Having a Corn Crisis

OK folks, the U.S. are now officially on track for one of the worst corn harvests in history.

Corn is typically the biggest U.S. crop by acreage (They use it in everything. Give it 10 years and even the meat will be corn.)

But this year, as non-stop heavy rain left fields saturated and unworkable millions of acres of land earmarked for corn (pun intended) have gone unplanted.

Now the weather is finally starting to dry up. But it’s already too late in the year to plant corn. Corn farmers are left with three options, none of which are particularly appetizing (unlike corn, which can be magically turned into liquid sugar).

According to grain-market analysts, farmers could seek coverage for 15 million acres worth of corn this year, far outstripping the previous record of 3.6 million acres of claims in 2013.

The wet weather has already started to push up corn prices corn, climbing 24% in the second half of May. But it’ll be some time before these price hikes are passed on to the consumer.

After a couple of bumper years of crops, we have a surplus of corn stored away. (We’ve got to work our way through all that old corn before we start on the fresh stuff.) In fact, it’s likely that they’ll start seeing the price of meat go up first, as cattle farmers are forced to pay more for their livestock feed.

Throw in a couple of trade wars and you’ve got yourself a full-blown agricultural crisis.

Farmers are already due to receive a $16 billion bailout package to pick up the slack from the trade war.

But the U.S. Agriculture Secretary Sonny Perdue said this week that he is looking into using that same package to give relief to farmers affected by the weather.

The No. 1 Reason to Try Weed

Economy
Author Pieter CranenbroekPosted on 18th December 20175th July 2018
Trump says the giveaway will create economic growth. There's just no evidence to back that up.

Economy
Author David StevensonPosted on 30th November 20175th July 2018
Recessions are bad news. For most of us, anyway...