Google (GOOGL) wants to build the city of the future… in Canada for some reason.

Google’s “city within a city” would serve as a testing ground for strange and innovative ideas to change the way we live in cities. The residents of this Googletopia will be the guinea pigs for every hot new trend in urban planning (but at least they’ll be living a very nice cage.)

At the heart of the proposal is a plan to create 91% more pedestrian space in the district and encourage people to actually go outside in the ridiculous Canadian weather.

Buildings will have “raincoats” that can be deployed to block wind and rain or provide a little shade over sidewalks. And the city’s robust cycling infrastructure includes heated bike lines for the winter. (I wonder who the madman who came up with “hot bike lanes” was?)

The proposal includes modular roads that can be transformed to accommodate more traffic or pedestrians depending on real-time data.

Oh, did I not mention there would be data? 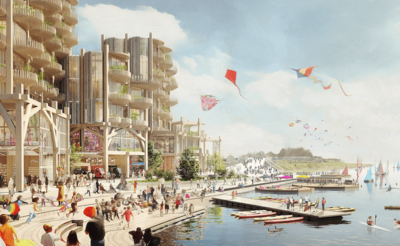 When you turn 30, your life force is reabsorbed into the Google City to power the fairy lights in the craft beer gardens.

It wouldn’t be a Google joint if there wasn’t reams of data (and potential privacy violations) pumping through its arteries.

Sidewalk Labs’ sci-fi metropolis would be a fully networked city. Every bench, sidewalk, and hot bike lane will be hooked up to an enormous city-wide WiFi system.

All day, every day, the city will gather data on its citizens like a jealous ex on Facebook. This will create mountains of data Google (or other companies) can use to refine its systems and make its creepy robot city the best creepy robot city it can be.

Google’s well aware how nervous 24-hour surveillance has a tendency to make folks so they’ve proposed handing off the data to an independent trust.

This watchdog would then decide what data Google can access or sell to companies that are in the market for urban planning data.

Google tried to get ahead of the pitchfork parade with three “data promises”:

But as you can imagine, folks don’t want Google ogling their data, regardless.

Waterfront Toronto Chairman Stephen Diamond, who is in charge of approving the proposal, said it’s “clear that Waterfront Toronto and Sidewalk Labs have very different perspectives about what is required for success.”

“These proposals raise important implementation concerns. They are also not commitments that Waterfront Toronto can make.”

If approved, Google plans to spend $1.3 billion of their own money on the project and hopes to drum up a further $38 billion from outside investors.

The Google buildings in this Google town will be Google constructed with mass timber, a bleeding edge building material as strong and fire-resistant as concrete and steel. And the company has vowed to keep the waterfront a livable area by allocating 20% of the living space to low-income housing and 20% to affordable middle-class housing.

Right now, this whole project is up in the air. But if Google got the go-ahead to build their data-driven Metropolis as planned, would you live there?

Driven by geopolitical uncertainty and a weak dollar, prices rose to a six-year high of $1,442. But I wouldn’t go digging up your backyard stash of eagles just yet. (That’s right. I know where you keep your gold!)

Gold is up 10.6% for the quarter, its biggest quarterly gain since 2016. But analysts at Credit Suisse, Morgan Stanley, and several other prominent Wall Street firms predict that gold could rise to record highs in the second half of the year.

“Given the magnitude of the base which has taken six years to form, we suspect we could even see a retest of the $1,921 record high,” said David Sneddon, global head of technical analysis at Credit Suisse.

The unfortunately-named Sneddon said in a note to clients that gold has established a multi-year base that provides a foundation for a “significant and long-lasting rally.”

Investors are piling into gold as a hedge against uncertainty in the markets. And unless we make peace in the Middle East and solve the Trade War tomorrow, gold could rise to record highs before the end of the year.

The U.S. have now entered the schoolyard name-calling phase of political negotiations with Iran. (It comes directly before the I’m-rubber-you-are-glue-phase and after lunch.)

President Hassan Rouhani of Iran told reporters this morning that the White House was “mentally retarded.” (Yikes. I think our boy Hassan needs to take a few classes at the One Last Thing School of Tasteful Insults in Parentheses.)

President Trump ordered a new set of sanctions on Iran this week. But Rouhani said that Iran would not be intimated and refused to come to the negotiation table until the sanctions are lifted (which is a pity because it’s a really nice table).

“Today, the Americans have become desperate and confused,” said Hassan. “This has made them take unusual measures and talk nonsense.” 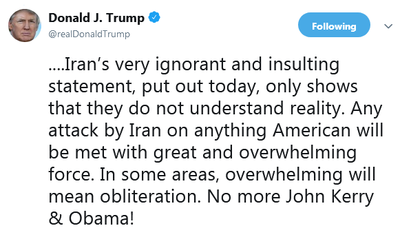 Right now, the U.S. military is on standby to obliterate “some areas.”

Secretary of State Mike Pompeo told reporters in Kabul that Rouhani’s remarks were “immature and childlike” but that President Trump would stay the course with economic sanctions.

“Know that the United States will remain steadfast in undertaking the actions that the president laid out in this strategy to create stability throughout the Middle East,” said Pompeo. “Which includes the campaign we have, the economic campaign, the pressure campaign that we have on the Islamic Republic of Iran.”

We’ll have more on this as the dumpster fire as it develops.

Mueller Will Testify: But Will He Say Anything New?

Economy
Author Jim RickardsPosted on 24th November 20165th July 2018
The election of Donald Trump can be compared in some ways to the election of Ronald Reagan in 1980.

Economy
Author Pieter CranenbroekPosted on 12th July 20175th July 2018
How can we expect the UK government to negotiate a good deal if ministers openly disagree about Brexit?