Goldman Sachs has reached into its golden sack and pulled out the old crystal ball for yet another round of election predictions.

According to its 2019 economic forecast report, President Trump is already in the lead, thanks to two major advantages he holds over his Dem rivals:

“The advantage of first term incumbency and the relatively strong economic performance ahead of the presidential election suggest that President Trump is more likely to win a second term than the eventual Democratic candidate is to defeat him.”

A proud history of seat warmers

Well, most of them do anyway. (Sorry, Jimmy C. and George Sr.) 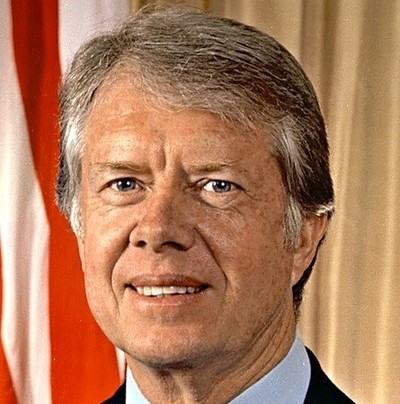 Jimmy’s mouth said “Change We Need” but his eyes said, “I’d rather be on my peanut farm.”

Of the 19 U.S. presidents who have sought reelection, only five have been forced to give up their office.

Going up against a sitting president is like trying to sit in a seat someone is already sitting in. (Literally as well as metaphorically.)

Goldman Sachs acknowledges in its report that the president’s less-than-50% approval rating might offset some of the benefits of this factor — but not totally.

One of the best predictors of an election is economic performance.

Sure, you might disagree with everything the president says or does. But if your pockets are nice and fat, there’s no need to go upsetting the apple cart over a couple of tweets (or a couple of hundred tweets).

However, the strongest indicator of who will win the election is the economic performance specifically in Q2 of the election year.

How will the economy look then? Well, let’s crank up the old crystal ball and see what’s going on in Q2 of 2020:

Goldman Sachs might have its fancy economists but I want to hear from you.
Do you think Trump has it sewn up with incumbent advantage?

Tax Refunds Are Down… But These Loopholes Could Change Everything

Tax Day is upon us!

And there’s some good news and bad news for the president’s reelection campaign. On the whole, folks paid fewer taxes overall this year. The problem is, most of them don’t realise it. 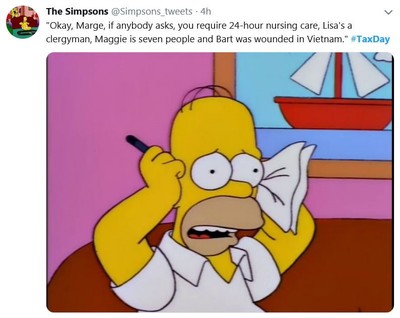 According to early reports, the number of refunds is down by about a million people this year. (That’s a lot of dads not getting their new lawnmowers.)

Not only are refunds down, but the number of people who ended up owing the federal government money shot up.

This is mainly due to a mismatch between the old and new tax regulations. If you didn’t refile your taxes with your H.R. department last year, there’s a good chance you got hit with a bill. (Some of us think H.R. probably should have mentioned something, JANET.)

On average these folks ended up paying less tax overall. But nobody likes owing the government money. (Except maybe the Finnish. They love paying taxes.)

And if folks don’t edit their withholdings now, they are going to owe even more next year. The new regulations were only active for nine months out of twelve last year. This year, we’re going twelve for twelve.

This highlights the biggest problem with the new tax program (for Trump’s reelection).

While most folks are actually paying less taxes, they don’t even realise it.

According to a study conducted by Survey Monkey, most people are getting tax cuts. But almost half of those who are getting cuts don’t know it.

How can people not realise they got a tax cut?

Isn’t that a little like not noticing you got a haircut?

Well, for most folks, the cuts came in the form of a little bit of extra money every month. For some, it might be small enough that they simply didn’t notice.

And then, if they didn’t update their returns they could have been hit with a big old tax bill this month, which makes it feel like you lost money (even if your overall tax burden was lower).

Good old George W. figured out the solution to this problem when he introduced his tax cut. Instead of it being added to your paycheck, he mailed you out a big check at the end of the year.

Who’s not going to vote for a guy that sends you big checks in the mail?

Of course, if you’re one of the hardworking middle-class, the money you saved from your tax cut is nothing compared to what Congress got off with this tax season. 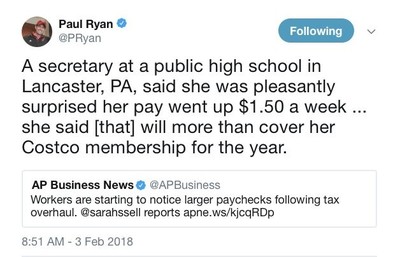 Is Paul Ryan desperately out of touch or just an idiot?

According to Robert Kiyosaki, who wrote two books on finance with President Trump, the system is rigged against the little guy:

The same rich congressmen who get MASSIVE political contributions from other rich people.

In exchange for writing in tax benefits to make them money!

Of course, rich people hate paying taxes. So what do these rich congressmen do?

They write in a bunch of loopholes they can take advantage of!

Robert says that no one person has a chance of finding all these loopholes inside a tax code that runs 6,550 pages long.

BREAKING: As we go to print, a huge fire rips through the Notre Dame Cathedral. The Spire and roof of the cathedral have collapsed. 400 firefighters are on the scene and working to save the artifacts inside. 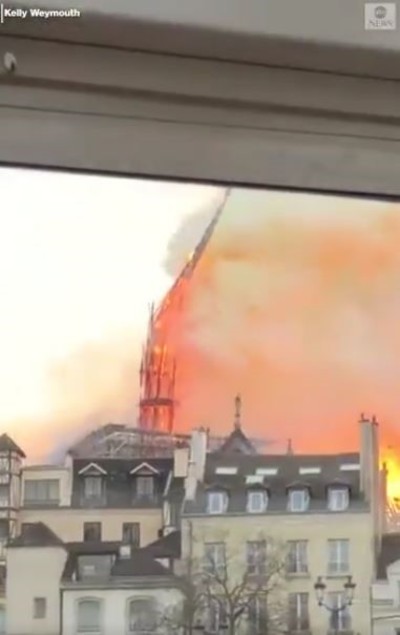 According to the IRS, there’s one thing most multimillionaires have in common (besides divorce and ice sculptures).

In 2018, your average multimillionaire had seven different sources of income.

At first glance, you might wonder how someone could do seven different jobs at once (I can barely do one).

But according to our team’s income expert James Altucher, most of these incomes aren’t traditional jobs like you and I would think of them.

They’re what James (and the young folk on Twitter) call side hustles:

“A side hustle is not a job,” says James. “A side hustle is a business you run in your free time that allows you the flexibility to pursue what you’re most interested in. It’s your 5-to-9 after your 9-to-5, so to speak. It’s a chance to delve into food, travel, fashion, fitness or whatever you’re passionate about while keeping your day job.

Economy
Author David StevensonPosted on 8th March 20185th July 2018
The 'P' word is back. With a vengeance. Protectionism
Economy
Author Boaz ShoshanPosted on 5th October 20205th October 2020
As we head through October into the sunset of this damned year, let’s dwell on some of the few reasons to be optimistic, shall...
Economy
Author Kit WinderPosted on 27th May 202027th May 2020
Pizza Express, Byron, Carluccio’s, Jamie’s Italian… It seems that many household-name chains in the UK have been struggling financially in the last few years....