“We are nearing the longest bull market for balanced equity/bond portfolios in over a century, boosted by a ‘Goldilocks’ backdrop of strong growth without inflation. A 60/40 (equity/bond) portfolio has not had a drawdown of more than 10% since the great financial crisis,” says Goldman Sachs’ equity strategist Christian Mueller-Glissmann.

[Editor’s note: Below, David Stevenson examines how the current bull market investors are experiencing could soon come to an end.

If you’d like to find out how to protect your wealth in the coming months and years ahead, I would urge you to watch this special broadcast from ex-financial threat advisor to the Pentagon, Jim Rickards, now.]

US indices continue to power global equities. And no less a financial icon as Goldman Sachs has warned clients that the current bull market could soon end.

I look at this today, and also take a trip towards the Arctic Circle for an interesting take on how to handle a major economic downturn…

How long will the good times last?

“We are nearing the longest bull market for balanced equity/bond portfolios in over a century, boosted by a ‘Goldilocks’ backdrop of strong growth without inflation. A 60/40 (equity/bond) portfolio has not had a drawdown of more than 10% since the great financial crisis,” says Goldman Sachs’ equity strategist Christian Mueller-Glissmann.

“It has seldom been the case that equities, bonds and credit have been similarly expensive at the same time, only in the Roaring ‘20s and the Golden ‘50s”, he continues. “All good things must come to an end…there will be a bear market eventually.”

Here’s the chart (for which many thanks to Goldman) that sums it up: 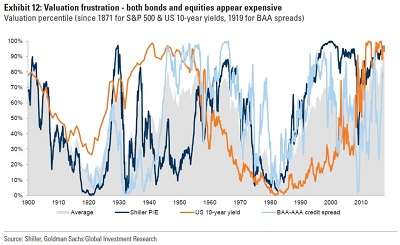 I know. At first glance it looks like some spiders have been unwell across the page.

But regular DR readers will be familiar with the three variables shown.

The Shiller PE (price-to earnings ratio, the dark blue line on the chart) came under our spotlight here. In short, it represents the market’s valuation of corporate profits across the whole economic cycle.

When the Shiller PE is right at the top of the chart, as it is now, this means that US stocks are very pricey.

US 10-year Treasury yields, pictured in orange on the chart and also recently featured in my DR column, are the returns paid to investors in American government bonds. There’s not much value to be found in these either.

The credit spread – shown here by the light blue line – shows the yield difference between BAA (i.e. relatively low-risk) bonds and their AAA (very low-risk) counterparts. This spread gauges the level of market anxiety about debt servicing capability. Right now, the high level of the light blue line suggests that bondholders clearly aren’t fretting that they might not receive their interest payments.

Indeed, with all three measures towards the upper end of the chart, it seems that investors are generally very relaxed about the current market environment.

Sure, you’ve probably seen this sort of valuation warning before. Thus far Wall Street, the driver of stock markets worldwide, hasn’t taken a blind bit of notice. The S&P 500 index simply keeps on rising. Anyone who cautions about high market valuations is told to ‘look at the scoreboard’.

Trouble is, relaxation and complacency tend to coincide. For the contrarian investor, this is exactly the time to become very worried. Prices always felt OK prior to every major market fall in history. As the old adage goes, they don’t ring a bell at the top.

How does this play out?

How will this degree of overvaluation play out?

Mueller-Glissmann and his team reckon it’ll be one of two ways.

Their most likely scenario is ‘Slow Pain’. That’s where low yields/high valuations continue in the absence of a major economic downswing. Future investment returns are lower than the past as valuations gradually contract, central banks print less new money and bond yields rise.

The alternative is ‘Fast Pain’. That’s where a big growth, inflation or interest rate shock – or a mix of these – crunches valuations. In other words, stock prices crater.

And remember, central banks have already used up a lot of their ammo after the last crisis. So if there’s another stock market crash or recession, they’ll be less able to ride to the rescue as they did in 2008.

A lesson from Iceland

So what could be done? To find out, let’s look at Iceland.

To say that the country had a tough time in the last major panic a decade ago would be a huge understatement. Yet Iceland has bounced right back.

The economy has boomed, partly due to tourists who account for 10% of the island’s population at any one time. GDP grew 7.4% last year, faster than China (6.7%) and India (7.1%), notes Zero Hedge. Free tourist attractions, though, mean there’s been a cost in terms of overused roads and creaking infrastructure, says the FT.

But Iceland recently voted in a fresh government, a coalition between the Left Greens, the Progressive Party and the conservative Independence Party, and the island’s new leaders have pledged to spend more on roads and other infrastructure in a 400bn kronur ($3.9bn) catch-up investment programme. This follows years of austerity and the creation of a state budget surplus since 2014.

Where will the money come from?

“According to Finance Minister Bjarni Benediktsson, the government has an ace that can help finance the spending: excess equity in its three largest banks”, reports Bloomberg. These “have leverage ratios [of] 16% to 18%, far above the 3% minimum, according to Iceland’s central bank”, meaning that Iceland has “hundreds of billions of kronur, way more than any other European nation, tied up in financial institutions”.

Granted, it helps that the government owns a big chunk of the country’s banking system, having bailed it out after the 2008 collapse (shades of RBS). And Iceland has happily put its bent bankers behind bars (unlike the US, UK and practically everywhere else). “Last time we checked”, says Zero Hedge, “29 had been jailed”.

But Iceland’s economic growth is set to drop rapidly. Economists surveyed by Bloomberg see GDP expanding by ‘just’ 4.2% while the central bank recently cut its 2018 forecast to 3.4% from 5.5%. So the coalition government’s infrastructure idea does sound like a good plan.

Further, it could be a handy model to follow elsewhere. In particular if central banks are hamstrung the next time there’s a crash and our own banks have to be bailed out with British taxpayers’ cash.

What? That won’t happen again, you say? Let’s wait and see…

Where will Bitcoin be in 10 years' time?

Investing
Author Sean KeyesPosted on 25th February 201612th July 2018
Ever heard of “the long tail”? It’s an idea from statistics in which companies make their money by selling a small quantity of a...

Investing
Author Pieter CranenbroekPosted on 30th November 2018
Concerns about Brexit have branded the UK "uninvestable". But the gloom is overdone. The UK is still highly investable.

Investing
Author Sean KeyesPosted on 17th September 201512th July 2018
Today's the day when the Federal Reserve, America's central bank, decides whether or not to raise interest rates. The financial press are all over...