The physical fundamentals are stronger than ever for gold.

The physical fundamentals are stronger than ever for gold.

Russia and China continue to be huge buyers. China bans export of its 450 tons per year of physical production.

Gold refiners are working around the clock and cannot meet demand. Gold refiners are also having difficulty finding gold to refine as mining output, official bullion sales and scrap inflows all remain weak.

In other words, the physical supply situation has been tight as a drum.

The problem, of course, is unlimited selling in “paper” gold markets such as the Comex gold futures and similar instruments.

There’s just not that much gold available. But in the paper gold market, there’s no limit on size, so anything goes.

There’s no sense complaining about this situation. It is what it is, and it won’t be broken up anytime soon. The main source of comfort is knowing that fundamentals always win in the long run even if there are temporary reversals. What you need to do is be patient, stay the course and buy strategically when the drawdowns emerge.

Where do we go from here?

There are many compelling reasons why gold should outperform over the coming months.

Deteriorating relations between the U.S. and Russia will only accelerate Russia’s efforts to diversify its reserves away from dollar assets (which can be frozen by the U.S. on a moment’s notice) to gold assets, which are immune to asset freezes and seizures.

The countdown to war with North Korea is underway, as I’ve explained repeatedly in some of these pages. A U.S. attack on the North Korean nuclear and missile weapons programs is likely by mid-2018.

Finally, we have to deal with our friends at the Fed. Good jobs numbers have given life to the view that the Fed will raise interest rates next month. The standard answer is that rate hikes make the dollar stronger and are a head wind for the dollar price of gold.

But I remain sceptical about a December hike. As I explained above, the market is looking in the wrong places for clues to Fed policy. Jobs reports are irrelevant; that was “mission accomplished” for the Fed years ago.

The key data are disinflation numbers. That’s what has the Fed concerned, and that’s why the Fed might pause again in December as it did last September.

We’ll have a better idea when PCE core inflation comes out Nov. 30.

Of course, the Fed’s main inflation metric has been moving in the wrong direction since January. The readings on the core PCE deflator year over year (the Fed’s preferred metric) were:

Again, the October data will not be available until Nov. 30.

The Fed’s target rate for this metric is 2%. It will take a sustained increase over several months for the Fed to conclude that inflation is back on track to meet the Fed’s goal.

There’s obviously no chance of this happening before the Fed’s December meeting.

And a weak dollar means a higher dollar price for gold.

Current levels look like the last stop before $1,300 per ounce. After that, a price surge is likely as buyers jump on the bandwagon, and then it’s up, up and away.

Why do I say that?

There’s an old saying that “a picture is worth a thousand words.” This chart is a good example of why that’s true: 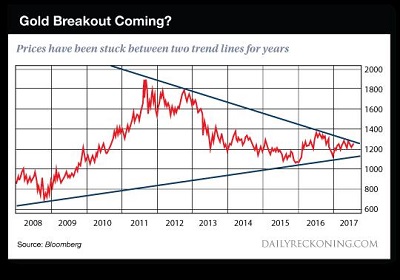 Gold analyst Eddie Van Der Walt produced this 10-year chart for the dollar price of gold showing that gold prices have been converging into a narrow tunnel between two price trends — one trending higher and one lower — for the past six years.

This pattern has been especially pronounced since 2015. You can see gold has traded up and down in a range between $1,050 and $1,380 per ounce. The upper trend line and the lower trend line converge into a funnel.

Since gold will not remain in that funnel much longer (because it converges to a fixed price) gold will likely “break out” to the upside or downside, typically with a huge move that disrupts the pattern.

The evidence overwhelmingly supports the thesis that gold will break out to the upside. Central banks are determined to get more inflation and will flip to easing policies if that’s what it takes.

Geopolitical risks are piling up from North Korea, to Saudi Arabia, to the South China Sea and beyond.

The failure of the Trump agenda has put the stock market on edge and a substantial market correction may be in the cards. Acute shortages of physical gold have also set the stage for a delivery failure or a short squeeze.

Any one of these developments is enough to send gold soaring in response to a panic or as part of a flight to quality. The only force that could take gold lower is deflation, and that is the one thing central banks will never allow. The above chart is one of the most powerful bullish indicators I’ve ever seen.

Get ready for an explosion to the ups ide in the dollar price of gold. Make sure you have your physical gold and gold mining shares before the breakout begins.

The real reason gold is going to go up

Gold & Metals
Author Jim RickardsPosted on 5th September 201916th September 2019
Following the Panic of 1907, John Pierpont Morgan was called to testify before Congress in 1912 on the subject of Wall Street manipulations and...

Gold & Metals
Author Sean KeyesPosted on 19th February 20165th July 2018
You’ll have read a few different arguments for gold over the years. I just focus on one simple number: the US real interest rate.

Gold & Metals
Author Jim RickardsPosted on 14th November 201915th November 2019
Recent history has been a long and volatile ride for gold investors. Starting from a low of about $250 per ounce in mid-1999, gold...