I can’t believe I have to say this but…

This article about the 2020 presidential election contains spoilers for the first two episodes of Game of Thrones season 8.

Apparently, we’ve already reached the point in the pre-election madness where the candidates start talking about pop culture to let us know how human they are. (Can we Pokémon-GO back to talking about healthcare, please?)

This weekend, while house Dems were poring over the newly released 400-page Mueller report, Elizabeth Warren was writing the Game of Thrones op-ed nobody asked for.

In a gushing piece published in New York Magazine, Warren voiced her 100% support for Daenerys “Stormborn” Targaryen (AKA Khaleesi, AKA the Mother of Dragons, AKA Aunty) and her campaign to take over a magical fantasy land.

“Dany believes fiercely in her right to rule, but she despises what ruling means in the world she’s grown up in,” Warren wrote. “She doesn’t want to be a slave owner or a dictator.”

Although I have to question the wisdom of comparing yourself to a woman who believes she has the absolute “right to rule” and plans to assume that right with an invading army (and a couple of dragons). 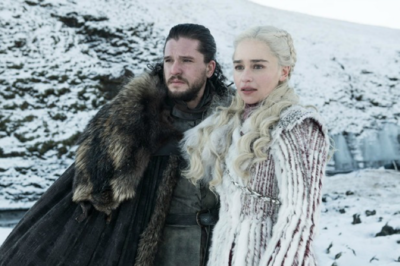 Warren tries to boil down the epic tale woven over eight seasons of HBO’s Incest Fantasy Hour into an allegory for the 2020 election.

“In the season-eight premiere, our Khaleesi finally arrives at Winterfell with Jon Snow and her army of the Unsullied to ‘save the North,’ not conquer it. She states her mission clearly in season seven: ‘I’m not here to murder. All I want to destroy is the wheel that has rolled over everyone both rich and poor, to the benefit of no one but the Cersei Lannisters of the world.’

“This is a revolutionary idea, in Westeros or anywhere else. A queen who declares that she doesn’t serve the interests of the rich and powerful? A ruler who doesn’t want to control the political system but to break the system as it is known? It’s no wonder that the people she meets in Westeros are skeptical. Skeptical, because they’ve seen another kind of woman on the Iron Throne: the villain we love to hate, Queen Cersei of Casterly Rock.”

Warren sees herself as the Daenerys Targaryen of the story (weird episode to make that comparison, Liz). Incidentally, this would make Donald Trump the Cersei Lannister of the story (they do have the same hair).

But Warren’s cool Game of Thrones analysis is based purely on Dany’s words. Over the course of the show, the Dragon Queen perpetrates violent atrocities, is consistently shown to be a short-tempered hypocrite who believes she has a gods-given right to rule the world.

Even with just four episodes left, it’s entirely possible that Dany will end up the final villain of the story. After all, this is the Game of Thrones, senator. “You either win or die. There is no middle ground.”

I look forward to Liz’s post-finale op-ed. But for now, let’s have a little fun with this. I want you to tell me which politicians are which characters from Game of Thrones and why.

In tomorrow’s issue of One Last Thing, Bernie Sanders compares himself to Villanelle from Killing Eve.

Amidst a three-ring, two-year-long media circus, special Counsel Robert Mueller has somehow managed to stay out of the limelight.

But over the weekend, he blasted his way to the top of the book charts becoming Amazon’s No. 1 bestselling author in the world.

In fact, as of this morning, old Bobby appears three times on Amazon’s top five books for his breakout work The Mueller Report.

That’s right, folks. Despite the fact the report is available online for free, three separate publishers have hastily slapped a cover on it and are hocking it online for between $7.50 and $10.22 (before tax).

Hmm. I should definitely check out that book about singing crawdads.

The top spot is currently occupied by The Washington Post’s copy of the report, which is presented with “related materials” from two of its journalists. (Nothing says groundbreaking insight and analysis like “related materials.”)

Skyhorse Publishing is selling the report for $9.20 with an intro by Alan Dershowitz. And Melville House is selling copies of the report with no additional material for $7.50. (Okay. I could have done that.)

The Post’s version of the book (which legitimately got to the top spot fair and square, right Jeff?) is also available as an audio CD for $42.45. FOR A FREE REPORT.

Because the world is insane and there are no rules anymore, Ukraine has elected a president who just an actor who plays the president on TV. (In political science, this is only a few tiers above Dog Mayor.)

Volodymyr Zelensky won this weekend’s election in a landslide victory with 73% of the vote. (Despite the obvious advantage of being an actual politician, the incumbent Petro Poroshenko barely mustered an embarrassing 24%.)

Zelensky is best known as the star of political satire Servant of the People,in which his character accidentally becomes the president of Ukraine.

It’s basically the plot of Dave or King Ralph, where a grossly unqualified person is thrust into the position of power. (Which will also be the plot of the movie adaptation of Zelensky’s presidency.) 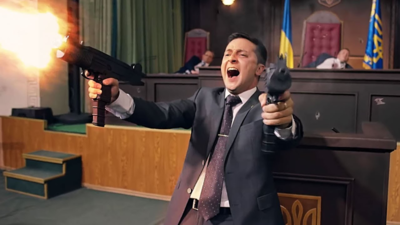 Having never seen the show, and based off this picture alone, I can tell it’s probably very good.

Zelensky’s campaign was light on discussions of specific policy and instead built off his natural charisma. (I wonder why.)

So nobody has any idea of what kind of president this guy will actually turn out to be.

Zelensky is trained as a lawyer, so at least he’s got a legal foundation to build on. But political analysts worry that he doesn’t have the backbone or background (or back support) to stand up to Vladimir Putin.

In the spirit of the entire world losing its mind, who is a totally underqualified person you’d like to see as president of the United States?

(I wouldn’t mind a Dog President. Although a four-year term would technically be 28 dog years and that’s got to break some law.)

The Night of the Living Dems

Economy
Author Shane OrmondPosted on 21st May 201922nd May 2019
Well, it’s starting to look like the hippies were right all along. (About weed. Not about the Grateful Dead.) Apparently, marijuana has some sort...

Economy
Author Sean KeyesPosted on 26th April 20165th July 2018
The mainstream media say Apple’s fast-growing days are over. They have it wrong. iPhone growth isn’t slowing down. In fact, it's only growing faster.