The folks around the One Last Thing watercooler this morning are frothing at the mouth for yet another overstuffed superhero movie hitting theatres today. (In my day, superheroes had the decency to stay in their own movies.)

But there’s only one epic saga about power and corruption I’m interested in.

The Legend of Healthy Holly: Embezzling is Fun

Early this morning, the FBI and IRS raided the homes and offices of Baltimore’s Mayor Catherine Pugh, as well as several other key locations across the city.

Officials refused to confirm if the raids were related to the Healthy Holly scandal that has dogged Mayor Pugh’s office for the last few months. (But they definitely are.)

Out of the Loop? Mayor Pugh leveraged her position on the board of the Maryland Medical System to secure a $500k children’s book deal. Most of the books are unaccounted for and possibly were never printed in the first place.

Separately, Kaiser Permanente paid Pugh more than $100,000 for copies of the books while the company was seeking a lucrative contract to provide health insurance to Baltimore city employees. (Spoiler: they got it!)

According to The Baltimore Sun, Pugh’s company Healthy Holly LLC took in at least $800,000 for the books since 2011.

Simultaneously, FBI agents raided the Maryland Center for Adult Training, a non-profit once chaired by Pugh, and the office of Pugh’s attorney, Steven Silverman. (Sigh, it’s so hard to make time for yourself to shred documents these days.) 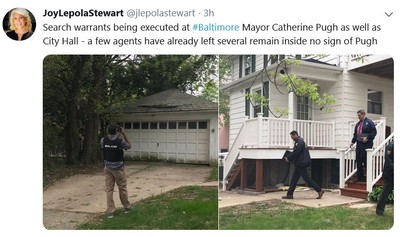 Maybe she’s researching her next Healthy Holly book down in Panama.

The mayor/most-wanted children’s author has been conspicuously missing from the spotlight for the last few weeks. Pugh’s office claims she is struggling with some health issues. But Pugh’s “health issues” conveniently reared their head just as the State Prosecutor’s investigation into the Healthy Holly books started heating up.

This whole fiasco is giving the residents of Baltimore a bad case of Déjà Vu. In 2008, state prosecutors searched the home of Mayor Sheila Dixon, who became the first Baltimore mayor to face criminal charges and was convicted.

For the last year or so, I haven’t been paying much attention to Bitcoin or the crypto world in general. (Or my personal health, but that’s not relevant.)

It’s not that I’ve lost interest in the whole crypto thing. A digital, decentralised currency is too fascinating to be written off as a fad.

I’ve started watching crypto more closely since the start of the year. Bitcoin started to move again. And in the last month alone, it’s shot up more than $1,500.

The trading volume on Tuesday was off the charts, at about 404,000 confirmed transactions. It was the highest network activity Bitcoin has seen since January 2018 when the price was well above $10,000.

After an inordinate amount of humming and hawing, former Vice President Joe Biden has thrown his hat in the ring for the 2020 presidential election. (And boy, is that ring getting full of hats.)

Too long, didn’t read: Democrats are salivating at the proposition of a moderate candidate with name recognition. Meanwhile, the Republicans are finally getting in the #MeToospirit.

Biden enters the race a little late in the game. But simply by virtue of being good ole Joe Biden, he’s already at the head of the pack. 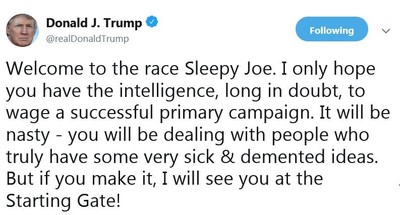 I genuinely think this is the nicest thing our President has ever said on Twitter.

Joe hit the ground running with an eight-point lead on President Trump. And is positioning himself as the only way a Democrat could possibly win. (Though Joe has gotten in trouble in the past for the way he “positions himself.”)

“If we give Donald Trump eight years in the White House, he will forever and fundamentally alter the character of this nation, who we are. And I cannot stand by and watch that happen,” Biden said on social media today. “The core values of this nation, our standing in the world, our very democracy, everything that’s made America is at stake. That’s why today I’m announcing my candidacy for president of the United States.”

Joe’s term as vice president earned him a lot of goodwill among Democrats.

As a moderate, he seems like a safe bet for centrists and the more conservative Democrats. But whether or not he can appeal to the more radically liberal voter base that’s emerged since Trump’s election is another story altogether.

On the campaign trail, Joe will have to defend decades of policies which no longer align with the Democratic parties more liberal agenda. And then there’s the creepy uncle touchy thing. (At least if he gets elected, the Secret Service would put some distance between him and the ladies.)

Election 2020 just got a lot more interesting folks. But what do you think?

Did Joe make a big mistake entering an already overcrowded race? Is he the moderate the Dems need to attract a more conservative voter base? Does he have any chance against Trump?

There’s a blooming industry rapidly creating jobs all across the United States.

These jobs range from retail workers to farmers to high-powered corporate execs.

Yes, once again I’m talking about the young and hungry cannabis industry. (Maybe it’s because it’s the most exciting opportunity in the U.S. right now. Maybe I just like all the puns.)

Even though weed is still a sticky issue on a federal level, the “legal cannabis” industry is now the fastest growing job creator in the U.S., according to job listing sites like Indeed and ZipRecruiter.

Many of the jobs listed on these sites are low paying, unskilled work — like the budtenders who sell weed at dispensaries and draw down about $25,000 a year on average. Or the field workers who make $10 to $15 an hour snipping weed.

But analysts predict that as the industry expands, there will be an increased demand for higher paid positions, such as software engineers, chemists, and even nurses. And we’re scheduled for some rapid expansion as soon as the government goes ahead with its plans to fully legalise.

We’ll have more on that in a future issue of One Last Thing. Sit tight.

More of your Brexit views

Economy
Author Pieter CranenbroekPosted on 4th January 20175th July 2018
The greatest anomaly of our times: billionaires are elected to fight the working-class battle.

Economy
Author Pieter CranenbroekPosted on 14th November 2018
Depending on which data sets you're looking at, the UK economy could either be in trouble or doing just fine.