Roll up, Roll up!

Put a dog whistle in a shoe, cure your flu!

This juice might not cure your cancer, by why not give it a chance-a?

If you’ve been diagnosed with Alzheimer’s… I dunno, eat more eggs or something.

For as long as there have been folks who are sick, scared, and desperate, there has been a predatory class of gentlemen who will sell you a magic bottle of brown to cure whatever ails you.

But baby, oh baby, was the age of the internet made for these people.

These sites have custom AI-based infrastructures where dumb and dangerous ideas spread like wildfire (or like a bad rash that you rubbed garlic on).

Depending on what you click on and where you visit, you might rarely see this kind of content. But according to a new report by the Wall Street Journal, there are corners of these platforms overrun with bogus cancer treatment claims and dangerous misinformation.

Common faux treatments include injections of baking soda (which will get that cancer out like a red wine stain on a rug) and miracle juice regimens. (Of course. Even cancer hates kale.)

And the algorithms on these websites target this garbage at those who are most vulnerable.

As a breast cancer survivor in our office told me: “There’s so much fear when you get diagnosed. In the back of your mind, a voice keeps repeating ‘you have a lethal disease.’ These bogus offers of remedies, of hope, are unconscionable. Too many folks want to believe the old ‘what if?’ I know of maybe two folks who took alternative treatment and each returned to the traditional chemo/radiation in the end.”

Before Mr. Young went to jail in 2016 for practicing medicine without a license, he was earning $5 million promoting his dangerous treatments online. Weeks after getting out of jail, Young was back online pushing baking-soda injections and juicing regimens.

Facebook responded to the report saying it would take steps to “down-rank” unproven medical claims on its platform.

“In order to help people get accurate health information and the support they need, it’s imperative that we minimize health content that is sensational or misleading,” Facebook said in a statement.

However, we don’t know what criteria it will use to judge what constitutes “accurate health information” or how effective “down-ranking” the content will be.

After all, Facebook makes a pretty penny advertising all this dangerous crap.

Now, if you’ll excuse me: I feel a flu coming on and I don’t want to be sick for the 4th of July, so I’m going to put a live frog under my hat and rub mustard on my genitals.

Canopy Growth Corp. blindsided investors this morning when it ousted co-CEO and co-founder Bruce Linton. (It’s easy to be blindsided when you’re high all the time.)

“Creating Canopy Growth began with an abandoned chocolate factory and a vision,” said Linton, channeling the ghost of a Victorian child. “The board decided today, and I agreed, my turn is over.”

Since then, Canopy Growth has gone on to be:

As the public face of the company, Linton has been instrumental in building Canopy’s image as a leader in a budding industry. And his many interviews and appearances on television have gone a long way to normalizing marijuana investment in general.

But sales are down this quarter and shareholders wanted to see a head roll. (Fun fact: heads don’t actually roll that well. The nose gets in the way.) 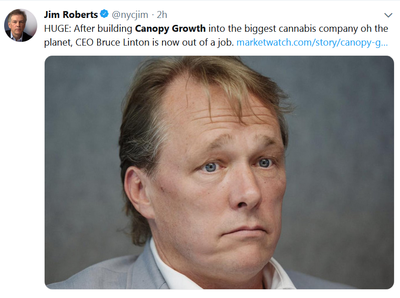 The media keeps a master folder of “Public Figures Looking Sad Photos” for occasions such as this one.

Constellation Brands, who owns a 35% stake in the company, was not happy with the company’s performance in the second quarter of recreational cannabis legalisation in Canada.

“While we remain happy with our investment in the cannabis space and its long-term potential, we were not pleased with Canopy’s recent reported year-end results,” said Constellation Brands CEO William Newlands on the company’s earnings call last week.

“However, we continue to aggressively support Canopy on a more focused long-term strategy to win markets and form factors that matter, while paving a clear path to profitability.”

Meanwhile, south of the border (I mean U.S.A. If you went to Mexico there, you’ve gone too far), steam is picking up for full-blown marijuana legalisation (and the boom in folks eating an entire thing of ice cream for lunch that goes hand-in-hand with legalisation.)

As reported by the Wall Street Journal yesterday:

“Nearly one in four Americans reside in a jurisdiction where the adult use of cannabis is legal, and 33 states regulate medical marijuana access by statute.

“At the federal level, members of the House of Representatives for the first time overwhelmingly voted in favour of legislation halting federal interference in state-specific marijuana laws. This historic vote is further evidence that politicians at the highest level now recognise the rapidly changing cultural and legal status of cannabis.”

After a single debate, former Vice President Joe Biden has squandered his once-commanding lead in the Democratic primaries. (And the only surprise is it didn’t happen sooner.)

According to the latest Quinnipiac University poll of Democratic and Democratic-leaning voters, Biden has plummeted eight points in polling, from 30% to 22%. (Note: If you think you might be Democratic-leaning, please see your chiropractor.)

For now, Obama’s BFF is still polling at the top of the field. But Senator Kamala Harris has snuck up on old Joe with a double-figure leap to 20%.

Harris’s big gain can be attributed to a single breakout moment in the debates when she attacked Joe on his civil rights record. That moment spoke to Black voters in particular, who are leaving the good ship Biden in droves. (Customers will be happy to know that the good ship Biden now has a strict no-touching policy.)

Elizabeth Warren was in third place with 14% of the vote.

Bernie Sanders dropped six points and two places to just 13% since the poll was conducted last month. Though that hasn’t hurt his ability to rake in the campaign dough. Yesterday, the Sanders camp announced it had raised $18 million in the second quarter of the year, with an average of $18 a donation.

Mayor Pete Buttigieg of South Bend, Indiana polled with 4% support. While none of the thousands of other Democrat candidates got more than 3% in the poll. (Please start dropping out, guys. I can’t keep track of all you. Especially you, Tim Ryan.)

Cell Phone Hacking is Ruining Lives: How to Protect Yourself

It was late at night, so Sean tried not to think about it and went to sleep. When he woke up, he was locked out of all his accounts and missing $100,000.

“This is still very raw (I haven’t even told my family yet),” Sean wrote in a post on Medium. “I can’t stop thinking about the small, easy things I could have done to protect myself along the way.”

“I lost north of $100,000 last Wednesday … This was the single most expensive lesson of my life.”

Sean was the victim of a SIM port attack.

This is when a hacker uses personal information to convince your cell provider to transfer your number to a new device.

The hacker then uses this device to log you out of all your accounts, change your passwords, and squeeze as much money out of you before you realise what’s going on.

Coonce admits he was rather sloppy with his online security, even going as far as to say that he “probably deserved to get hacked.”

But he’s developed a multiple-tiered strategy to make sure it won’t happen again and posted it online to make sure this doesn’t happen to anyone else.

Why the central bank club is bad for you

Economy
Author Shane OrmondPosted on 31st May 20193rd June 2019
Donald Trump took aim at millennials yesterday, threatening to levy as much as 25% on their beloved avocados. (And everything else that comes out...

Economy
Author Pieter CranenbroekPosted on 16th February 20175th July 2018
By the end of 2017, the two biggest EU member states, France and Germany, could be headed by two very pro-European leaders.

Economy
Author Sean KeyesPosted on 24th June 20165th July 2018
Now that the vote is done, how do you feel today? I've recorded a short video explaining the market's reaction to the leave vote....