Today’s lead story is brought to you by: Crippling addiction, Corruption, and the deaths of more than 200,000 American citizens.

As we reported earlier in the week, OxyContin peddler Purdue Pharmaceuticals are considering filing for bankruptcy in order to duck expected payouts in more than 1,600 lawsuits related to the opioid crisis.

Up until now, Purdue has tried to downplay the role of OxyContin in the U.S. opioid crisis. And why wouldn’t they? The “too dumb to know any better” strategy worked for decades for the tobacco industry.

But documents leaked during litigation reveal that Purdue executives were not only aware of the damage they were causing, they were actively fueling the crisis by encouraging deceptive sales practices.

In a series of internal memos, Purdue executives:

(It’s a small blessing that evil folks like to write their evil plans down and circulate them as memos.)

The documents directly implicate members of the Sackler family, who own a principal share in the company.

The Sacklers have a reputation as art-loving philanthropists who have donated sizeable sums of money to the Smithsonian and the Guggenheim. But if the details in the leaked documents are true, they’re mostly just a-holes.

Former president of Purdue, Richard Sackler allegedly once wrote that Purdue should “hammer” those addicted to opioids as “junkies” and “criminals.” Thus shifting the blame of the opioid crisis to those affected by it.

Meanwhile, board member Kathe Sackler was apparently developing a secret plan, known as Project Tango, from which Purdue could profit directly from the opioid crisis. (Hot tip: Don’t give your evil plans “cool” names. It makes you look like an idiot.)

The plan was to start selling a treatment for opioid addiction called Suboxone. The ominously named project had three obvious benefits for Purdue:

Birth of a New Opioid Killer?

Ultimately Project Tango was never rolled out. But just this morning, Purdue announced that the FDA has granted fast-track designation to a new emergency opioid treatment.

Purdue said it would not look to profit from the sale of a new drug. Which might be true. But the timing of this announcement makes it clear that this is little more than a PR move to offset the negative press from the leak.

The drug is little more than a bandaid. It’s an emergency treatment for patients suffering from an overdose. But it does nothing to curb addiction or the opioid epidemic itself.

There is one drug, which is not yet widely available, that has been shown to effectively reduce the spread opioid addiction.

According to a study published in JAMA Internal Medicine, in states where the drug is available, “there was about a 25 percent lower rate of prescription painkiller overdose deaths.”

President Trump’s declaration of a national emergency was blocked in the Republican-controlled Senate yesterday.

Twelve Republicans broke with the White House, handing a small victory to the Senate minority Dems and risking the ire of the President (who is pretty irie as it is even on a good day). 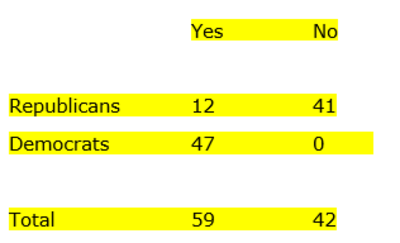 The Turn of the Screw

Why would Republicans side with the Dems here?

Well, there are a few folks who are worried about the legal fallout of using a declaration of emergency to go around Congress and the Senate.

Basically, the argument is, if Trump does this now, the Dems could do the same to ram through any policy they want when they get into power.

New Green Deal? Done and even newer and greener.

Usher in a Vegetarian Police State where flying in an airplane is punishable by death?

Well, probably not. But you get my point.

Senate Majority Leader Mitch McConnell originally opposed the declaration on these grounds. But he quickly fell in line when he realized President Trump was going go ahead with it anyway. (I like your new bicycle, Mitch. It’s cool the way it backpedals like that.)

Why use ten words when one will do?

In a follow-up Tweet, Donald went on to say:

I look forward to VETOING the just passed Democrat inspired Resolution which would OPEN BORDERS while increasing Crime, Drugs, and Trafficking in our Country. I thank all of the Strong Republicans who voted to support Border Security and our desperately needed WALL!

If Trump goes ahead with the veto, which seems likely (see: above Tweet), the Dems will have a hard time opposing him.

In order to block a presidential veto, you need a majority of 75% of the votes in both Congress and the Senate. And since Republicans control the Senate, the Dems would need more than 25% of the Republicans to come over to their side.

And that’s not going to happen.

The Republicans need to present a united front going into the 2020 elections. If McConnell wants to keep Trump in power, he’ll need to keep his Republicans in line.

That’s my read on this anyway.

What do you think? Is a Declaration of National Emergency necessary? Or is he just setting up the Republican Party for a kick in the teeth a few years down the line?

Two of Facebook’s top execs have jumped ship, as Zuckerberg sets sail for the private-sea. (Like privacy… get it? Look, they can’t all be good ones.)

Chris Cox, Facebook’s chief product officer, and the head of WhatsApp Chris Daniels made an unceremonious exit from the company yesterday.

No specific reason was given for the top execs’ departure. But the news comes hot on the heels of Zuckerberg’s manifesto for a new, privacy-focused Facebook.

Cox, in particular, is considered a major loss for the company. He was one of Facebook’s first 15 engineers and named “Facebooks most important exec not named Mark Zuckerberg” by Recode. (Trying fitting all that on a plaque.)

In his quittin’ note, Cox indicated that Facebook’s new direction was behind his departure:

This will be a big project and we will need leaders who are excited to see the new direction through.

(Translation: If Facebook ain’t violating people’s privacy, then I don’t want to be a part of it.)

Cox’s departure has not gone unnoticed by the investors. Facebook’s stock closed 3.5% down yesterday and continued to tumble when the markets opened this morning.

Rise of the Social Media Killer

In his new Book of Predictions 2019, our tech trends expert James Altucher predicted the end of Facebook’s market dominance.

Why should we pay any attention to him? Well, James is one of the few people who actually predicted Facebook’s success in the first place.

James predicted Facebook would be worth at least $100 billion live on CNBC, back in 2007. He was laughed off the air.

So, why does James think Facebook’s rule is over now?

As I see it, millennials no longer use Facebook. So that begs the question: What about the next generation of human beings?

Everybody looks at Facebook and says, “OK, it’s got a lock on social media.”

Over the past year, Facebook has fallen under fire countless times for company mismanagement, security breaches, and misuse of consumer data.

My prediction? It’s time for several new companies to take Facebook’s place at the top.

The potential there is huge…

In fact, James’s team has identified a new social media alternative that already has a market larger than Twitter, Instagram, and Facebook’s audience.

It looks nothing like today’s social media. But James believes this scrappy new upstart has the potential to bring a half-trillion-dollar social media empire to its knees.

In fact, a recent report shows that users spend three times more of their day on this new social media alternative than they do on Facebook.

And a tiny company currently sits at the center of an underground opportunity. In just a few months, James’s team saw this stock move 1,696%. That’s enough to turn a $1,000 investment into $17,960.

And that’s just the beginning. Most folks still have no idea this opportunity exists.

One Last Thing
The Winners of the 21st Century Prohibition

Yesterday, we took a look at the only folks who actually benefited from Prohibition.

Namely: any brewery that was resourceful enough to keep its doors open and was ready to start brewing as soon as the ban was lifted.

(And Al Capone. Al Capone made a $#@%-ton of money from Prohibition. But then he went to prison and eventually died of syphilis. So, a bit of a wash overall.)

Some folks built toilets. Others made cheese and ice cream.

It might have been embarrassing for the master brewers. But when the smoke cleared, these were the companies that went on to dominate the market and are still the leading names in the alcoholic beverage game to this day.

Planting the Seeds of Profit

Some folks might not be willing to admit it, but we are in a state of prohibition right now.

And it’s about to come to an end any day now. And there are folks ready and waiting, positioned for blast off just like those breweries who sold toilets.

You’ve probably guessed by now, (I haven’t been super subtle), but I’m talking about Marijuana Prohibition.

Whether you like it or not, the fact is: marijuana legalization is coming to the United States.

I can’t tell you the exact date that it’s going to happen. But I can say that anticipation is huge this year. And anticipation drives stocks higher.

Currently, over 60% of states have legalized marijuana in some form. Canada has legalized marijuana nationwide. And according to polls, 66% of Americans are in favor of recreational legalization — including a majority of Republicans and older voters.

94% of people are in favor of legalization for medical use in the United States.

When was the last time that many people agreed on anything in the United States?

I’ll tell you when.

1933. When the American people stood up and said with one voice, “WE LIKE BEER.”

We’ve seen a drastic increase in voter support over the past several years, and both Republicans and Democrats are on board.

There’s legislation in Congress right now with bipartisan support that’s set to change everything for the marijuana industry in 2019. If this legislation passes, it will be 100% up to the states to decide on their own marijuana laws.

Right now, the fact that marijuana is still illegal on the federal level is a huge problem for marijuana companies. (Try opening a bank account for a federally-prohibited business.)

But when this legislation passes, that will no longer be an issue. And the companies that are ready to go are positioned to dominate the market.

Of course, not every pot business will succeed. And some will do a lot better than others.

Prohibition Made These Companies Legends

Economy
Author David StevensonPosted on 28th March 20185th July 2018
The UK itself has just been voted the most hated stock market around. And history shows that such a degree of dislike is often...
Economy
Author Kit WinderPosted on 22nd February 202122nd February 2021
Earlier this year I spotted that in 2020, solar and wind generated more electricity in Texas than coal. Since 2015, the amount of wind-generated...

Economy
Author Shane OrmondPosted on 30th May 2019
Shares of Beyond Meat (BYND) spiked yesterday after the CEO of McDonald’s (MCD) said a whole lot of vague nothing on national television. The...