Bob Lutz is known as a car industry “legend”. He’s a cigar-chomping ex-marine. And he’s worked at the highest levels of Ford, BMW, Chrysler and GM.

Bob Lutz is known as a car industry “legend”. He’s a cigar-chomping ex-marine. And he’s worked at the highest levels of Ford, BMW, Chrysler and GM.

Lutz doesn’t pull punches in an article in this month’s Automotive News magazine. He says the internal combustion car is already dead. “Everyone will have 5 years to get their car off the road or sell it for scrap”.

A couple of years ago Lutz was considered a bit of a crank. Like back in 2008, when he said electric vehicles (EVs) were inevitable.

Not anymore. In 2018 everyone in the car business realised at once that EVs are coming. Very soon. And if they are going to have a future, car companies need to start investing in EVs now.

On Wednesday my colleague Callum Newman ran through the year in EVs. Because this was the year the stampede began.

It’s a simple story really — electric vehicles will soon take over from gasoline powered ones. They’ll be powered by lithium ion batteries.

Lithium ion batteries are made of a few obscure metals: cobalt, lithium, nickel, magnesium. I’ve identified cobalt as the “bottle neck” — the metal in shortest supply. The metal whose price is most likely to rise.

It’s a simple matter of supply and demand. Giant new battery factories are under construction. They’re going to eat up a huge chunk of global supply — more than 500% of today’s annual supply, if one analyst is to be believed.

Normally when a metal’s price goes up, the engineers get to work finding new sources of supply. They drill and test and, after a lag of a year or two, they open new mines. Supply and demand return to balance.

But cobalt isn’t like other metals. Almost all the global cobalt supply is a byproduct of mining other metals, like nickel and copper. So a rise in the cobalt price won’t necessarily lead to new mines. Unless the economics are right in the copper or nickel market, there won’t be any new cobalt supply coming onstream.

So electric cars are taking over, sooner than anyone expected. We’re going to need lots of cobalt for car batteries. But cobalt isn’t easy to come by, and it’s mined as a byproduct of other metals. Bottom line: cobalt prices could easily pass $50/pound.

I’ve found a way to play this — a Canadian miner which is sitting pretty on a giant pile of cobalt. It’s going to sell it off to the highest bidder.

The tip is reserved for Penny Share Letter subscribers of course. But now here’s Callum Newman’s take on how electric vehicles are leading to a supply crunch in the lithium market, which is another key component of electric batteries.

Even a small increase in electric vehicle puts
supply under pressure

Now, you might think the news around electric cars is hype. After all, global electric vehicle sales are currently less than 1% of total auto sales.

But even a conservative estimate of growth to 4.5% will put lithium supply under huge pressure.

Nor is lithium solely dependent on electric car uptake. The rise in renewable energy creates further demand for battery systems to store the power.

It’s worth taking a peek to see the potentially enormous rollout of ‘gigafactories’ all over the world. See this graphic here… 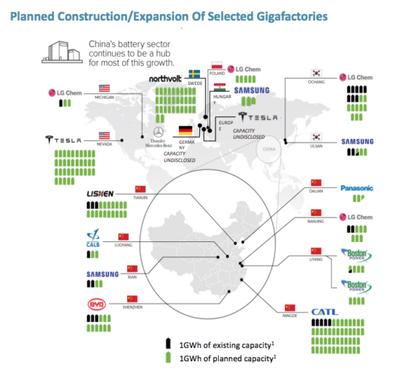 This bull market has already started

There’s also no doubt that lithium stocks have run hard again in the last few months.

I’m going to quote lithium expert Joe Lowry here to sum up the basic case: ‘There is much more risk associated with new supply than the growth in demand.’

What he means is that all these projections for electric cars are one thing, but actually getting these mines going is quite another.

Because so many of the stocks in this sector are explorers, any stock showing promising lithium reserves is hot at the moment.

But here’s the thing: A lot of these companies have nothing more than a lease, some test results and a plan.

They’re years away from producing lithium — even if they can raise the money and meet the onerous hoops every miner has to jump through just to get going.

I’ve followed a lot of these stocks over the last 18 months — and most of them are still exploring and drilling.

That makes them vulnerable to wild swings as sentiment and lithium prices gyrate.

It’s also NOT the same as having a producing mine ready to meet the huge upsurge of demand brewing right now.

I think the opportunities around this space will remain abundant.

Callum Newman
For Risk and Reward

Economy
Author Pieter CranenbroekPosted on 9th December 20165th July 2018
Best selling author Nomi Prins gave a talk at the Royal College of Surgeons about the future of the global financial system.
Economy
Author Kit WinderPosted on 17th March 202117th March 2021
I had a lovely weekend, until Sunday morning. The combination of weather improving, days lengthening and London opening on the horizon seems to be...
Economy
Author Sam VolkeringPosted on 21st June 2021
In today’s UK Uncensored… Dying form a telephone The rise and fall and rise and fall and rise of QR codes Two key innovations for...