There was a time when the North Sea was the most important oil region on Earth.

There was a time when the North Sea was the most important oil region on Earth.

This was during the oil crisis, in 1973, when OPEC shut down oil production and sent the oil price flying.

Back then the North Sea was one of the only sources of oil that wasn’t controlled by OPEC. At one point it was producing 5% of world supply – roughly equivalent to Iraq.

In its day North Sea oil was a bit like fracking is today: A new supply of oil, enabled by new technology, which helped break the OPEC cartel.

Supermajors like Shell and BP invested billions in the North Sea. They laid undersea pipes, built rigs, and employed nearly a million workers.

But oil fields don’t last forever, even monsters like the North Sea. They follow a cycle: After big investment, the field produces handsomely for a few years and then production starts to taper off.

The following chart shows what I mean. It shows the cash flows associated with a typical oil asset: negative at first, then massively positive, then tapering off, and then finally negative again when the asset has to be decommissioned. 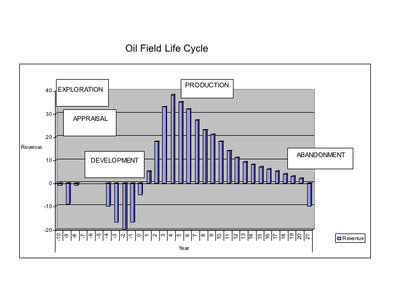 Today, the North Sea is getting the tail of this distribution. It’s days of peak production are passed. The only question now is, how much more does it have to give.

Supermajor oil companies are the right organisations to handle the middle part of that graph. Supermajors like Shell have the resources to build out infrastructure, and generate maximum profits from the good years.

When it gets to that phase, the “dwindling” phase, supermajors start to look elsewhere. They’ll prefer to send their money, equipment and manpower somewhere else where production is going hammer and tongs. And they’ll start to look at offloading the asset to someone else.

That “someone else” will be a smaller company, with fewer economies of scale but also lower costs. These companies will be optimised to get the most out of the last few years’ production on a field. A field that’s past its best can still produce a lot of oil – more than enough to transform prospects for a small cap oil business…

There are a lot of wells. Some supermajors, like Shell, have expressly stated they want to sell their assets. Other supermajors can’t be long following.

For an asset to be worth a supermajor’s time, it’d need to be producing in or around 10,00 barrels per day. But in the North Sea, according to Arden Partners, there are currently 541 assets producing 5,000 barrels per day or less. Oil production in the region is just a third of its 2.9 million barrel-a-day peak almost 20 years ago.

So the supermajors want to sell. And there’s still a good ten years’ production left. That’s an opportunity for deal-making small oil companies. They can build up a portfolio of smaller assets (something which takes quite a lot of work), generate economies of scale, and then perhaps get sold on again.

The best example of this in action is a tiny Aim-listed oil company called Serica. At the end of last year, Serica landed the right to three assets from BP. Within two months its share price had shot up 230%.

So where’s the next Serica to be found? Well I’ve been scouting ten Aim-listed oil plays which are looking to get in on this trend. They’re sniffing around for the right asset at the right price.

What am I looking for?

The structure of the deal is key. If you go back to my first graph, you’ll see how expensive the final decommissioning phase can be. The right deal for these oil assets needs to limit exposure to this. And that’s what Serica did well – it came to an arrangement with BP where it’d share some of the cash flows in exchange for a share of liability for decommissioning, and a cap on Serica’s total liability in the decommissioning phase.

I explored this in more detail in a recent issue of Microcap Millionaires and I published my first investment recommendation around the theme.

It likely won’t be the last, so if this area of investment interests you, click here to find out how to join Microcap Millionaires today.

Here's where the next great crisis originates

Investing
Author Sean KeyesPosted on 1st November 20165th July 2018
Without a differentiated product, a microcap company like ASOS wouldn't be able to grow in a sustained way.

Investing
Author Sean KeyesPosted on 25th September 201512th July 2018
What words come to mind when you think of penny shares? You might think of words like explosive… optimistic… dynamic… opportunity… or startup.

Investing
Author Kit WinderPosted on 12th June 2020
I wonder how many jobs that have been lost during this pandemic will return, and if not, what will replace them. Unemployment statistics are...