Investors can be forgiven for thinking they hit the trifecta last Friday.

Investors can be forgiven for thinking they hit the trifecta last Friday.

The US Bureau of Labor Statistics reported that unemployment had dropped to 3.9%, the lowest in almost 20 years.

The Federal Reserve Bank of Atlanta reported that its widely-followed GDP forecasting tool was showing projected growth for the second quarter of 2018 at 4%, exactly where Trump boosters like Larry Kudlow said it would be.

Finally, the Dow Jones Industrial Average rallied 332 points (1.39%), partly in response to the other good news. It was almost enough to make a trader sing, ‘Happy days are here again’…

The fact is that this good news hides more than it reveals. A look behind the numbers discloses a sobering outlook for investors.

The average rate of unemployment in the US from 1948 to 2018 is 5.78%. By these superficial measures, unemployment is indeed low and the economy is arguably at full employment.

When statistics don’t reveal everything

Of the 153 million with jobs, five million are working part-time involuntarily; they would prefer full-time jobs but can’t find them or have had their hours cut by current employers. Another 1.4 million workers wanted jobs and had searched for a job in the prior year but are not included in the labour force because they had not searched in the prior four weeks.

If their numbers were counted as unemployed, the unemployment rate would be 5%.

These are not retirees or teenagers but adults in their prime working years. They are, in effect, ‘missing workers’. The number of these missing workers not included in the official unemployment rolls is measured by the Labor Force Participation Rate, or LFPR.

Of course, there are limits to labour force participation. Some potential workers suffer chronic pain or other disabilities, some are retired, some are students, and some are at home raising children. Those are reasons why the LFPR has never been much over 67% since the data has been recorded.

But the drop in LFPR to 62.8% in the ninth year of an economic expansion is stunning. The US has a missing workers problem that accounts in large measure for the slow growth, persistent low inflation, stagnant wages, declining velocity of money and social dissatisfaction that have characterised the US economy since the end of the last recession in June 2009.

US labour markets are not tight. The US is not even close to full employment. It’s in a depression. That’s one reason why wages have been stagnant despite declining unemployment rates. 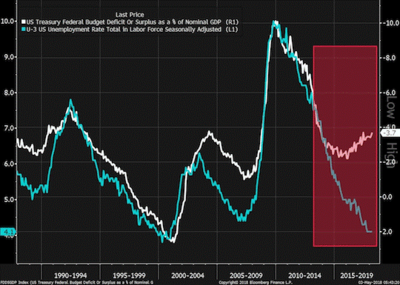 From the late 1980s through 2009, these two time series exhibited a fairly strong correlation. As unemployment went up, the deficit went up also because of increased costs for food stamps, unemployment benefits, stimulus spending and other so-called ‘automatic stabilisers’ designed to bring the economy out of recession. That makes sense.

But as the chart reveals, the correlation has broken down since 2009 and the two time series are diverging rapidly. Unemployment is going down, but budget deficits are still going up.

That’s unusual because, normally, when unemployment drops, the economy is getting stronger, benefit spending drops and the budget deficit shrinks. In effect, the US uses the good times to save for a rainy day (or at least tries not to spend as much as when it’s raining).

The US is going broke

This is good evidence that the economy is not nearly as strong as the low unemployment rate indicates. That’s because of the army of 10–15 million missing workers described above, many of whom are receiving benefits in the form of disability payments, early Medicare, food stamps or rental assistance. Instead of shrinking rapidly, these payments are stuck at near-recession levels.

As for the Atlanta Fed GDP estimate of 4% for second-quarter growth, that’s a statistical quirk based on the methodology it uses. It’s not that the number is bogus; it’s just that the measures suggesting stronger growth are reported earlier in the quarter and those suggesting weaker growth are not available until later in the calendar quarter. This means the estimates start high but come down to Earth as the quarter progresses.

The Atlanta Fed GDP estimate is useful but you have to know how to interpret it. In the first quarter, the estimate showed 5.4% growth but declined to 2% by the end of the quarter. (The actual reported growth was 2.3%, not too far from the Atlanta Fed estimate).

The same thing is happening again. I expect Atlanta’s number to decline from 4% today to 2% by mid-June, near the end of the quarter. That’s the same-old weak growth we’ve had since 2009. Nothing to write home about.

As for that stock market rally, it’s a temporary blip. Investors should be reminded that the stock market peaked on 26 January 2018, and is down about 10% since then notwithstanding occasional one-day rallies. The market has traced out a series of ‘lower highs’ after each rally. That’s a sign of a dying bull market and more declines to come.

So don’t believe the TV happy talk. Rigorous analysis of employment, debt, deficits, growth and stock markets reveals a dismal picture. Investors should consider lightening up on equities and increase their allocations to cash and gold.

Events will probably get worse from here.

You asked… here’s my answer

Economy
Author David StevensonPosted on 22nd February 2019
British politics is in a state of flux right now. No content with making a real mess of Brexit, our parliamentarians are furiously at...

Economy
Author Tom BulfordPosted on 5th August 20155th July 2018
I've been in the laboratories of Oxford University. Having an experimental brain scan...